It's expensive! Khushi Kapoor slips into a chic and dreamy lehenga for Antara Marwah's baby shower; it's cost will leave you stumped

Antara Marwah's baby shower was a glamorous event with Sonam Kapoor, Shanaya Kapoor, Khushi Kapoor and others in attendance. Khushi opted to wear a simple yet classy lehenga for the event. But it is expensive.

Sridevi and Boney Kapoor's youngest daughter Khushi Kapoor is no less than a fashion queen. She has a sense of styling which is quirky, elegant and nice. Every time she makes a public appearance, she makes sure to draw some attention with her fashion. This time around, we are gushing over her simple but pretty lehenga that she wore at Antara Marwah's baby shower. Yesterday, we saw the Kapoor cousins gathering to celebrate Antara's Marwah's baby shower and it was Khushi who appeared to be stand out from the rest. The leggy lass slipped into a sky blue and white lehenga by Anita Dongre. Also Read - Sridevi Kapoor welcomes new bride Antara to the Marwah family in the most adorable manner - view pic

Ditching all the glittery stuff that is usually picked for such occasions, Khushi Kapoor opted for lehenga with a crop top made with cotton and silk. The layered skirt is made of Nylon and Viscose. The skirt is of floral prints and asymmetrical in nature. The biggest attraction is that the skirt has a pocket. Now, don't all girls love it? But wait before you know the cost of this lehenga. This simple looking lehenga comes with a hefty price tag. On Anita Dongre's site, this lehenga which is named as The Forest Pixie is sold at Rs 95,000. WOAH! That's huge.

The lady who is yet to set her foot in Bollywood teamed this lehenga with big danglers and delicate bracelets. She kept her tresses open and looked flawless flashing her broad smile. We like the outfit but the cost has left us stumped. 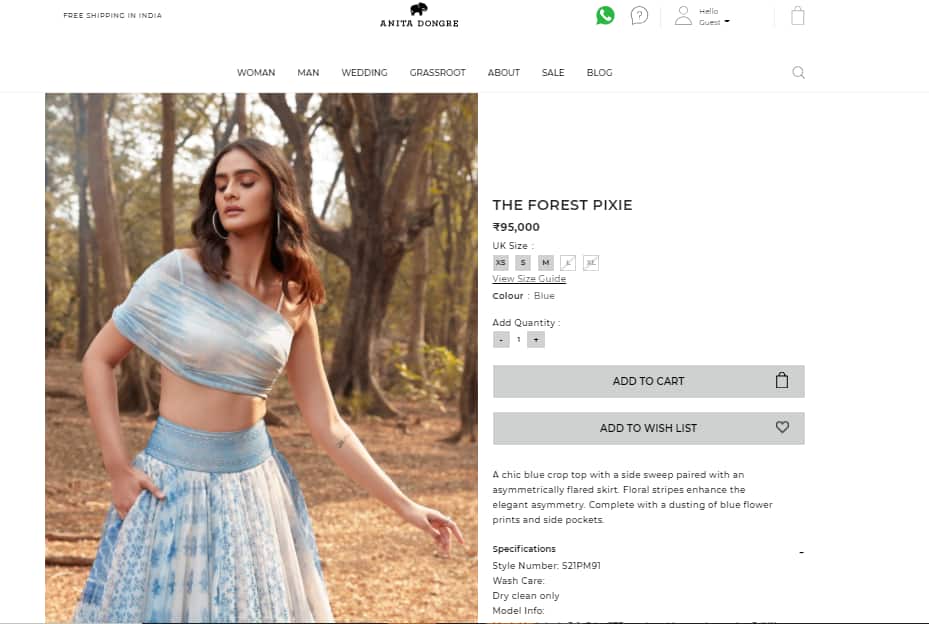 Meanwhile, talking about Khushi's Bollywood entry, we don't know who and how will she be launched. Father Boney Kapoor had sure stated that he won't be the one launching his daughter in Bollywood. To Bombay Times, he had said, "I would want Khushi to find her own footing. She will be launched by someone I respect and someone I feel secure and safe about."