Priyanka Chopra has shelled out a pretty penny for this striking orange cape style dress, which she wore at an event in Mumbai, last week.

Trust Priyanka Chopra to make heads turn every time she steps out. And while there have been a few unfashionable moments coming from her lavish wardrobe, we mostly dote her sartorial choices. Case in point, PeeCee’s recent outing in Mumbai, when she was on her visit to India, last week. The actress charmed the shutterbugs in a fiery orange statement dress and we are stunned how it adds to her boss lady persona. Priyanka had picked the fancy number from Australian designer Alex Perry’s resort 2019 collection. The body-hugging Nina Cape outfit accentuated her curves and the pleated cape added to her funky spirit. Check out Priyanka’s orange outing below: Also Read - Trending Hollywood news today: My Universe ft BTS x Coldplay gets ARMY excited, Nick Jonas relishes rock shrimp koliwada at wifey Priyanka Chopra's restaurant and more

And as we drooling over the fit and style of PeeCee’s dress, can you guess the price of this ensemble? The Bajirao Mastani actress has shelled out a pretty penny for this striking orange cape style dress. We’ve done some research on the internet and this glamorous ensemble is priced at £1705, which roughly translates to Rs 1,49,945. That is indeed an exorbitant figure, but then fashion doesn’t come cheap! Also Read - A peak into Priyanka Chopra and Nick Jonas' London home will make you crave for a life like that of our desi girl 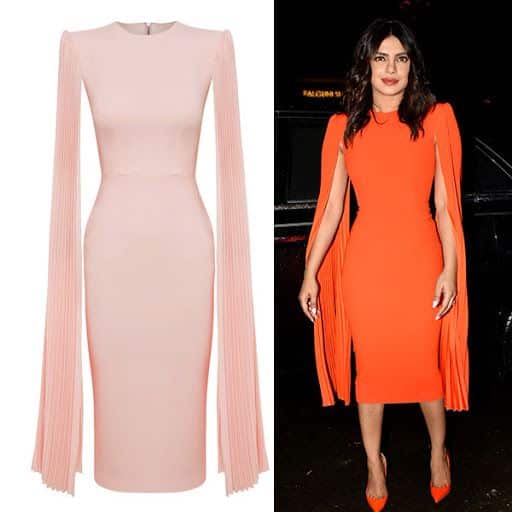 Priyanka returned home last week and was happy to be back in New York. The actress treated fans with a sun-kissed selfie and shared, “Home, sweet home." Interestingly, she is holding someone’s hand in the click and we guess it is hubby Nick Jonas. Check out her happy selfie below:

When in Mumbai, Priyanka wrapped up her next Bollywood outing The Sky is Pink and celebrated the same with a party. Priyanka shared on Instagram, “This movie is special to me on so many levels. Not just because Roy Kapur Films and RSVP Movies partnered with me on my first Hindi production... But also took the chance on me to bring to life a character and a true story that needed to be told.”

And it’s a wrap. This movie is special to me on so many levels. Not just because @roykapurfilms and @rsvpmovies (Sid and ronnie) partnered with me on my first Hindi production.. but also took the chance on me to bring to life a character and a true story that needed to be told. @faroutakhtar you made an amazing co actor all over again with all the laughter and fun!(you were missed tonight) and my amazing @zairawasim_ and @rohitsaraf10 who I’ve made friends for life with! This was the hardest loveliest experience. Thank you @shonalibose_ for your incredibly unique vision. I’m so proud of your faith in me. Thank you so much to Our crew who worked tirelessly for 10 months to make this special piece of cinema. I love you all. ❤️ See u at the pictures!!! ?? #skyispink ? ?