Guess the Price! Sonam Kapoor’s black tote has us hooked and the price tag justifies her taste!

On the work front, Sonam will be seen romancing Dulquer Salmaan in The Zoya Factor. The film is directed by Abhishek Sharma and is scheduled to hit the screens on September 20.

Sonam Kapoor and Anand Ahuja made us green with envy with all those drool-worthy postcards from Japan. After touring the picturesque locales and gorging on scrumptious food, Sonam and Anand returned to Mumbai last week. The couple walked the airport aisle, hand-in-hand and were colour-co-ordinated too! Sonam and Anand sported all-black ensembles, with their sneakers giving a break from the dark tones.

However, what caught out attention was Sonam Kapoor’s stylish tote, which comes from luxury brand Gucci. The actress is known for her lavish taste in fashion and this hand bag comes from the same league. So, no surprises here for the expensive price tag, this Bamboo Shopper leather tote costs $ 2,100 - which comes to nearly Rs 1,45,020.75. And that’s Sonam Kapoor’s rich taste for you. 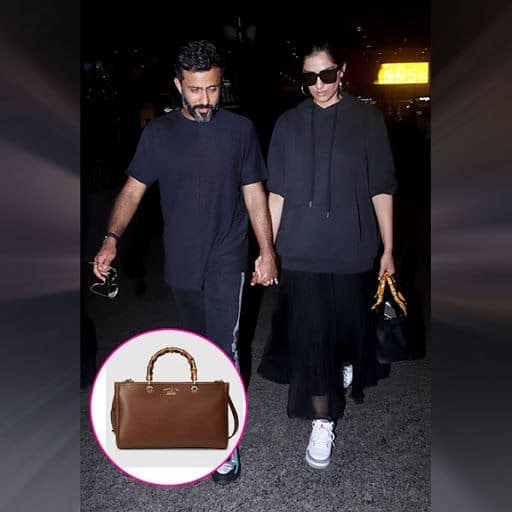 Up next, Sonam will be seen romancing Dulquer Salmaan in The Zoya Factor. The film is an adaptation of Anuja Chauhan's 2008 novel by the same name. The Zoya Factor is directed by Abhishek Sharma and is scheduled to hit the screens on September 20.