It's Expensive! Sayani Gupta's orange bikini look will cost you as much as a high end smartphone

Sayani Gupta who was recently seen in Four More Shots Please 2 had flaunted her perfect bikini body in the hot orange swimsuit and a pullover. Can you guess how much this two-piece and a pullover costs? Well, let's say you can buy a top brand smartphone with the same money.

Sayani Gupta made her Bollywood debut with Second Marriage Dot Com. She went on to feature in films like Fan, Jolly LLB 2, Article 15, Margarita With a Straw, Parched to name a few. The actress is currently exploring various characters in the web space. Sayani was recently seen in the second installment of Four More Shots Please. The actress' character was very much talked about because of her acting chops and her style statements as well. Also Read - When birthday boy Ayushmann Khurrana gave up on his Bollywood career and started playing at college gigs

If you have seen Four More Shots Please, Sayani Gupta could be seen in an orange bikini in the series. The bikini picture went viral as soon as she shared the photoshoot of the same. The actress never thought that she would do a bikini photoshoot, but you may never know unless you try it, right? And it's such a huge hit. Sayani looks drop-dead gorgeous in it and we cannot take our eyes off her. But do you know how much Sayani's orange bikini costs? Let's say, you can buy a high end smartphone in the same cost. Yes, you read that right! Also Read - Anubhav Sinha and Hansal Mehta announce the star cast of their action thriller – two BIG STAR KIDS to be launched

Well, the two-piece costs about Rs 19,000 while the pullover itself costs Rs 17,000. The swimsuit was from Shivan and Narresh, as was the pullover. We especially liked the mint-hued pullover with floral motifs. It just gives you that hippie vibes or beachy vibes that you may want to opt for this look as soon as the lockdown ends. Coming back to Sayani's whole look, the actress even wore a multi-string neckpiece which costs about Rs 1400. The overall cost of Sayani's look is about Rs 38,200. And we'll say, you can buy a top brand's smartphone in the same cost, don't you think? Also Read - Happy birthday, Anubhav Sinha: The director's next, Anek, with Ayushmann Khurrana is an unexplored spy film with a hefty budget [EXCLUSIVE SCOOP]

Meanwhile, have a look at Sayani's bikini avatar here: 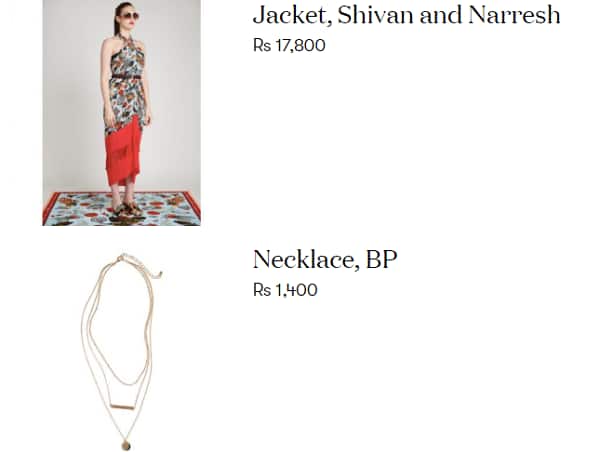 Don't you think it could be a perfect ensemble had you been on an island right now? Let us know by tweeting to us @bollywood_life.