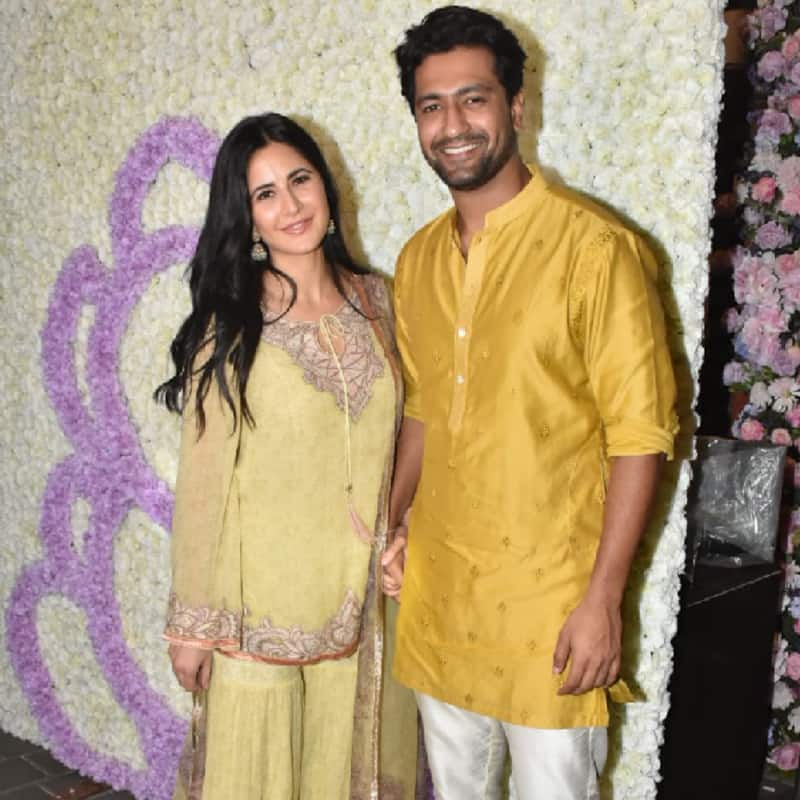 Katrina Kaif has worked with the best fashion designers. From Manish Malhotra to Sabyasachi, she has turned muse for many top designers. One of her favourites is Tarun Tahilani. We often see the diva picking some gorgeous outfits from the Taurn Tahilani collection. Recently, she visited Salman Khan's sister Arpita Khan's residence for Ganpati celebrations and she chose to wear a Tarun Tahilani outfit for the evening. She dressed in a yellow gharara
set and matched with her hubby Vicky Kaushal who dressed in a yellow kurta. Yes, he visited Salman Khan family too! Also Read - Katrina Kaif dances her heart out with kids in this viral video; netizens say, ‘she’ll be the best mother ever’

Talking about Katrina Kaif's pretty gharara set, it was lime yellow in colour with resham and zari embroidery on it. The outfit also had a red border to the top as well as on the sharara pants. She rounded off her look with a Poplin lycra dupatta. The actress as usual looked pretty but she has picked much better outfits in the past. Now, you want to know the cost of this set? The Tarun Tahilani set is worth Rs 89,900. Also Read - Mom-to-be Alia Bhatt relishes pizza; thanks Shilpa Shetty Kundra for fulfilling her midnight cravings

Are you willing to shell out so much money to dress up like Katrina Kaif? Well, there is no denying that the outfit costs a bomb but she is Katrina Kaif. She has all the luxuries at her feet!

On the work front, Katrina Kaif will next be seen in Phone Bhoot along with Siddhant Chaturvedi and Ishaan Khatter. She also has Tiger 3 along with Salman Khan. Even though Katrina shares a past with Salman Khan, she shares a very great bond with Dabangg Khan's sister Arpita Khan Sharma. She had even attended her wedding. Like it's said, some bonds never change!