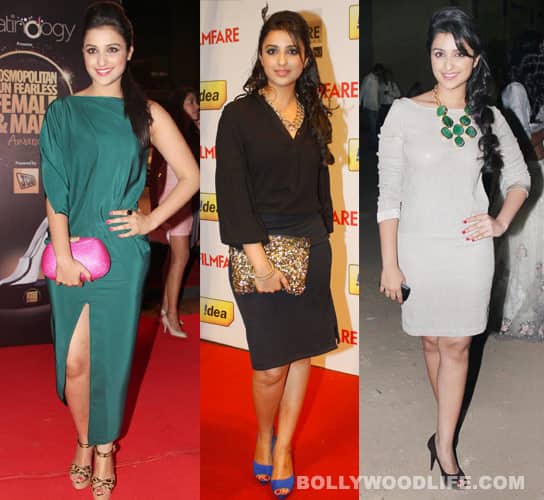 The loud and sassy babe is learning the ropes of dressing for B-town events and parties. But Parineeti still has a long way to go

As the Chopra chick is bagging awards one after the other for her power packed performance in Ladies vs Ricky Bahl, we thought of dissecting her style statement that she’s been flaunting at all the award functions lately. And to our surprise we were glad to spot the style evolution the babe underwent in such a short span of time. Luckily, Parineeti is blessed with the quintessential girl-next-door looks but she has not been taking much effort to glam it up. But that was only until we spotted her at the ‘Cosmopolitan Fun Fearless Awards 2012’. We were quite taken aback to see the ‘girl with the casual style statement’ transform into the ‘babe who cares about what she dons’. After seeing her insipid outfits at the Filmfare and Stardust awards, we thought Pari is in no mood to get into the dressy and sexy avatar. But recently we witnessed her sashaying around in a James Ferreira gown with a sexy front cut that she teamed with a hot pink clutch. Guess, Yash Raj’s blue-eyed girl and former Ms World Priyanka Chopra’s sister is slowly learning the rules of the starry Bollywood world. Now with all that motivation Parineeti, we expect you to up your style quotient a couple of notches higher!