Earlier in the day, a news report in a leading daily readout that TV actress Priya Bathija had accused her Daayan co-star Mohit Malhotra for inappropriately touching her while they were on the sets of the above-mentioned TV show. Although the story didn't quote Priya, it soon became viral amongst the digital medium. Shockingly, the reports have come out a few months after the show's leading actress Tinaa Dattaa had reported the similar incident against Mohit. The two later mended things between them. However, the article reignited the entire fiasco. Also Read - Hina Khan hints at breakup with Rocky Jaiswal in new post? Read deets

Actress Priya who according to her was not informed or asked about the story, soon took it to her social media to deny and rubbish the rumours. Priya posted a story on her Instagram denying that any of the published matter had taken place. Her Instagram story read, ‘Nothing such has happened, I don’t know from where this has come up! I expected Mid Day to contact me before putting up such news as it is very harmful content for any actor and somewhere it harms the bond also we make with our co actors on sets. So here is to clarify, “I PRIYA BATHIJA DID NOT GIVE ANY CONFIRMATION TO THE MID DAY TEAM REGARDING THIS ARTICLE”. If anything of such sort would have happened I WOULD HAVE BEEN VOCAL”. Also Read - Naagin 6: As we eagerly wait for the show, here's a quick NAAGIN QUIZ for all Naaglok fans

The actress chose to bold letters to express her disappointment and make it clear that nothing that has been reported had occurred. The actress who is going through a troubled time in her personal life, spoke to a portal and stated, "Somebody is planting this story, deliberately. It is in very bad taste," she said. When prodded further, Priya added, "If Mohit had got touchy-feely with me, I would've slapped him and not locked myself in vanity van! Mohit did not misbehave with me." Also Read - Uttaran actress Tina Datta goes topless and flaunts her sexy back in her BOLDEST photoshoot ever 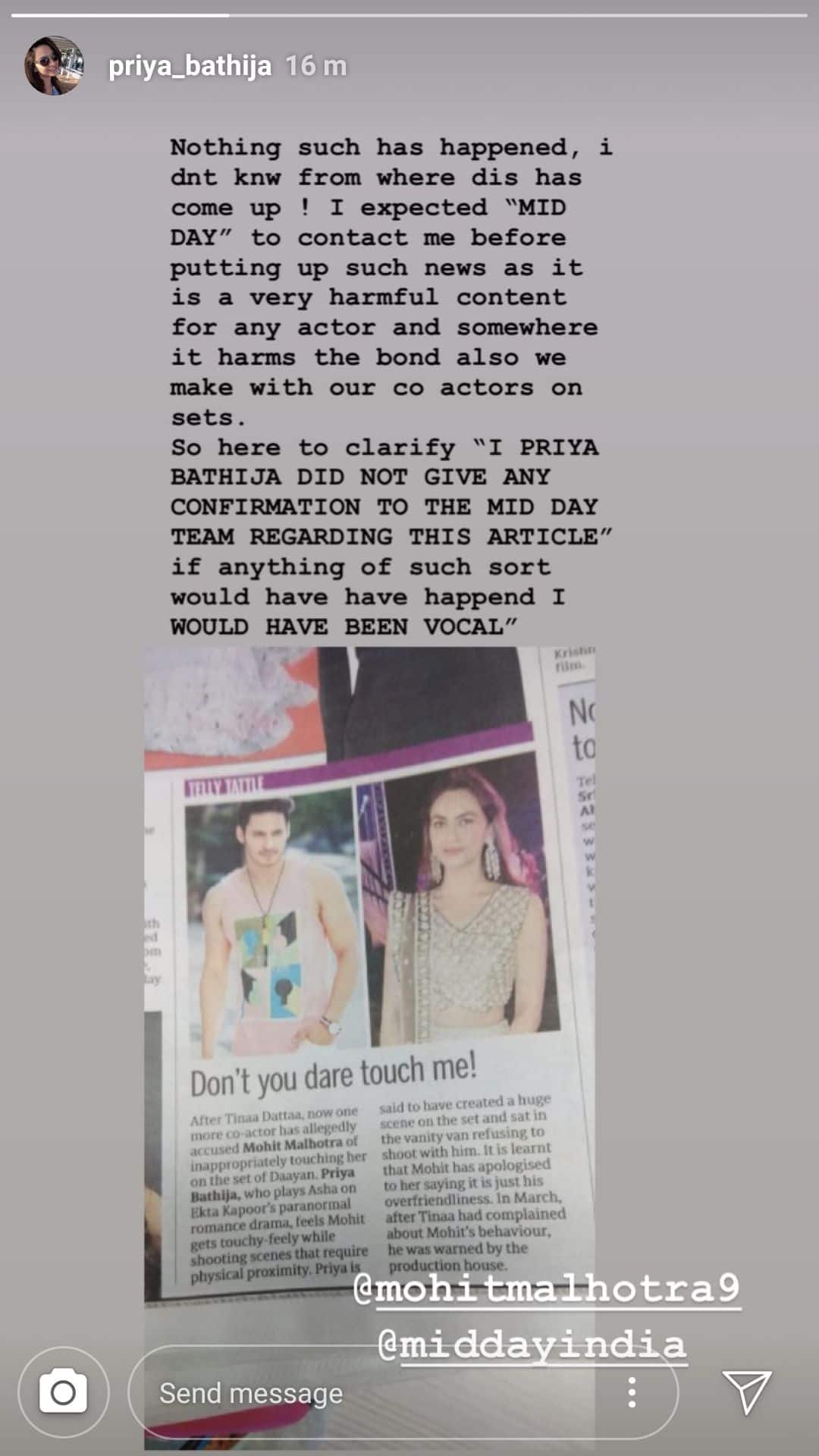 Mohit too refuted the reports and told the entertainment portal, "The story is completely false and baseless. I am sure if you speak to Priya she will say the same thing. We did not have any issues and the one which is being stated is completely out of question. I wish people notice our good work rather than count on random, baseless source-led stories."

Both Priya and Mohit are angry as their names have been misused and someone is trying to malign their image. And with Priya’s social media post, everything seems to be alright between the two.