Amongst supernatural shows, Nazar's promo was the best, feel fans

Fans loved Nazar's promo the most out of all supernatural shows like Kawach 2, Dayan and others. We guess it was Monalisa's outing that set it apart

In the past few months, we have seen a number of supernatural shows on TV. And the buzz around their promos is quite different from that around daily soaps. We recently saw the teaser of the upcoming Kawach 2 and it was quite scary. Prior to it, the makers of Daayan carried off a PR campaign that was quite extensive. From phone calls to telling people to share their eerie tales, it was a concentrated effort. However, when we conducted a poll, fans said that the promo of Nazar was the most intriguing one. Well, there are a few reasons for it. The concept of daayans on a daily show was an unexplored one. We had seen the naagins and chudails before. Also, the presence of Monalisa as the daayan was a huge X-factor. The former Bigg Boss contestant has a huge fan following in India's heartland. Also Read - Here's the first look of Ekta Kapoor's Dayan and it will remind you of Rajkummar Rao-starrer Stree 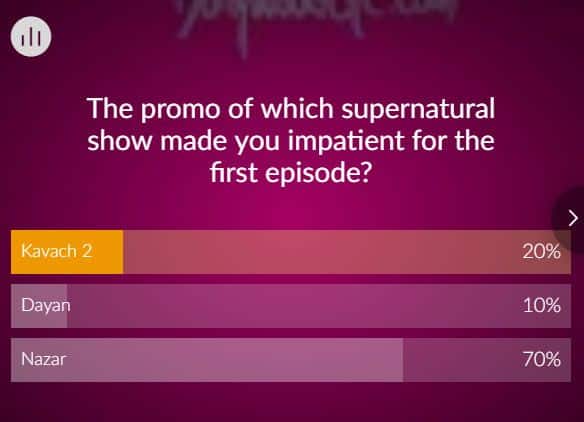 In Nazar, we have Monalisa playing a Daayan Mohona who gets married to a man and kills him. She has a son from him who gets rescued by the family. However, she tries to get her son, Ansh (Harsh Rajput) and troubles the family. In the meantime, they get him married to a girl (Piya), Niyati Fatnani who is blessed by the Goddess. The story has taken a leap with Ansh and Piya becoming parents. Stay tuned to BL for more updates!