Rubina Dilaik knows how to spit fire when needed. We saw that in Bigg Boss 14. Of late, the actress was subjected to immense trolling. A person who is from her fan club shared a throwback pic which was very badly edited. Rubina Dilaik posted the pic on her Insta stories with a message. Rubina Dilaik wrote, "I want to meet the genius who edited the "left" picture...and ask how badly beaten up was he/she with life..." The picture is from the time when she was crowned Miss Shimla. As we know, after her win she moved to Mumbai when she bagged a TV show through an audition. Her most famous stints have been on BB 14 and Shakti. Also Read - Bhool Bhulaiyaa 2 box office prediction: Kartik Aaryan starrer collects Rs 1 crore advance on day 1; Rs 4 crore for weekend – set for huge opening in metros and mass centres 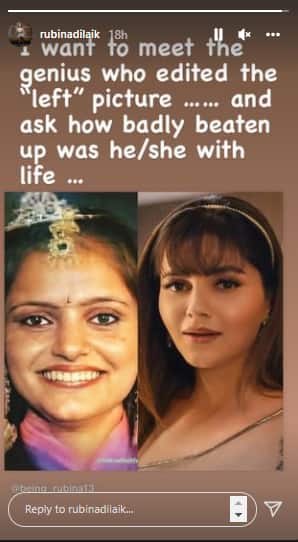 This is not the first time she has hit back at such low lives. The actress was called out for gaining weight after her COVID-19 diagnosis. Her fans said that she was being negligent and also her fashion sense left a lot to be desired. They even said that Rubina Dilaik was not pushy when it came to her career and did not hire the right kind of PR. She had called out them out as pseudo fans. The actress found support from many after her heartfelt post. Also Read - Dheeraj Dhoopar, Shailesh Lodha, Shivangi Joshi and more lead actors who quit popular TV shows and left everyone shocked

On the professional front, she has signed her first Bollywood movie, Ardh. The film also has Rajpal Yadav and Hiten Tejwani. In the movie poster, we could see her in a saree looking at the Taj Mahal Palace Hotel of Mumbai. In the past, Rubina Dilaik has done shows like Choti Bahu where she played Radha. Well, we love the actress for how she takes a stand for herself, every time!