Anupamaa, 5th January 2022, episode 446, SPOILER ALERT: Anu calls Anuj Bholuram for not realising her love for him. Anupamaa's writer Bhavna Vyas revealed that she included the word as she saw a lot of fans address Anuj as 'Bholuram'.

Anuj aka Gaurav Khanna and Anupamaa aka Rupali Ganguly are setting goals as lovebirds every single day. Until now, we saw Anuj's one-sided love story. However, we are getting a glimpse of Anupamaa's love for Anuj as well. Anu has fallen in love with Anuj, however, she hasn't confirmed her feelings for him yet. Anuj, on the other hand, is blatantly confessing his feelings out and about in front of Anupamaa without realising it. And moreover, he isn't realising Au's growing feelings for him. Anuj still believes that Anupamaa considers him to be his 'friend only'. And hence, MaAn shippers labelled him with the tag 'Bholuram'. And guess what? The writer, Bhavna Vyas has included the same in her script which will be seen in Anupamaa's episode tonight. Also Read - Anupamaa: Vanraj aka Sudhanshu Pandey happily poses with Madalsa Sharma and Anagha Bhosale forgoing his on-screen image – view pics

Bhavna took to her Instagram handle and revealed that same. "'BHOLURAM' Aap logo ke posts dekhke add kiya gaya hai script mein. #Maan fans," she wrote in her Instagram stories. Gaurav Khanna acknowledged it as well by sharing the story on his gram and giving it a thumbs up. Check it out here: Also Read - Taarak Mehta Ka Ooltah Chashmah trumps over Anupamaa, The Kapil Sharma Show and others in Ormax Most-Liked Hindi TV Shows Week 2 list 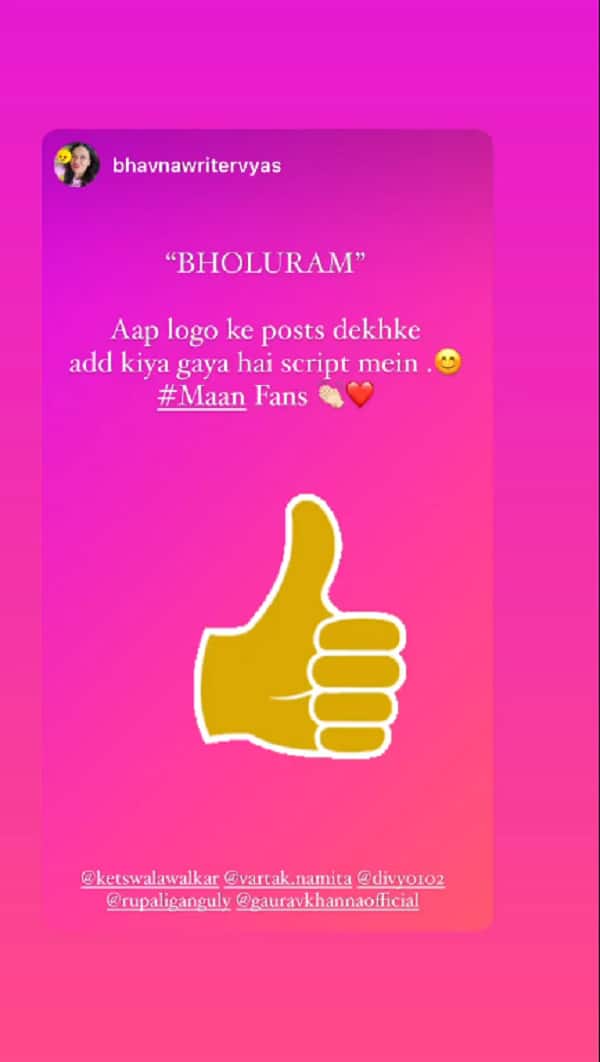 In the upcoming episode of Anupamaa, we will see Anuj Kapadia adjusting the pleats of Anupamaa's saree. And while doing so, he will pour his heart out. Anuj will reveal that his father would do the same for his mother. Anuj went on to add that even he will do it for her. He will leave Anupamaa blushing by saying that he will even skip the India-Pakistan match for her if she was Mukku's bhabhi. Anu leaves nervously and GK who heard everything will join and praise Anuj for being so vocal about his feelings. Anuj is flabbergasted as he thinks he was saying it all in his mind.

Later, GK confronts Anu on the same and she reveals that she has indeed fallen in love with Anuj. GK is super happy. However, Anupamaa stops him from revealing anything to Anuj right now as she wants Anuj to sort out his differences with Malvika aka Aneri Vajani first. When Anuj spots them, he asks Anu if everything is okay. It is then that Anu calls Anuj 'Bholuram'. Don't miss out on tonight's episode of Anupamaa for some adorable Maan moments.