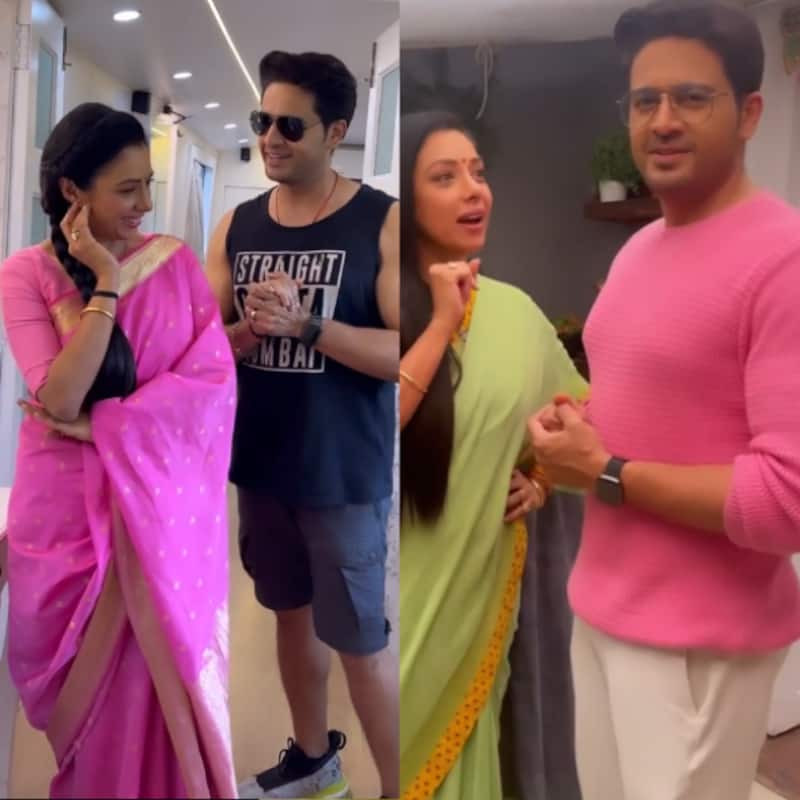 Fans in getting to watch Gaurav Khanna and Rupali Ganguly's wedding in Anupamaa. MaAn Ki Shaadi is one of the most-awaited moments in Anupamaa. Gaurav and Rupali's on-screen chemistry is widely appreciated by fans. They have a separate fan base too who ship MaAn on regular basis. Gaurav and Rupali shared an amazing bond off-screen. They keep pulling pranks on each other and shoot romantic reel videos as a treat for their fans. And now, Gaurav and Rupali have shared yet another funny video online. Also Read - Yeh Rishta Kya Kehlata Hai's Harshad Chopda gets candid about marriage plans; says, 'If I marry the way I fall in love then...'

It is basically Anuj aka Gaurav Khanna's revenge on Rupali Ganguly. The actress is seen in a pink saree. And Gaurav felt it right to take revenge for an old video gimmick pulled by Rupali aka Anupamaa. For the unversed, when Gaurav wore a pink tee on the sets for the scene, Rupali had teased him by singing Priyanka Chopra's song Pinky. This time, Gaurav teased her by singing the song and Rupali was left blushing and trying not to laugh. Also Read - BTS V aka Kim Taehyung proves he is a pop fashion icon in Paris - here is a look at his astro chart that hints at global superstardom

Gaurav Khanna captioned the post saying, "Badla.. payback .. bts .:Call it watever .. but the truth is that, We love doin all this for our lovely fans and our extended family ,that is -YOU…" Check out the goofy video here: Also Read - Avika Gor birthday special: Balika Vadhu fame actress has an outfit for EVERY occasion; gives MAJOR style inspiration [View Pics]

A couple of weeks ago, Gaurav Khanna had opened up about the mature romance being shown in Anupamaa between Anuj and Anu. Talking to India Forums, he said, "This is a part and parcel of an actor's life, the character and the story moves from one place to other in TV, and similarly, there have been ups and downs in the whole story forward since Anuj's entry, and personally speaking, I would say there is a lot of mature romance and very very different sort of romance on-screen. I have done a lot of romance on TV shows but the way we treat romance in this show is very different and something new and I feel that's what people like because it’s nothing what they've seen off late and not the run of the mill kind of romance."

He added, "It is mature and something you can sit and watch with the whole family and I feel that is the USP of the show that the story is very believable and at times, there are ups and downs because it is an entertaining show and there would be things which will be out of the box but the core of the story is very believable and that's what I think works for the show."