Bade Acche Lagte Hain 2 fans are adoring the chemistry of Nakuul Mehta and Disha Parmar. On the show, we saw that they are living separately as he is infected with the virus. He is locked in a hotel room. Priya Sood (Disha Parmar) worries endlessly for him. The couple talk via video chat. She also makes upma and sends for him. He is happy to get home-cooked food made by Priya. The couple also had a reunion where they met on the road. However, fans could not see the episode in the main episode. The romance quotient of the show is limited. Fans are annoyed that makers are cutting out Ram (Nakuul Mehta) and Priya (Disha Parmar) magical moments from the telecast. They took to social media to vent their frustration. Also Read - Mouni Roy-Suraj Nambiar wedding guest list: Ranbir Kapoor-Alia Bhatt NOT invited for the wedding; Ekta Kapoor to grace the event

A viewer wrote, "Bataiye humein ????? Kya bataye . Precap me jo dikhate hain vo sab bhi serial se cut kar dete hain. Where is that reunion scene of RAYA. Jo log dekhna chahte hain usko chod kar sab dikhayenge. We want to see first reaction of Ram and Priya after reunion." The comments section of Instagram is flooded with complaints from viewers. The TRPs of the show on TV are low. This kind of attitude will affect the viewership of the show. Also Read - Shehnaaz Gill, Nia Sharma, Nakuul Mehta — These 5 TV stars set Instagram on fire this week 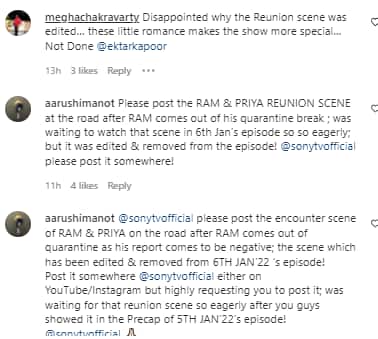 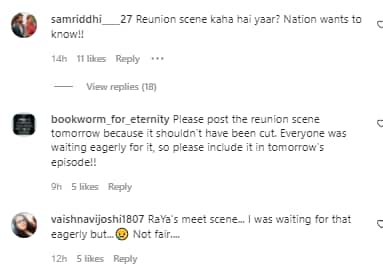 Also Read - Naagin 6: After Ieshaan Sehgaal, THIS actor is speculated to be the main lead of Ekta Kapoor's show

Bade Acche Lagte Hain 2 is a show from Ekta Kapoor's Balaji Telefilms. It is the second season of the superhit show that had Ram Kapoor and Sakshi Tanwar. Nakuul Mehta and Disha Parmar reunited for the show after Pyaar Ka Dard Hai Meetha Meetha Pyaara Pyaara. The jodi is adored by fans. However, there has been some concern about the low TRPs. Ekta Kapoor has done enough brainstorming on the show and told the writing team to rev up the proceedings. But romance is a key ingredient and should not be missed!