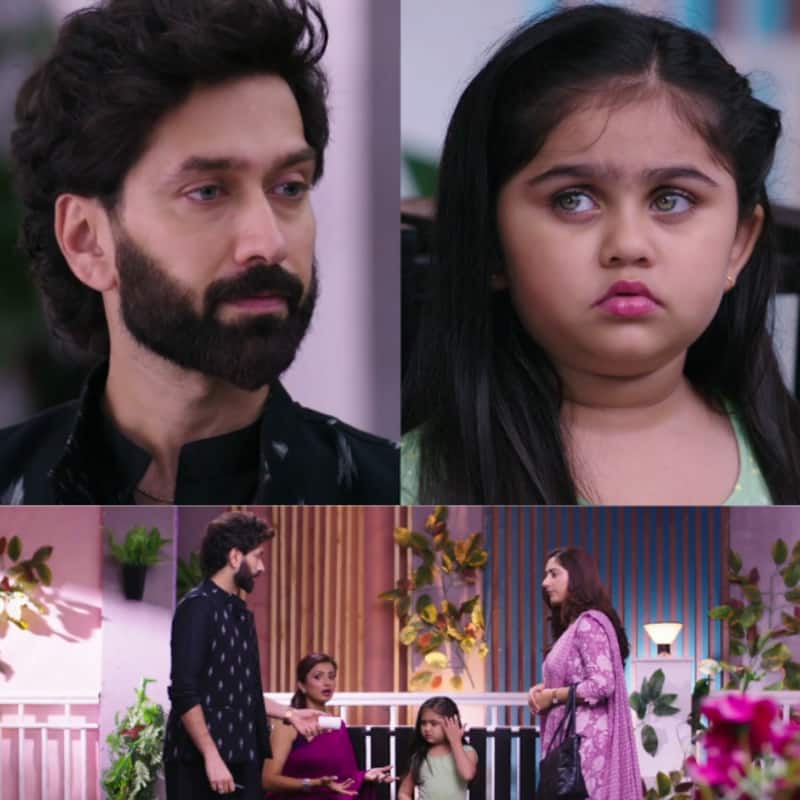 Nakuul Mehta and Disha Parmar starrer Bade Achhe Lagte Hain 2 took a leap recently. The lives of Ram and Priya have changed significantly, if not for the better. Ram and Priya parted ways on a sour note. It was Priya aka Disha Parmar who took the blame for Shivina's accidental death. She later lies to Ram aka Nakuul Mehta that she is pregnant with Krish aka Piyush Sahdev's child. After a leap of five years, Pihu is introduced who is Ram and Priya's daughter. Also Read - Trending TV News Today: Munawar Faruqui drops MAJOR hint about Bigg Boss 16, Bade Achhe Lagte Hain 2 undergoes budget cuts and more

Now, in the latest episodes of Bade Achhe Lagte Hain 2, we have seen Ram and Priya, and Ram and Pihu's interactions. Pihu is unaware that Ram is her father and is also skeptical about Ram as a person. Now, the channel dropped a sneak peek into the upcoming episodes of Bade Achhe Lagte Hain 2. In it, we will see Pihu doubting Priya that she is hiding something. Priya aka Disha Parmar is in fact going to Ram's place due to the deal. Pihu is worried about her mother and stresses out. She asks about her medicines and Ram aka Nakuul Mehta enters with a box of medicine. Pihu asks Priya to file a police complaint against him and calls him Khadoos. Ram is visibly hurt. Check out the promo here: Also Read - BTS of Anupamaa, Ghum Hai Kisikey Pyaar Meiin and more Top TV shows: check how the most crucial scenes are shot

Well, it's really not established as to why Pihu hates Ram so much. And hence, netizens find it to be forced. They want this forced-hate between Ram and Pihu to end soon. Moreover, Ram has a right to know that Pihu is his daughter. Netizens want Priya to reveal the truth about Pihu to Ram. The dialogues of Pihu, who is just a child have also been criticised by the fans. Check out the tweets here: Also Read - Ghum Hai Kisikey Pyaar Meiin, Anupamaa and more – Twists in TOP TV shows that will shake up TRP charts

BHAI, how has ram not found the fact suspicious that pihu takes so many medicines exactly like him, I mean he does know ki itni dawaiyan koi normally nhi leta?
It's just him and now his daughter, HOW IS HE NOT THINKING ABOUT THAT?!#BadeAchheLagteHain2

can someone brutally bring out priya's truth in front of pihu

Abhi Pihu not liking Ram seems to be a red flag which would come up in future..as she won't like them together.#BadeAchheLagteHain2

Just saw the sneak peak and I gotta say, Priya is THE only one that can sort out the differences between Pihu and Ram. Pri meri jaan please speak up already.#BadeAchheLagteHain2

Writers please reconcile Pihu and Ram before Ram and Priya

Give them a fresh start please #BadeAchheLagteHain2

Ram's behavior with Pihu is wrong from starting when he doesn't even know she's P's daughter and after they met everytime! However khadoos you are, have no right to behave rudely with a child! #BadeAchheLagteHain2

How can priya let pihu hate Ram. When he became like this because of Priya's betrayal only. So priya should feel remorse & tell some positive things about Ram. A daughter shouldn't hate her father like this?#BadeAchheLagteHain2

This forced hate between Ram and Pihu should END NOW!
Ram would be on a guilt trip once he knows about Pihu's identity#BadeAchheLagteHain2

You and me both! I hate this forced dislike between Pihu and Ram. It was so so so forced and unnecessary #BadeAchheLagteHain2

How can priya let pihu hate Ram. When he became like this because of Priya's betrayal only. So priya should feel remorse & tell some positive things about Ram. A daughter shouldn't hate her father like this?#BadeAchheLagteHain2

Pihu is too rude ! Please tone down her dialogues. #BadeAchheLagteHain2

In the upcoming episodes of Bade Achhe Lagte Hain 2, we will see a Jagran taking place at the Kapoor mansion. Ram, Priya, Nandini and even the rest of the Soods and Kapoors will all be decked up for the same. Ram's clients will also be a part of the Jagran, as per the reports.