Bigg Boss 15: Aditya Narayan clarifies that he's not a part of Salman Khan's reality show; says, 'Would love to host it one day'

Bigg Boss 15: Aditya Narayan dispels rumours of being a contestant on Salman Khan's reality show and says he did only host it if given the chance

Every year, the names of some contestants start floating around as Bigg Boss contestants. This time, Bigg Boss 15 is going to be different. We will first see the OTT version on Voot where a number of common man contestants will battle it out. After elimination and public selection, some chosen ones will enter the main house. The celeb guests will enter on a later date. One of the names that is doing the rounds is that of Aditya Narayan. He has been hosting Indian Idol 12 for almost 12 months now. The singer-host got a whiff of the rumours when someone asked him on Instagram if it was indeed true. Also Read - TRP Report Week 37: Anupamaa-Anuj's chemistry gets record-breaking numbers, Bade Acche Lagte Hain 2 fails to impress

Aditya Narayan wrote on his Insta stories, "Contrary to speculation, I am not going to be a contestant on the upcoming season of #BigBoss or any season for that matter. Always happy to guest feature. Would even love to host it someday. But I have neither the time nor the inclination to participate. Best wishes to @colorstv @endemolshineind & the entire team for putting up a great show every year & I am sure this year will also be just as great." Also Read - Indian Idol 12's Sayli Kamble CONFESSES she is in love; shares lovey-dovey picture with boyfriend 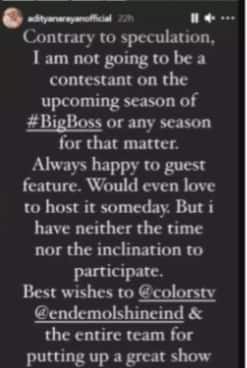 The singer-host in a long interview to a daily has said that he intends to take a break from hosting. Aditya Narayan said that he wants to pursue some of his other passions in life. He also stated that he was very thankful to TV as it had given him a stable career and a secure life. He told a newspaper, "I was a teenager when I started hosting on the small screen, and by the time I am done next year, I will probably be a father (smiles). The TV industry has given me a lot — name, fame, and success."