After two months of relentless efforts from fans of late Sushant Singh Rajput, the Supreme Court announced that the CBI will take over the case. The family was little worried at the delay. However, the top court did not waste any time and gave its verdict in five minutes flat. It did not take notice of the argument that the FIR was filed outside the jurisdiction of the crime scene. The judge said that the Maharashtra Government had just done an inquest in the case and no closure was given even after 60 days. The last few days have been tough on the family. Shweta Singh Kirti, who is slightly older to the late actor thanked everyone for the global movement for justice. Also Read - Mouni Roy quoting Moulin Rouge while posing in a sparkling saree is all things GLAM — view pics

Sushant Singh Rajput's death happened on June 14, 2020 at his Bandra residence. He had shifted some months back to the Mont Blanc Apartments near Jogger's Park. He was found hanging at his residence. It was revealed that he had been suffering from clinical depression since a few months. However, people close to the actor over the years said that he never displayed signs of depression or any serious mental illness. Just after his death, Kangana Ranaut slammed the movie mafia for his emotional and psychological lynching over the years. Also Read - From Arjun Bijlani to Pawandeep Rajan: The whopping amounts reality show winners take home will blow your mind

Justice is the truth in action ??
Truth wins .... #1ststeptossrjustice pic.twitter.com/2CKgoWCYIL

This is the best news finally #CBIforShushant , a big thank you to @republic for not giving up and making it reach to every single ear.

Great news for all #warriors4ssr ..
Supreme Court has given permission to CBI to solve @itsSSR death case .... May we get the justice, May we find the culprits behind his death soon .#cbiforssr #warriors4ssr #justiceforsushantsinghrajput pic.twitter.com/3SMWzOjoZb 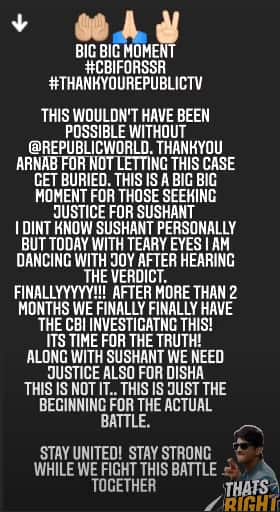 A statement has come from the family of the late actor. They have thanked everyone for the support in this quest for justice. The family also thanked Bihar CM Nitish Kumar for all the assistance in the family. On July 27, an FIR was filed by KK Singh, the father of the late actor at Patna's Rajendra Nagar Police Station.