This Monday on December 7th, Divya Bhatnagar breathed her last. The Yeh Rishta Kya Kehlata Hai actress had been battling COVID-19 for some time now and had her mother and brother with her. But what's shocking is the fact that the actress was mentally and physically abused by her husband, Gagan Gabru. Divya Bhatnagar's mother had accused Gagan Gabru of being a fraud back when she was in the hospital. The latter had denied all her claims. However, Devoleena Bhattacharjee stood by Divya's family and vowed to expose Gagan Gabru. She had been sharing pics and videos revealing details of Divya Bhatnagar's ordeal since her marriage with Gabru last year. Also Read - Trending TV News today: Pearl V Puri rape case, Devoleena Bhattacharjee on her life-partner, Rohit Shetty's 7 years journey on Khatron Ke Khiladi and more

She has now shared a series of chats on her Instagram handle in the stories section and also shared an audio recording of Divya Bhatnagar who gave a first-hand account of her relationship with Gagan Gabru. In the audio recording that Devoleena Bhattacharjee shared on her Instagram handle, we can hear Divya Bhatnagar revealing that she put up with him for a long time and prayed and hoped he would change. However, when Gagan Gabru started threatening her family members is when he walked out. The actress could be heard saying that he beat her up with belts and shoes and that this all happened during the lockdown as well. Also Read - Late Divya Bhatnagar's husband, Gagan Gabru extends support to Pearl V Puri And Karan Mehra; says, 'Stop misuse of laws against men'

Divya also revealed that they did not have a physical relationship with Gagan Gabru. The late actress completely broke down while talking to her friends saying that he knew that she wanted to settle down and start a family, but he kept her devoid of any intimacy. Devoleena Bhattacharjee tagged Mumbai police. She captioned the post saying, "And we still wait for the crime to happen..and log bas tamaashe dekhne baithe rehte hai...that criminal is roaming wherever he feels like and asking to support him..how shameless and insensitive one can be... This criminal should be behind the bars as," she said while slamming some of Divya's fake wellwishers and friends for keeping mum about this. "Divya's many so-called well-wishers and friends..kahan ho bhai tum log...Rehne ko jagah nahi toh divya ka ghar,khaana divya ka,sab divya ka...Aaj saanp sungh gaya tum sabko...Selfish & worthless people you are..crocodile tears barsa k gufa mein chup gaye sab..." the actress had added. Check out the audio recording below: Also Read - Before Karan Mehra's wife Nisha Rawal, Karisma Kapoor, Shweta Tiwari and THESE 5 other celebs faced domestic violence

Here's Nidhi Uttam's chat with Divya Bhatnagar that Devoleea shared on her wall: 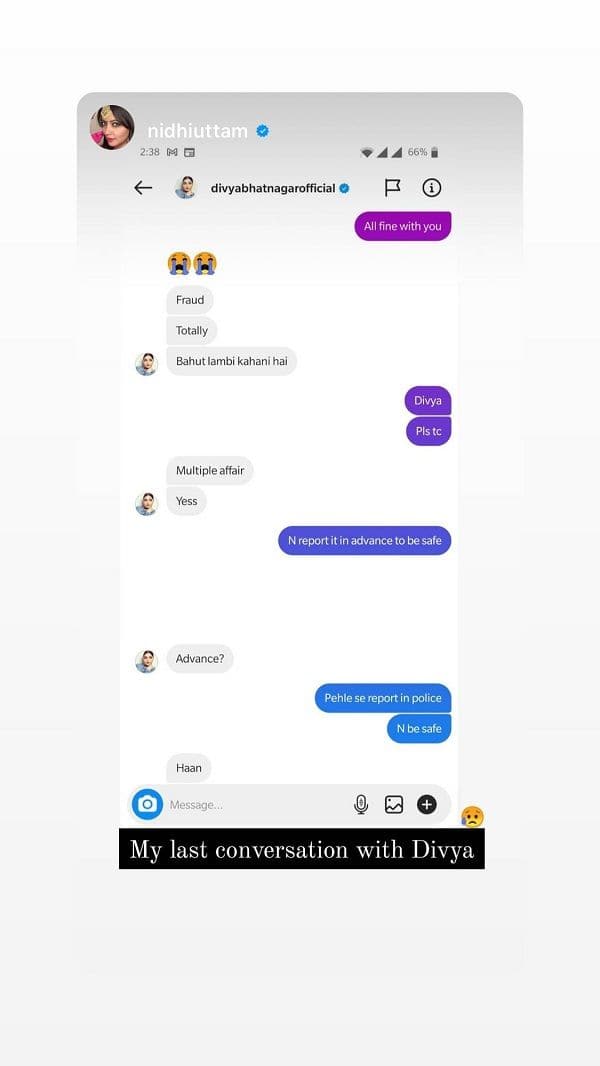 Here's a snapshot of Divya's bruises that Nidhi Uttam shared on social media: 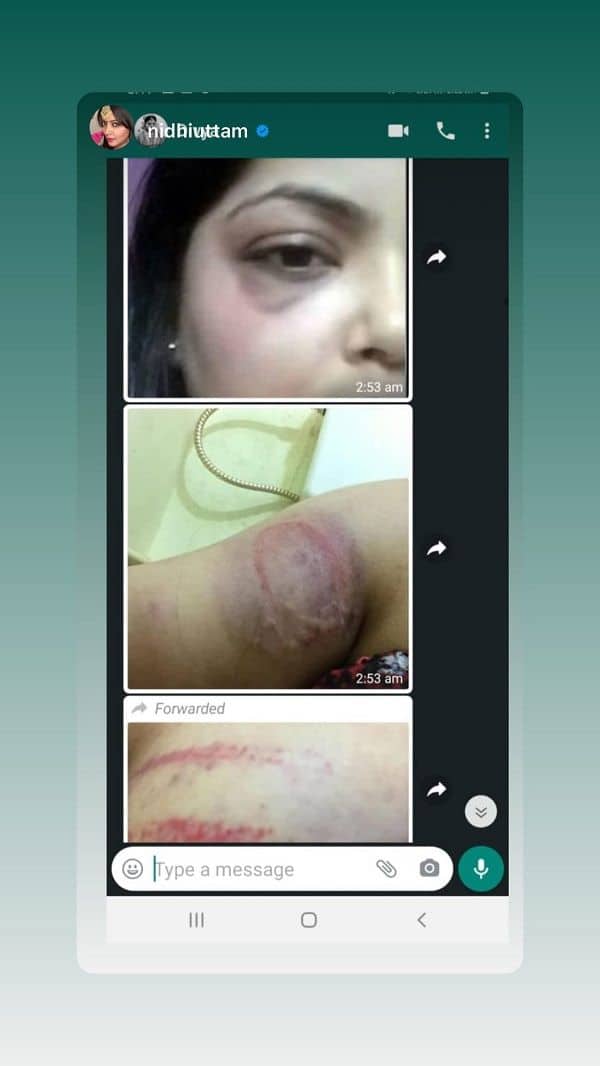 Here are the leaked chats of Gagan Gabru and some more proofs against him: 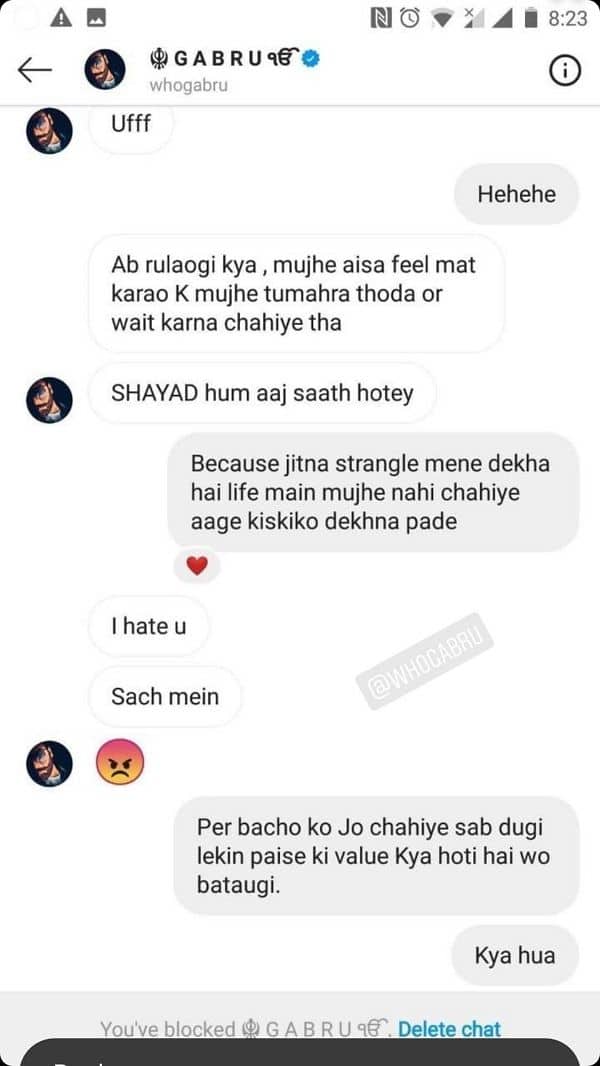 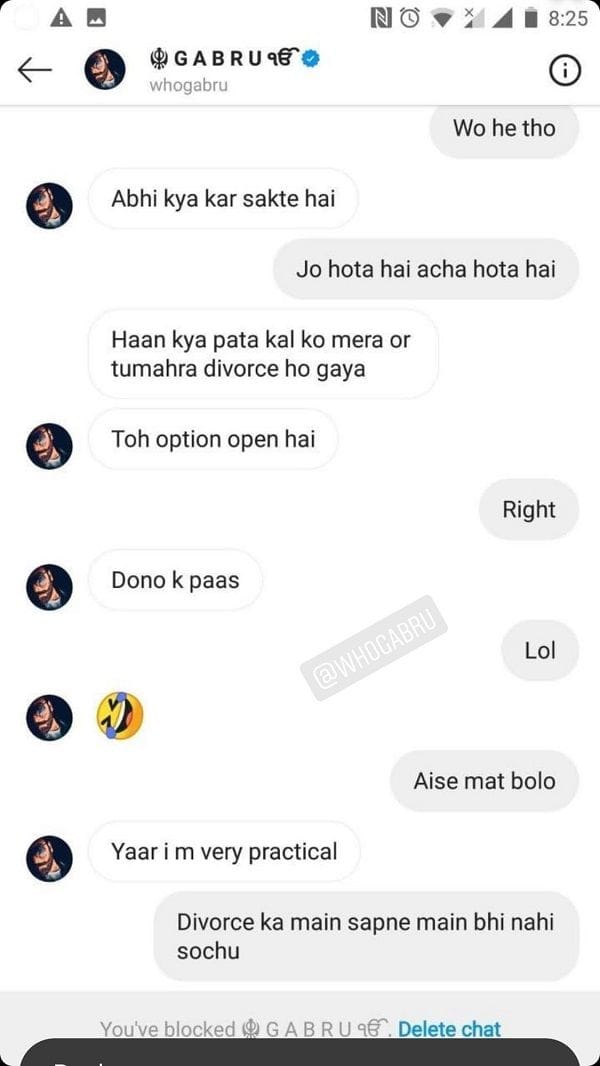 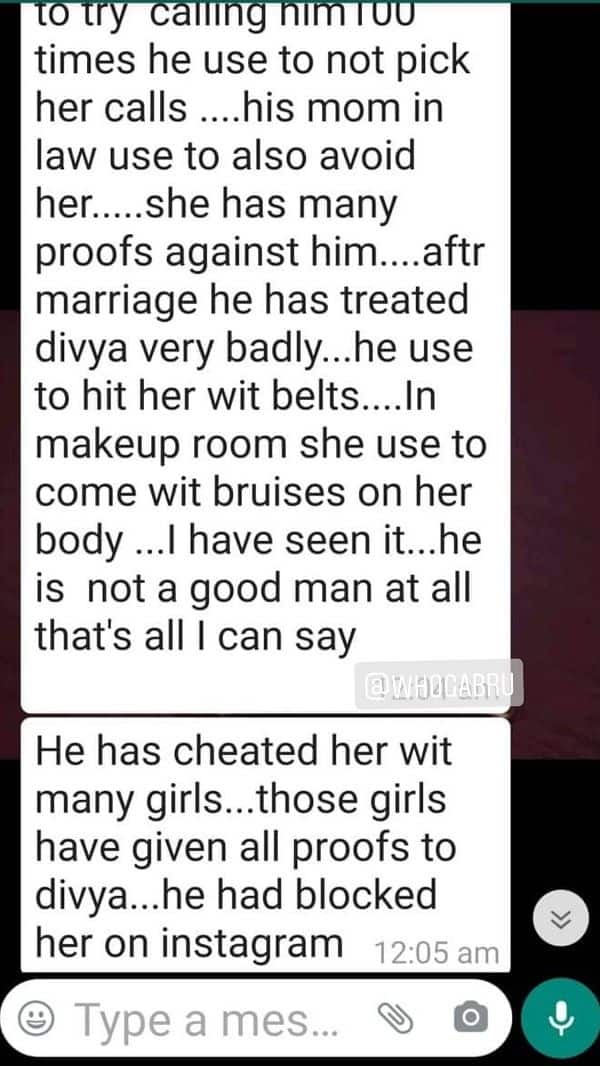 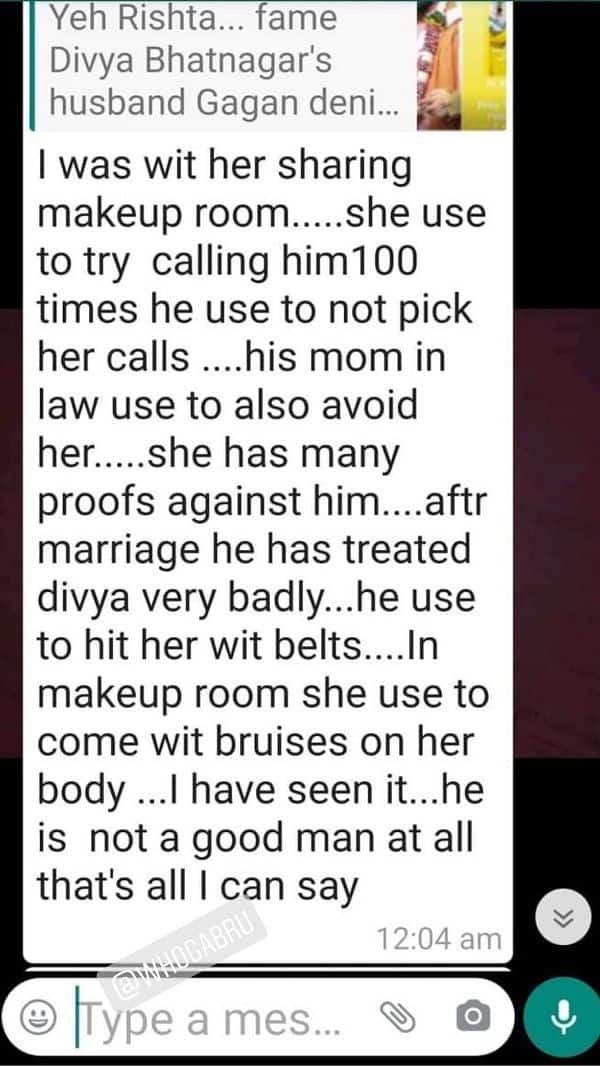 Here's Divya's chat in which she revealed learning about Gagan's affair: 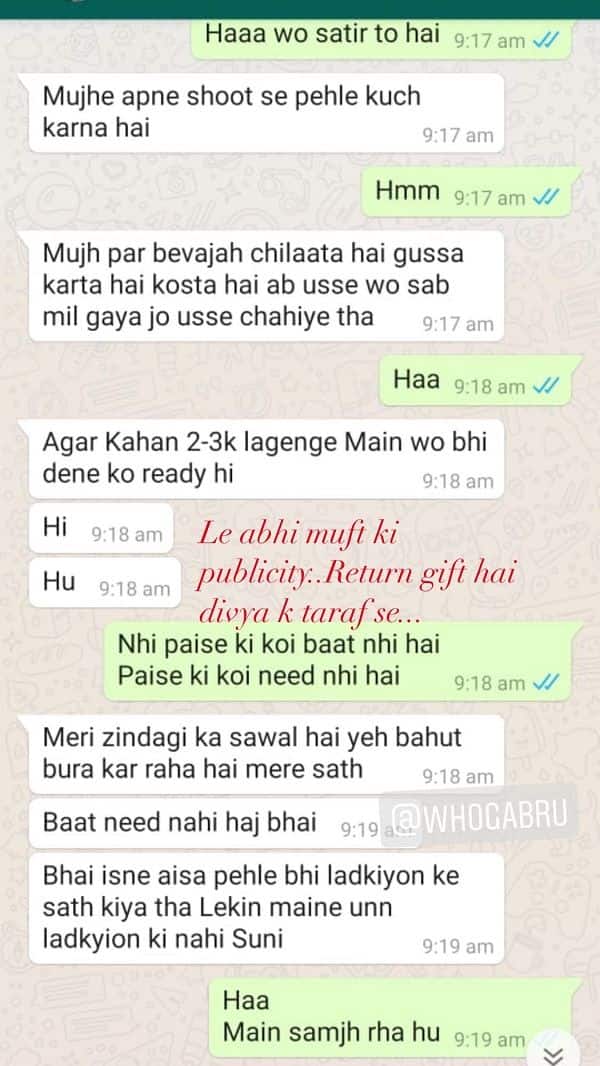 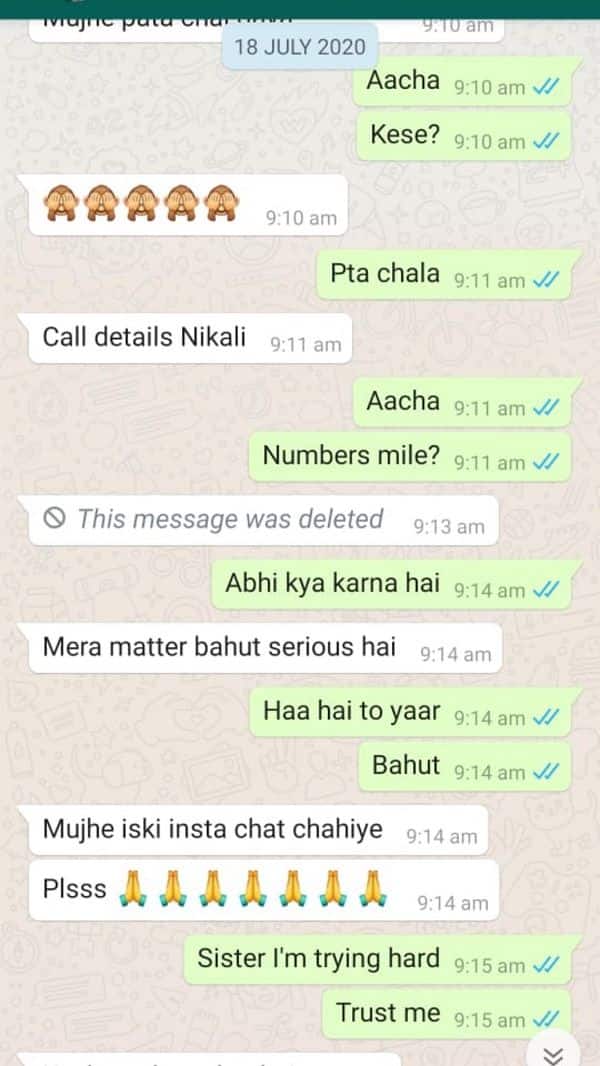 Devoleena Bhattacharjee further requested people to not use the videos for their monetary benefits: 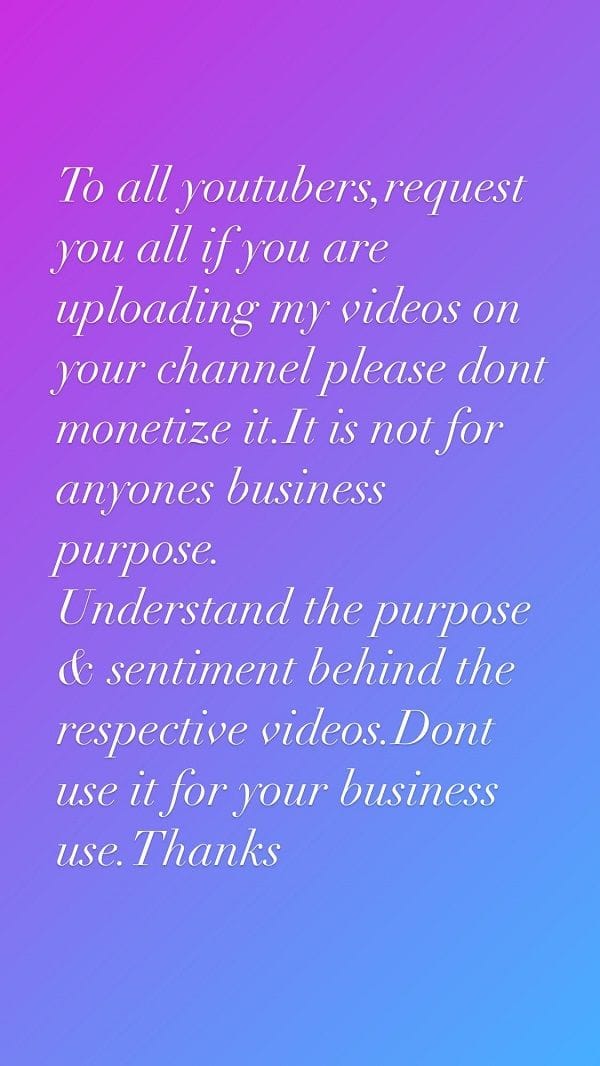