Divyanka Tripathi Dahiya came across a sensitive fan who felt that the Yeh Hai Mohabbatein actress' usage of the term 'Indian Mosquitoes' was derogatory. The actress schooled the fan on mosquitoes. Check it out here:

Divyanka Tripathi is the most talented and beautiful actress we have in the entertainment industry. Divyanka is sweet and kind too but she sure knows how to give it back to the trolls or fans who get too 'serious' over something. Now, it so happened that Divyanka posted a couple of pictures on her gram and talked about how mosquitoes didn't let her sleep. She had captioned it thus: "Famous Indian Mosquitoes were my alarm clock today. Hope you all had a better night?! #GoodMorning." It seems one fan didn't like the way Divyanka called the mosquitoes 'Indian mosquitoes.' And the fan commented on her post asking her to not use such terms as it seems derogatory. The Yeh Hai Mohabbatein actress schooled the fan on 'mosquitoes'. Also Read - Bigg Boss 15: Rhea Chakraborty, Surbhi Chandna and 8 more celebs who refused to do be part of Salman Khan's show – view pics

The fan deleted the comment. However, it went like this: "Using the term Indian Mosquitoes sounds very derogatory to the country. I am a big fan of yours but don't appreciate the coined term." Divyanka replied to his comment saying that she is in India and so are the mosquitoes. The actress made it funny saying that she is famous and so can these mosquitoes be. "Why this bias between humans and insects? Tch Tch! (Above caption was meant to be funny),' she said. But on a serious note Divyanka asked the fan to be mature and real and not be uber-sensitive towards everything. She also gave a reality check to the fan saying that there are open sewers in the country where mosquitoes breed. Also Read - Vishal Aditya Singh Birthday: From his tumultuous with Madhurima Tuli to link-up with Sana Makbul - 5 times his personal life grabbed headlines 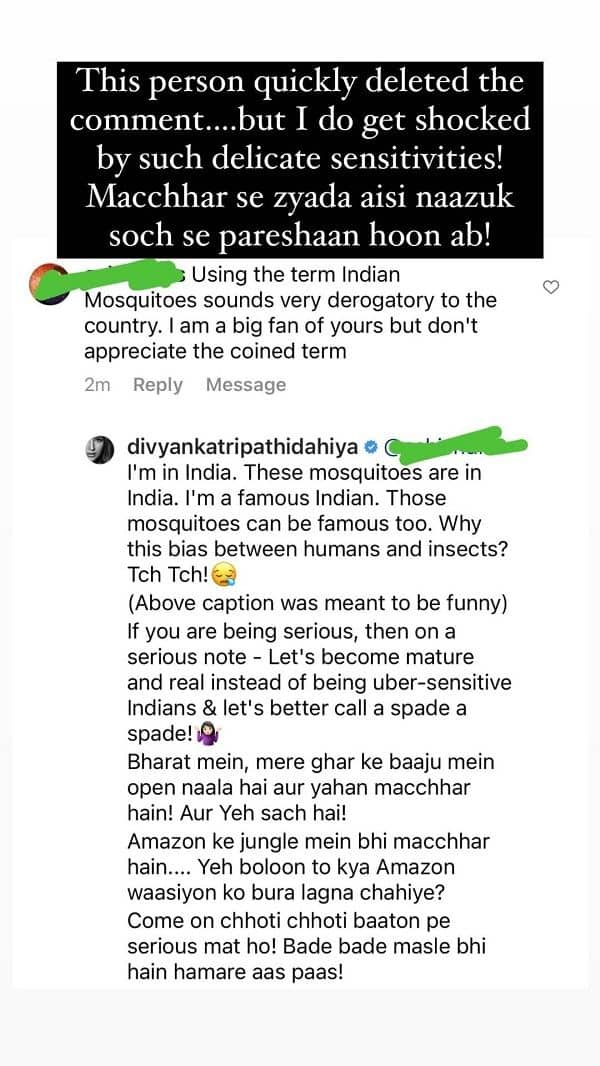 On the work front, Divyanka was recently seen in a heart-warming video Babul Da Vehda. The song is sung by Asees Kaur. It was well-received.