Yesterday, Ira Khan took to her social media handle and shared her fourth 'self-care' post in which she revealed that her mother, Reena Dutta, had handed her a book on sexual education after she hit puberty.

Aamir Khan's daughter, Ira Khan, is celebrating the international self-care day for about a week now. The filmmaking enthusiast has been sharing posts on self-care every day on her Instagram stories. Ira has vowed to take care of herself and find things throughout the week that can help her in doing so. She has urged everyone to take a part in this campaign and promote self-care. Yesterday, Ira Khan took to her social media handle and shared her fourth post in which she revealed that her mother, Reena Dutta, had handed her a book on sexual education after she hit puberty. But Ira did not pay attention to it. Also Read - Kareena Kapoor Khan gives a glimpse of her 'special' birthday celebrations and the promise she has made to herself

The fourth post by Ira Khan was titled, "Be Curious." She added, "I don't think I've ever looked at myself entirely before. My mom gave me a sexual education book when I hit puberty and it had asked me to look at myself in a mirror, but I didn't get around to doing it. My body has also changed so much in general. Have a long way to go." For those not in the know, Ira Khan is running this campaign called "Pinky promise to me," in which, she lists down things to do to take care of oneself. Check out Ira's latest Instagram post here: Also Read - When Samantha Ruth Prabhu called Naga Chaitanya 'completely husband material' and confessed he fell in love with the actress despite seeing her make ‘horrible mistakes’ 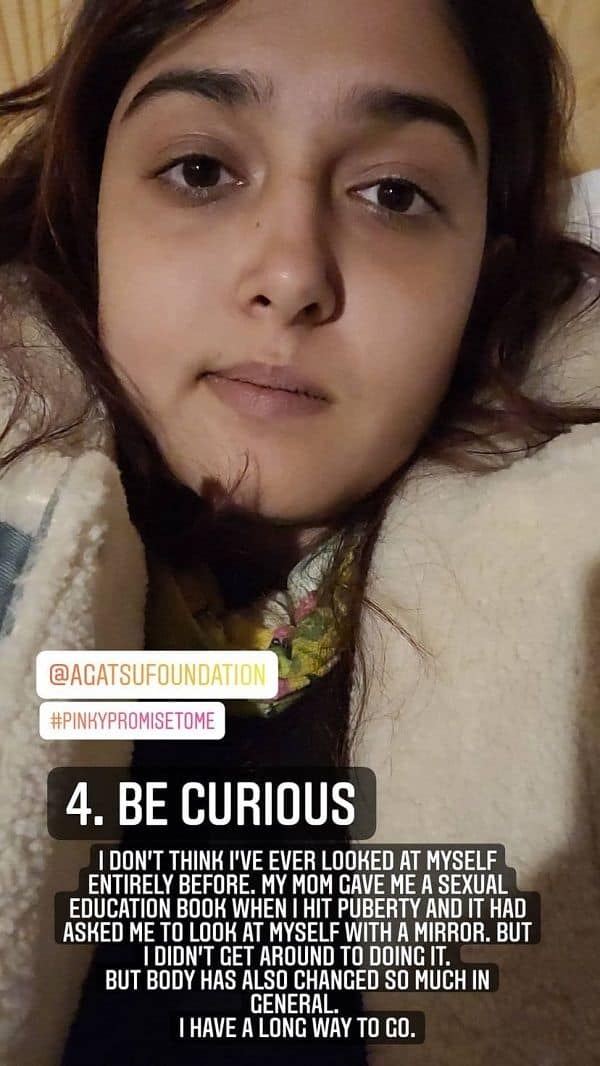 Earlier this week, Ira Khan had shared a picture with her mother as they were travelling in a car. She captioned the post saying, "I also talked to my mom about how I felt. And things that I usually have to type out because I cry too much to have these conversations in person."

On her birthday, Ira Khan established a foundation called Agatsu which focuses on the promotion of mental health and well-being. While talking about it, she had said, "Agastu is my attempt, it's my way of trying to find a balance, of trying to attain equilibrium to make my life better for me, to facilitate you in making your life better for you, whatever that means for you".