Gauahar Khan lost her father on 5th March 2021. He was suffering from an age-related ailment and succumbed to the same. Gauahar Khan is been mourning his demise. She recently lashed out at a portal for spread fake news.

Gauahar Khan's father, Zafar Ahmed Khan passed away on 5 March. He was ailing and was hospitalised for the same. Gauahar Khan and Zaid Darbar had been looking after the former's ailing father in the hospital. These are tough times for the family. Gauahar has been keeping unwell too. Naturally, she is shocked by her father's demise whom she adored to bits. However, the Begum Jaan actress is a strong woman. She won't give the silent treatment to those who give out false news. Recently, Gauahar lashed out at a news portal that had covered a story saying that the actress and her husband, Zaid Darbar are pregnant with their first child. Not only that but they also spoke about their age difference for which Gauahar slammed them saying it was untrue. Retweeting the article, Gauahar Khan tweeted out saying, "Tumhara dimaag kharaab hai! Aur facts bhi. 12 saal chote waali galat news hui purani (You have lost your mind and your facts are wrong too. The false news of a 12-year age difference is old), so get ur facts right b4 typing! I’ve just lost my dad so have some sensitivity towards ur baseless reports. @AsianetNewsHN. I am not pregnant, thank you very much!" Have a dekko at Gauahar's tweet below: 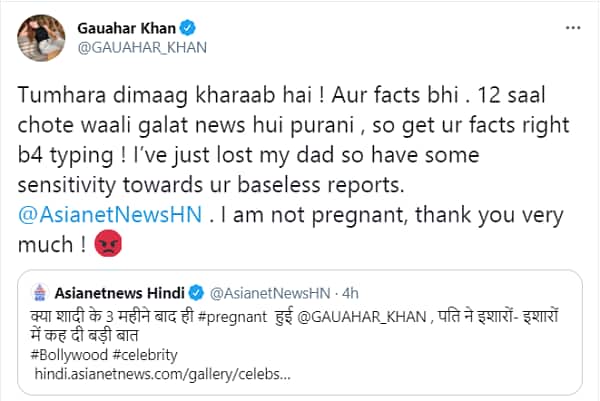 Meanwhile, recently bereaved Gauahar has been sharing pictures with her father in emotional posts. On the occasion of Women's Day on 8th March, Gauahar Khan had shared a picture from her Haldi ceremony which also featured her father and Zaid. She gave them a tribute saying, "The two men in my life, who made me a strong woman in different ways. My Pappa, who is my inspiration in the way I talk, in the way I think, in who I became. And MY Zaid, who accepted me with my strength, fire n flaws n became my strongest support of life and it’s tidal waves. I love you both so much! Pappa, I miss you!"

Our prayers for Gauahar's father. May his soul rest in peace.