Khatron Ke Khiladi 11 premiere: From Shweta Tiwari kissing a chameleon to Divyanka Tripathi taking blessing from a giant lizard – here's all that went down 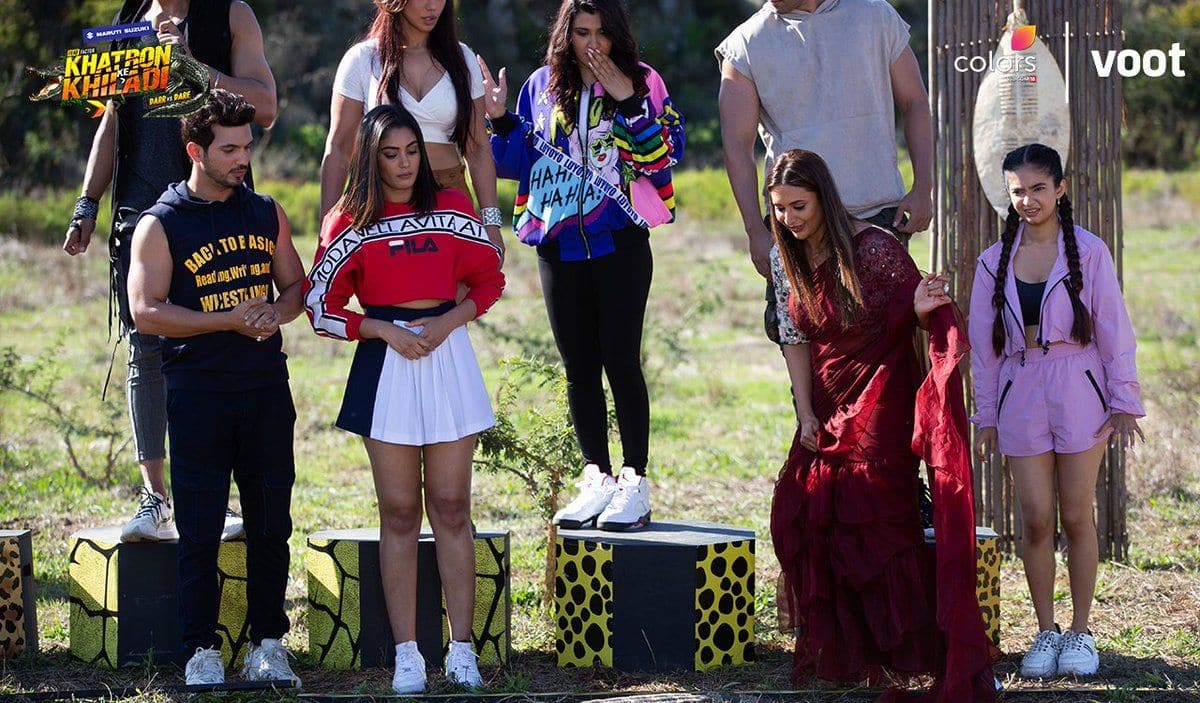 Being the designated bahu on Khatron Ke Khiladi, host Rohit Shetty asked Divyanka Tripathi to take blessings from someone or rather something and cross the threshold like she does in her daily soaps, with the only twist being that the something being a giant lizard, which she finally does after much hesitation on her part and persuasion on the part of the other contestants. Also Read - Khatron Ke Khiladi 11: Divyanka Tripathi Dahiya's terrific show in the first episode leaves fans screaming, 'Just Wow' — read tweets

Nikki Tamboli meets her phobia of butterflies head on 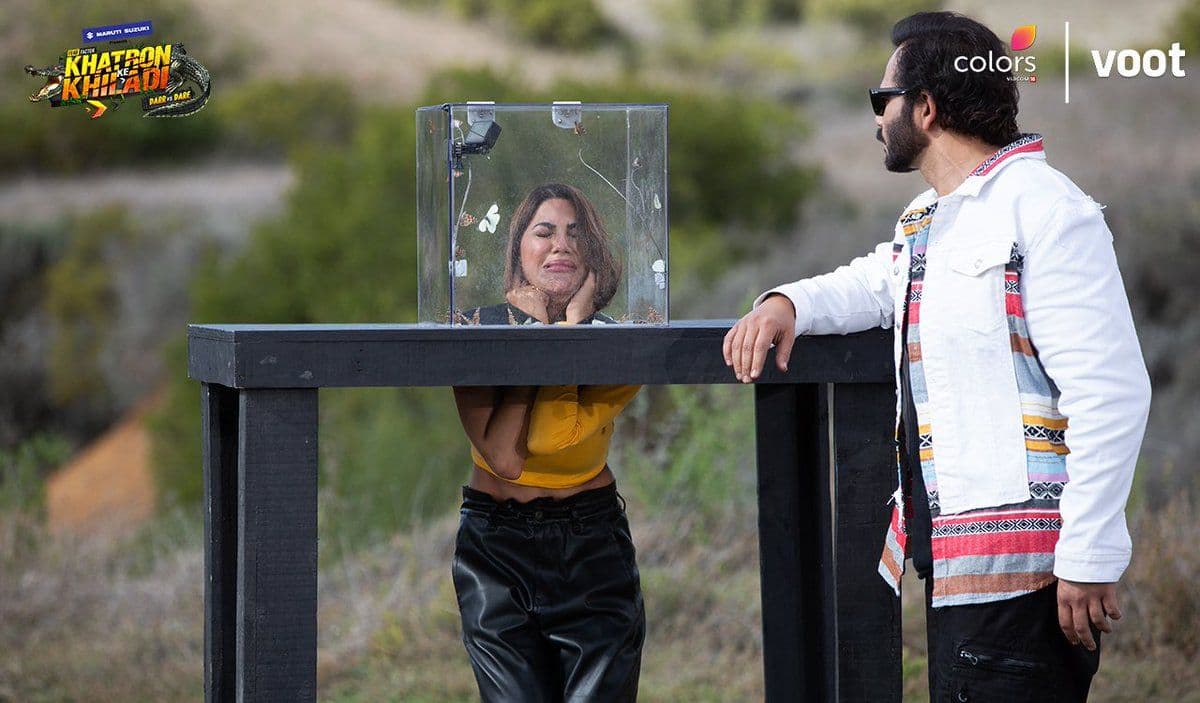 Of all the phobias someone could have, Nikki Tamboli's fear of butterflies has got to be the most uncommon if not the most unheard of phobia. To help her embrace it, Rohit Shetty literally makes the ex-Bigg Boss 14 contestant place her head in a glass case full of the little, beautiful insect.

Since he's known for playing historical characters, Sourabh Raaj Jain makes his entry as Kisna with the music from the Subhash Ghai movie et al, accompanied by two gorgeous apsaras. 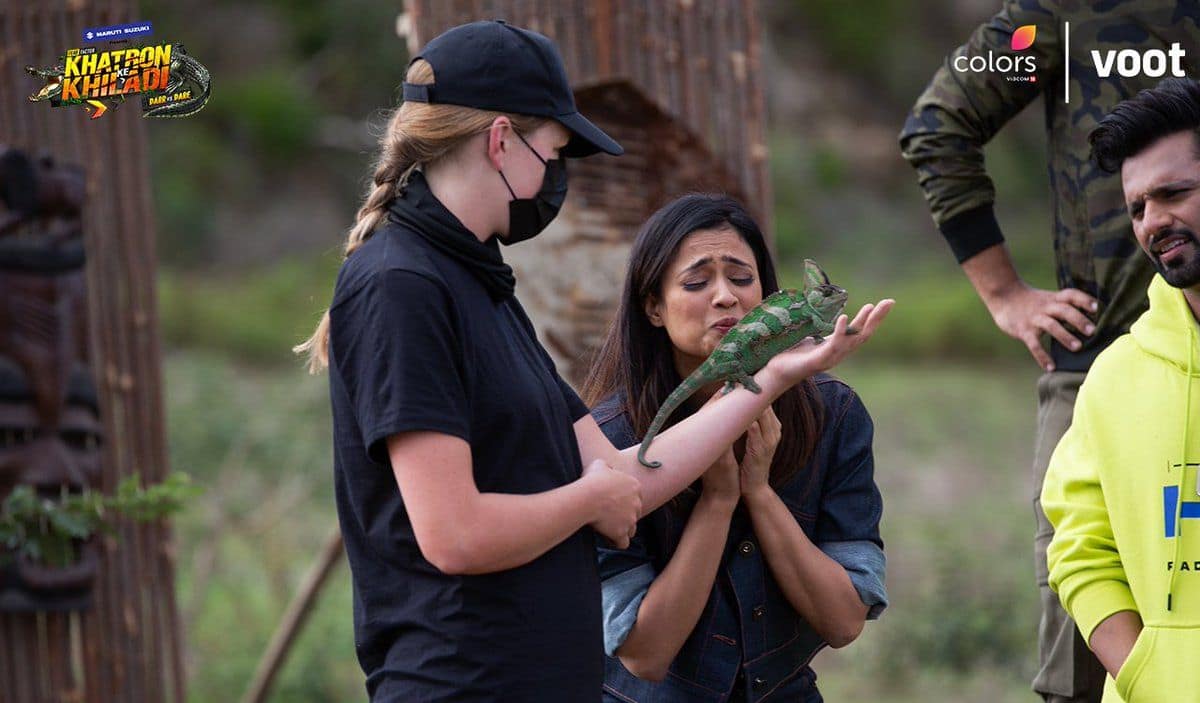 After daughter Palak Tiwari admits on camera that her mother is afraid of both cockroaches and lizards along with having a litany of other phobias, Rohit makes Shweta Tiwari kiss a chameleon, which she does after much trepidation.

Since Anushka is scared of spiders, she's made to hold a tarantula in the palm of her hand, followed by singing a romantic song time it.

The first stunt – 'The Cheetah' stunt

Shweta Tiwari, Anushka Sen and Arjun Bijlani were chosen for the first stunt, where they had to (one at a time) enter a cage containing two cheetahs, retrieve a flag, exit the cage and traverse a series of obstacles before crossing running toward the finishing line while a third cheetah tries to beat them to it. As Anushka finishes the task in the maximum time, she's saddled with the unwanted distinction of being the first contestant of KKK11 to relieve the fear band.

Varun Sood vs Rahul Vaidya on the buzzer

Varun Sood and Rahul Vaidya compete with each other to prove who knows Rohit Shetty movies better, by attempting to press the buzzer first on the questions posed by the host, with each wrong answer and non-answer resulting in a charge of current being passed through the body. 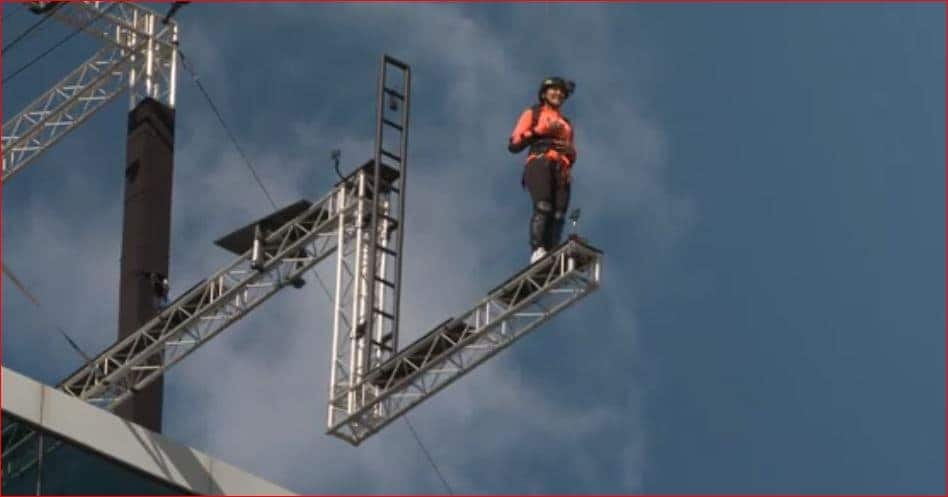 It was then time for the next stunt of the show, which entailed a participant braving multiple platforms projecting outward from the terrace of a multi-storey building, maintaining their balance against gusts of huge winds and excessively vibrating platforms without crawling or holding onto their harness as they attempt to press the buzzer with one of their feet. Aastha Gill, Rahul Vaidya and Abhinav Shukla are chosen to compete in this one, with Rahul being the next to receive the fear band since he lost his balance and fell off just before stepping on the buzzer.

The third stunt – 'The Song and Hyena' stunt 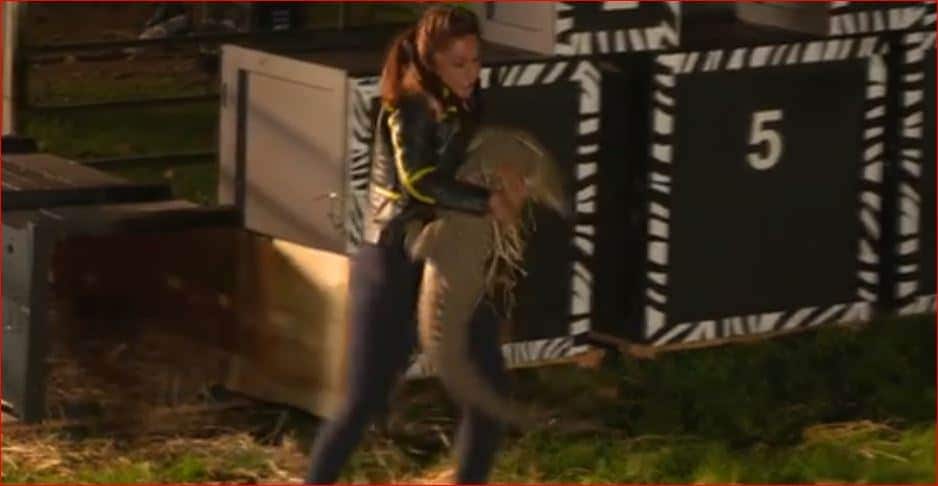 Participants in this stunt had to guess two songs based on images, after which they were given boxes to unlock, containing animals ranging from porcupines and pythons to iguanas, baby komodo dragons and adolescent crocodiles, which they had to place in cages on the other side of the field. Failure to do so, would result in penalty points. After both rounds, the three chosen contestants for this stunt, Nikki Tamboli, Sourabh Raaj Jain and Divyanka Tripathi, then had to enter a cage with a snarrling hyena and retrieve a flag. Nikki's time to complete this task was the maximum, which meant she joined ANushak Sen and Rahul Vaidya as the third member with the fear band on the season premiere of Khatron Ke Khiladi 11.