While Sidharth Shukla's demise has left everyone in shock, the coverage of his death was also under the scanner. Many are of the opinion that the loved ones of the one who has passed away should be left alone.

It is still hard to believe that Sidharth Shukla is no more. He passed away on September 2. His death has resulted in a void that can’t be filled. The actor was just 40. While the actor’s demise left everyone in shock, the coverage of his death was also under the scanner. Many are of the opinion that the loved ones of the one who has passed away should be left alone. Fans feel that they should not be shown in their most vulnerable and private moments. This made us ask you all about what you feel on the topic of his funeral. A whopping 92% of the people who voted have said that Sidharth’s grieving family and Shehnaaz Gill weren't respected by paparazzi while covering actor's death. Shehnaaz Gill was filmed when she was in tears and very vulnerable. Have a look at the results below: Also Read - A look into the ultra luxurious vanity vans of Shah Rukh Khan, Alia Bhatt and others will make your head spin – view pics 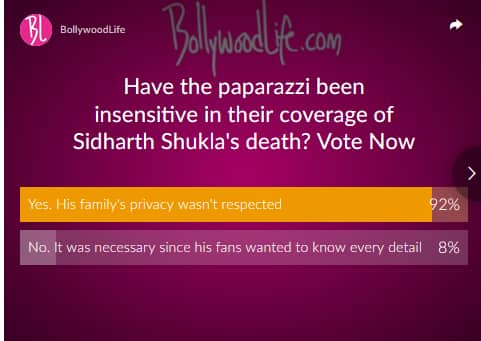 Earlier, comedian and actor Zakir Khan had slammed the media coverage at Sidharth Shukla’s funeral. Sharing a post on social Instagram, he wrote how someone’s death was turned into a ‘tamasha’. A part of the translated version of his post read, "They don't think of you as a human being. Not because there aren't any lines or boundaries. Your corpse is not a body without soul, but an opportunity to click pictures. As many as they can click. It's similar to how people try to steal crockery from houses burning in a riot. Because after that, what use will you be? At most, 10 pictures, five news pieces, three videos, two stories, one post. That's it." His post was also shared by Anushka Sharma. Also Read - Deepika Padukone, Kangana Ranaut, Alia Bhatt and more: TOP 10 Bollywood actresses with the most number of hits

Kriti Sanon also echoed the same feelings as she took to Instagram and wrote, “Breaks my heart to see our media, photographers and even online portals being so insensitive. Shameful! This isn’t “News”, nor is it “Entertainment”! Draw some boundaries! Have a conscience! Said it before, Saying it again! STOP covering funerals!”