Yeh Rishta Kya Kehlata Hai: Kartik and Sirat's fans are happy that Karan Kundrra's track has come to an end! View poll result to know why

We had conducted a poll asking your thoughts on Ranveer aka Karan Kundra's death track in Shivangi Joshi and Mohsin Khan starrer Yeh Rishta Kya Kehlata Hai. And today, we are declaring the results of the same.

Shivangi Joshi and Mohsin Khan starrer Yeh Rishta Kya Kehlata Hai has a massive fanbase amongst the Indian audience. Recently, Karan Kundrra, who played Sirat's husband, bid adieu to the show as his character's journey came to an end. The Kitani Mohabbat Hai actor had entered Rajan Shahi's Yeh Rishta Kya Kehlata Hai a couple of months ago. He brought a twist to Sirat and Kartik's story and was introduced as Sirat's ex-lover. Kartik had then reunited the two former lovers. But Sirat had started falling for Kartik. Despite her feelings, she got married to Ranveer. However, there was an intimation already that Karan's role would be a short one. Recently, in Yeh Rishta Kya Kehlata Hai, it was shown that Ranveer passed away due to lead poisoning. And we had conducted a poll on the same, asking your thoughts on the character's death track. Today, we are declaring the results of the poll. Also Read - Jannat Zubair's modern day bridal avatar will set your hearts on fire – view pics

A majority of voters thought that Ranveer's death was good riddance. Fans are happy that they can now focus on Sirat and Kartik's love story. About 46% of the audience felt that it was high time they introduced the track of Sirat and Kartik's love story. Also Read - Bigg Boss OTT WINNER Divya Agarwal celebrates her victory with beau Varun Sood and 'bhai' Rannvijay Singha – watch videos

Yeh Rishta Kya Kehlata Hai is going on for a long time. It has been on air since 2009. And some fans feel that the show has lost all its charm. About 37% of the audience voted for the same. And last but not least, about 17 per cent of the audience felt that the track was absolute nonsense. Check out the poll result below: Also Read - 'Ghar basa le,' Aastha Chaudhary recalls how Sidharth Shukla reacted on learning about her roka in a conversation days before his demise 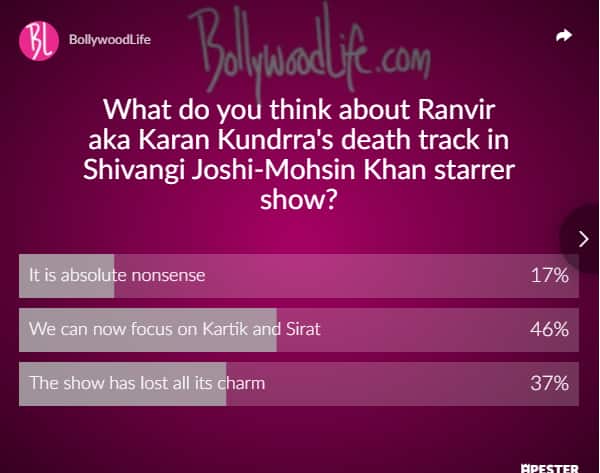 On a side note, tell us how you liked the twist in last night's episode of Yeh Rishta Kya Kehlata Hai by tweeting @bollywood_life.