Mohsin Khan has shared some new pictures with Jasmin Bhasin from the sets of their MV. And they that will make you, move over Kaira aka Kartik and Naira.

It was just last month that Mohsin Khan left Yeh Rishta Kya Kehlata Hai. Fans were devastated when Karafter Kartik, Sirat aka Shivangi Joshi left Yeh Rishta Kya Kehlata Hai too. However, the two are already busy with other professional commitments. Mohsin Khan is busy shooting for a music video with Bigg Boss 14 contestant Jasmin Bhasin. And the pictures from the same had been going viral. And now, Mohsin has shared some new pictures from the sets, some selfies that will make you move over Kaira aka Kartik and Naira. Yes, we know you love Kaira a lot. And Kaira will always remain, but look at these cuties here, their amazing bond can already be seen in the pictures. Also Read - Nikki Tamboli's note for her late brother Jatin on his birthday will leave you with a lump in the throat

In the pictures, we see Jasmin Bhasin wearing a chooda that a Punjabi bride is seen with. They posed for some pics and some selfies, their smiles in the pictures will leave you impatient for their music video. The two are dressed in casuals. Mohsin was all praise for Jasmin. He captioned the post saying, "Shes such a natural performer… beautiful punjaban…With d sweetest most hardworking @jasminbhasin2806 got To know a little abour her journey… her hardwork .. May you always shine InshaAllah." Also Read - Rubina Dilaik's fans rally around her after she posts hard-hitting note on fat-shaming; Jaan Kumar Sanu, Stebin Ben come in support 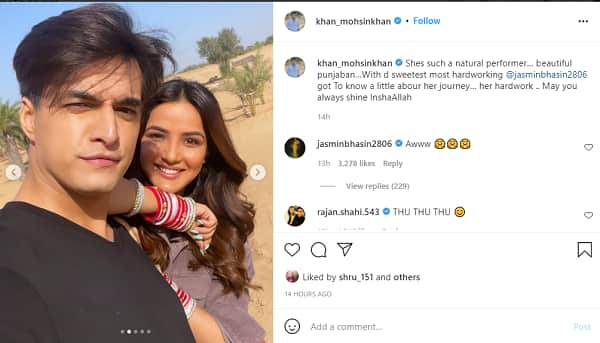 This happens to be Mohsin's first professional commitment after he left Yeh Rishta Kya Kehlata Hai. While his fans were devastated by his exit, they are happy that he is coming back so soon, even if it's a music video. Furthermore, it is said that he has been in talks with Yeh Rishta Kya Kehlata Hai maker Rajan Shahi for a series but it is still in the early developmental stage. Mohsin Khan is meanwhile open to exploring web series.