In the Janmashtami special episode of Kuch Rang Pyaar Ke Aise Bhi, we saw Ayushman calling Sonakshi aka Erica Fernandes 'Mumma' for the first time ever. The scene has left fans of the show very emotional.

Kuch Rang Pyaar Ke Aise's latest episode is winning the hearts of the audience. The Shaheer Sheikh and Erica Fernandes starrer TV show recently featured a very emotional scene. For those not in the know, the makers of Kuch Rang Pyaar Ke Aise Bhi brought in a twist by introducing a new character, a kid on the show. Ayushman is the biological child of Sonakshi and Dev. It so happened that he was replaced at his birth by a nurse for some money. When Dev got to know about Ayushman, he revealed the same to his family and got Ayushman home. Dev and Sonakshi later legally adopted Ayushman. Now, the two of them are trying to gel and bond with the little lad. And just recently in the Janmashtami special episode, they featured Ayushman calling Sonakshi 'Mumma' for the first time ever. The scene has left fans of the show very emotional. Also Read - Shivangi Joshi, Erica Fernandes, Surbhi Chandna and more: 7 TV divas and their fitness mantras will leave you inspired

They are showering the beautiful scene with love. The VG has been uploaded on the social media of the channel. The BGM of Tujhse naraz nahin zindagi when combined with the scene has tugged the heartstrings of the audience. Check out the videos here: Also Read - TRP Report Week 36: Rupali Ganguly-Gaurav Khanna's chemistry makes Anupamaa win audience's hearts again; Khatron Ke Khiladi out of Top 5

One of the fans wrote, "While I was listening to the song so intensely made me felt the moment of emotions of Sona and Ayush which were appreciated by everyone with tears of happiness when Ayush called Sona momma really that's the beauty of this sequence in Janmashtami pooja." Another one wrote, "Really it was very imotional. I was crying then for Sona." Yet another fan said, "One of the best moment... Eri acting perfect.. And bgm gives perfect vibe... KRPKAB is always best.." Check out their reactions here: Also Read - Hina Khan, Surbhi Chandna, Gauahar Khan and more TV hotties who set the Maldivian sun on fire – view pics 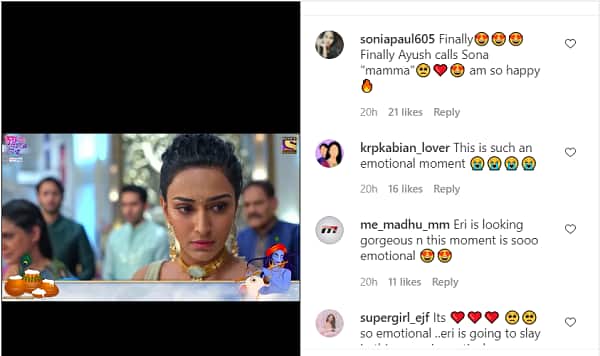 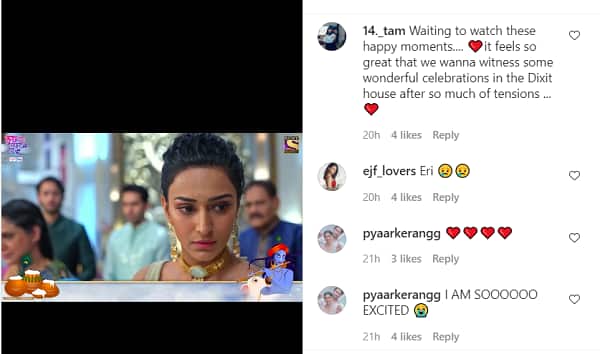