Rubina Dilaik and Abhinav Shukla had created a reel video on Aly-Jasmin's Tera Suit. Well, now it's Jasmin Bhasin and Aly Goni's turn to create a reel on Marjaneya. Have a dekko at the reel video here:

Rubina Dilaik and Abhinav Shukla's Marjaneya released a couple of days ago. The song soon became a hot trend on social media with fans of Rubina and Abhinav making reel videos on the same. Before Rubinav's Marjaneya had released, Jasmin Bhasin and Aly Goni's Tera Suit had dropped on the net. The video went viral quickly. The two couples were recently seen together inside the house of Bigg Boss 14. They did not share a very friendly equation inside the house. However, things seem to be cooling down a little now. Y'all would remember Rubina Dilaik and Abhinav Shukla had created a reel video on Aly-Jasmin's Tera Suit? Well, now it was JasLy's time to create a reel on Marjaneya and fans had been waiting for the same. Not anymore. Have a dekko at the reel video here: Also Read - Bigg Boss 14 winner Rubina Dilaik dishes out boss lady vibes in this co-ord set – view pics 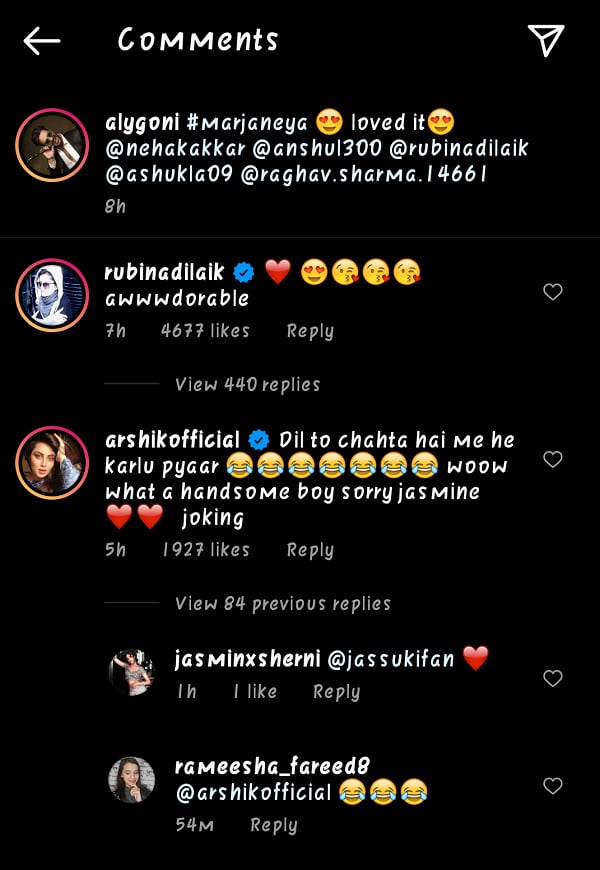 Meanwhile, after a nasty showdown inside the house of Bigg Boss, Jasmin Bhasin had stayed away from Rubina Dilaik. They shared a very hostile equation with each other on the show. Abhinav Shukla who had been close to Jasmin initially also distanced himself after the fallout. After getting eliminated, Abhinav had refused to acknowledge knowing Jasmin. On the other hand, Rubina had said that she would maintain her distance until the Dil Se Dil Tak actress herself extended the hand of friendship towards her. With them creating reels on each other’s music videos, have they buried the hatched? It remains to be seen. Meanwhile, how did you like Jasmin Bhasin and Aly Goni’s reel on Marjaneya? Let us know by tweeting @bollywood_life.