While nearly 45 per cent of the audience are eagerly waiting to see Sidharth Shukla sharing space with Prabhas in his upcoming mythological drama Adipurush, 43 per cent of the voters want to see SidNaaz collaborating again.

It wouldn't be wrong to say that Sidharth Shukla is the man of the hour. The handsome hunk has been hitting the right chords with the audience ever since he entered into Salman Khan hosted controversial reality show Bigg Boss 13. Not only did he emerge victorious but also won millions of hearts and earned a loyal fan base whom he fondly calls Sidhearts. The actor has been entertaining his fans, be it with his music videos with Shehnaaz Gill or his recently released web series Broken But Beautiful 3. And currently there have been several reports of him bagging certain projects that have left his fans even more excited. Also Read - Adipurush: THIS Malang actor joins the cast of Prabhas-Saif Ali Khan-Kriti Sanon's magnum opus

According to the reports, Sidharth and Shehnaaz are once again going to collaborate for a project. It might be yet another music video after Bhula Dunga and Shona Shona. It is also being said that the actor is going to team up with Monica Dogra for their upcoming web series. Moreover, reports of Sidharth playing Meghnad in Prabhas' Adipurush had been doing the rounds of the industry for a while now. The actor may have denied the reports but the buzz around it is refusing to die down. And if that was not enough, Sidharth is also going to share screen space with Jennifer Winget for an OTT project. Also Read - RRR, Pushpa, KGF 2, Liger and more: South films which will release in multiple languages

While an official confirmation is still awaited, fans are unable to keep calm and had been sharing their excitement on social media platforms. We had recently conducted a poll on Twitter to determine which of the Sidharth's projects the fans are most excited for. Also Read - Kiara Advani, Pooja Hegde, Kriti Sanon: These 6 Bollywood beauties are a HIT with south Indian filmmakers

The result is finally out and the audience has shortlisted their top 2 picks. While nearly 45 per cent of the audience are eagerly waiting to see Sidharth sharing space with Prabhas in his upcoming mythological drama Adipurush, 43 per cent of the voters want to see SidNaaz collaborating again. The remaining 11 per cent chose the project with Jennifer while nearly 2 per cent were excited for the Monica Dogra project. 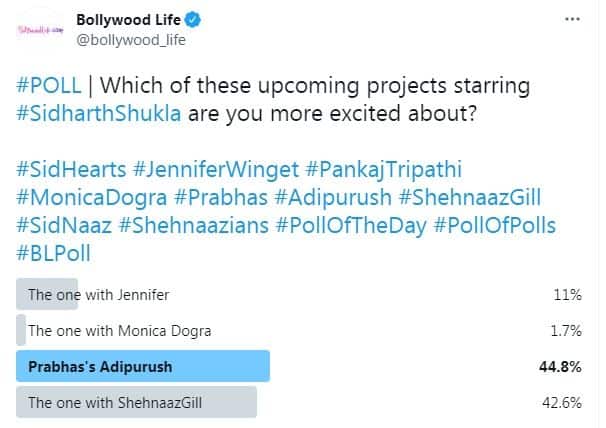 Sidharth is known for his roles in fiction TV soaps such as Balika Vadhu and Dil Se Dil Tak and reality shows such as Jhalak Dikhhla Jaa 6, Fear Factor: Khatron Ke Khiladi and Bigg Boss 13.