The verdict is out! Surbhi Jyoti's fans want to see her romance Sushant Singh Rajput for her Bollywood debut! Find out which actors lost to Sushant...

On TV actress Surbhi Jyoti's birthday, we had asked her fans if the actress makes her Bollywood debut then who should she romance on the silver screen. Surbhi was seen as Bela in the third season of Naagin and rose to popularity courtesy her TV series Qubool Hai! While chances are that she may reprise in the role of shape-shifting snake, but her Bollywood entry won't be a surprise. We offered her fans to vote for the Bollywood hunk, who should romance Surbhi Jyoti on the big screen. Kartik Aaryan, Sushant Singh Rajput, Ayushmann Khurrana and Vicky Kaushal were the options that we gave our readers. And while we expected that fans would want Surbhi to romance Kartik, the voters have shocked us with their choice. Also Read - WTF Wednesday: From Shama Sikander to Sri Reddy – their casting couch horrors continue to haunt the industry

According to our poll results, fans want Surbhi Jyoti and Sushant Singh Rajput to pair up. Interesting trivia about this pair is that both the actors started their journey from TV and have been a part of popular Ekta Kapoor shows. Interestingly, Surbhi entered the TV industry a year after Sushant Singh Rajput made his exit from the space. If their stint would have coincided on TV, we are sure fans would have enjoyed to see them romance in a daily soap. Surbhi and Sushant are known for showcasing intense emotions, therefore, to see them on the big screen in an intense love story is something we will definitely put our money on. Also Read - When birthday boy Ayushmann Khurrana gave up on his Bollywood career and started playing at college gigs 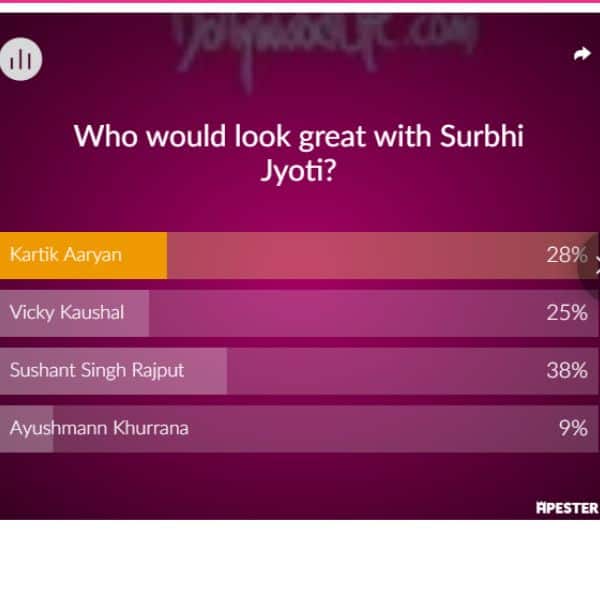 Now that the readers have spoken we think it is high time someone casts Surbhi Jyoti and Sushant Singh Rajput in a romantic saga.