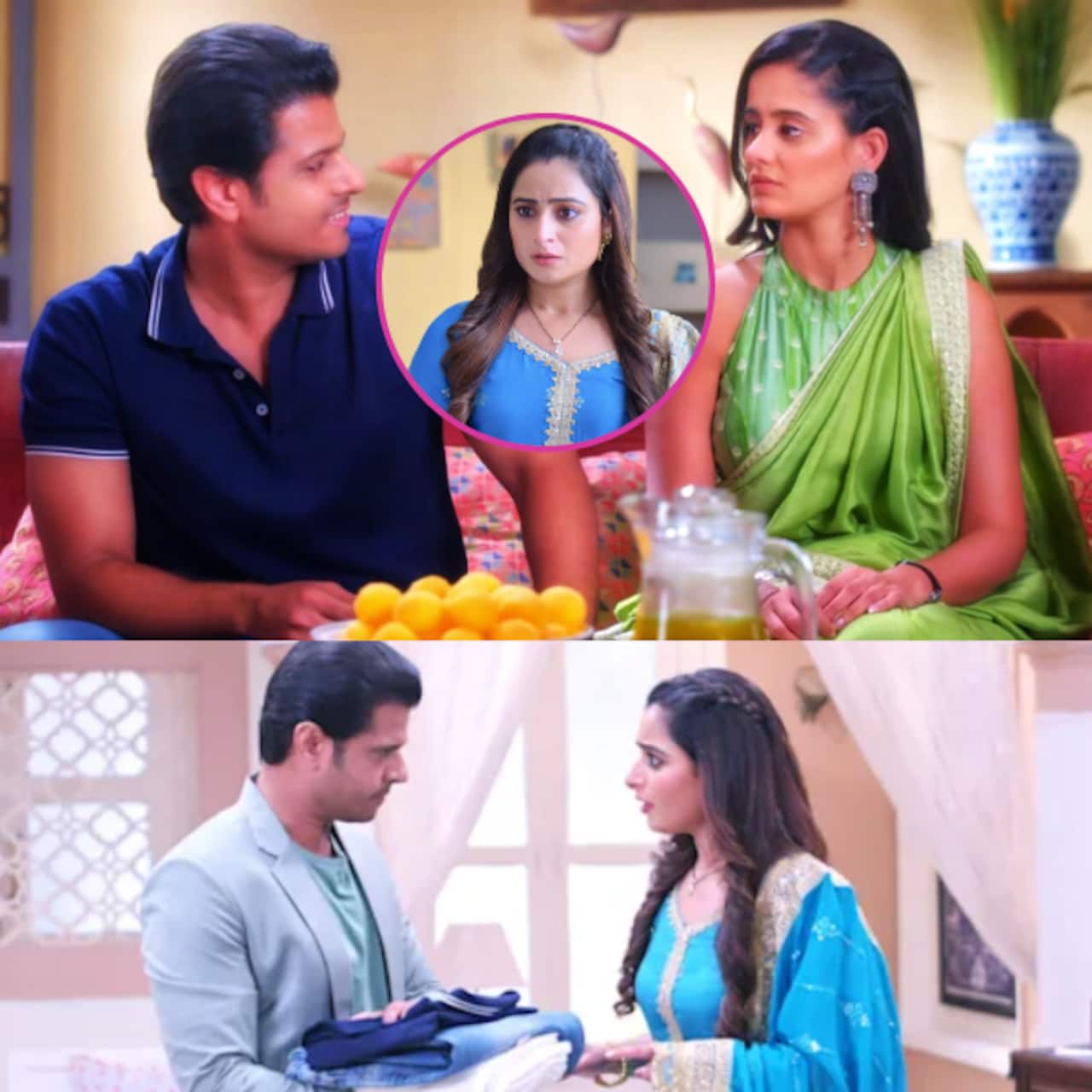 Pakhi will get restless when she is unable to reach Virat. The latter is spending some time doing their project at Sai's house. Aishwarya Sharma aka Pakhi and Mohit were attending a meeting while Virat was helping the kids in their project. When the meeting gets over, Pakhi tries getting in touch with Virat. However, there seems to be a network issue. When Pakhi reaches home, she reads Virat's message informing him about staying at Sai's place as Savi falls ill. Also Read - Ghum Hai Kisikey Pyaar Meiin star Ayesha Singh REACTS to negative and harsh comments; says, 'They are doing it for timepass'

Pakhi gets scared and leaves for Sai's place to get Virat (Neil Bhatt). She gets worried and starts imagining a scenario between Sai and Virat. Later, when Pakhi reaches Sai's home, she gets shocked on seeing Virat in a vest and a towel and starts berating him. When Sai assures her that nothing happened as she is imagining, Pakhi also lashes out at her. Virat slams her and reveals the truth. However, the latter blames Savi for everything. Ghum Hai Kisikey Pyaar Meiin makes headlines in Entertainment News every day. And Virat slamming Pakhi has become the talk of the town as well. Also Read - TRP List Week 4 2023: Anupamaa retains top spot, Pandya Store ties with Bigg Boss 16, Yeh Hai Chahatein sees jump [View Top TV Show List]

Fans are unhappy as Ayesha Singh aka Sai is shown weak

For fans, Sai Joshi is known for her fierceness and an open mind. Earlier, whenever Pakhi would taunt her or speak against her or anyone, Sai would always take a stand. However, Sai is now having measured responses towards Virat, Pakhi and Chavans, feel netizens. They were hoping Sai would give it back to Pakhi when she blames everything on Savi. Check out the tweets here:

WHY DID HE MISSED SAVI ENTIRE CHILDHOOD?????

WHAT'S THE REASON BEHIND THE SAME???

WHY WILL SAI FEEL GUILTY??? https://t.co/KINrtQidXx

That bitch clearly confessed today that all problem cause is savi she's doing all and why she fall sick today it's the future indication that lady can harm savi #saijoshi she needs to see your motherly side this time just burn her alive #AyeshaSingh #ghumhaikisikeypyaarmeiin ? pic.twitter.com/6tF6YTc1ue

The bitch have to audacity to say mere pati se dur raho warna aacha nahi hoga tumhare liye aur tumne abhi tak meri buri side dheki nahi hai like seriously why #saijoshi not remind that bitch her doings in future it's a due and you have to #AyeshaSingh #ghumhaikisikeypyaarmeiin pic.twitter.com/Ac3xQzHsWb

Waiting for the day Sai finally snaps and tells Pakhi off. There has to be a breaking point. The first words out of Sai's mouth should be exactly what this picture says...every word after that should be a 1000× worse. Pakhi deserves to be read for filth.#GhumHaiKisikeyPyaarMeiin pic.twitter.com/t2y6WXAnvZ

@sidd_vankar when will Sai open her mouth n give back to bacha chor !!!! Too much dragging on #GhumHaiKisikeyPyaarMeiin

I want her remind the lady's husband jailed you for coming into my house and doing tamsha today what she done comes to your house like gundi and physically pushed you and audacity to yell and accuse you #saijoshi is fire and she needs answer #AyeshaSingh #ghumhaikisikeypyaarmeiin pic.twitter.com/aIYk15TLbB

#GhumHaiKisikeyPyaarMeiin It is hightime Sai should shut up Patralekha for the shit she is speaking not bothering about sleeping kids.She should prevent her from coming to her house.Sai should place a board reading’ Pakhi not allowed.’

Was wondering, how much more fun it would have been if the plot was Sai returning to serve revenge to Patralekha by putting her through everything she herself experienced before... ??#GhumHaiKisikeyPyaarMeiin

Why is Sai so meek in front of Didi? Please DO NOT RUIN SAI?

Why isn’t she giving it to Didi instead of behaving like she is the teesra? Sai please don’t be a pendulum like Virat ?
#GhumHaiKisikeyPyaarMeiin

The writers conveniently put a plaster on Sai mouth. When so called wife and criminal was talking nonsense about savi wished Sai would give big slap and put her in her place that's is outside her house. But too much expectations from writers. #ghumhaikisikeypyaarmeiin


The episode ended right when Pakhi blamed Savi for all her troubles. You never know, in tomorrow's episode of Ghum Hai Kisikey Pyaar Meiin, Sai might give it back to Pakhi. Stay tuned to BollywoodLife for the latest scoops and updates from Bollywood, Hollywood, South, TV and Web-Series.
Click to join us on Facebook, Twitter, Youtube and Instagram.
Also follow us on Facebook Messenger for latest updates.
Advertisement