Guddan Tumse Na Ho Payega 12 March 2020 Preview: In tonight's episode Ganga reveals that she is the eldest bahu of Jindal family which shocks everyone 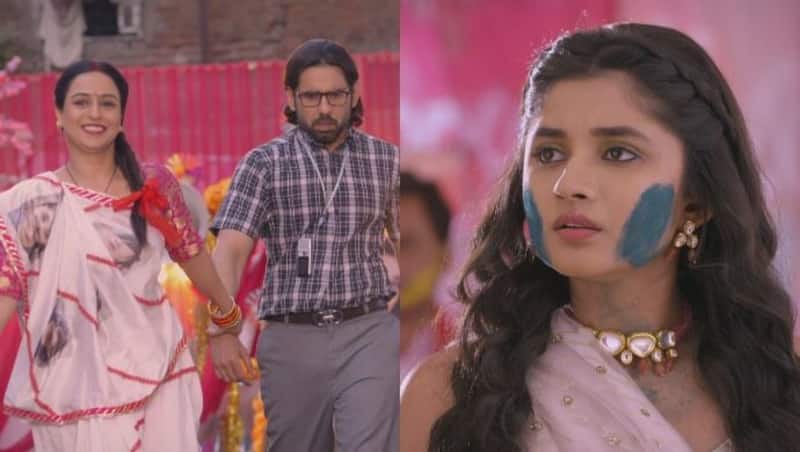 In the last episode we saw that Saru again makes a plan to ruin Guddan’s face y mixing glass powder in the colour. Akshat is about to throw the colour on Guddan but Durga pushes him away. Guddan wins the challenge as Akshat and Guddan have challenged each other about who will put colour to whom first. Saru gets disappointed. Later on everyone finds that the Holi preparation is done with all the favourite things. Guddan is very happy to see that but Akshat finds it weird. Guddan asks him not to think too much as her fans often do such things. Guddan and Akshat then perform on popular Holi songs. Later on Ganga surprises Guddan as she says that she is her biggest fan. Ganga tells her that she is the elder bahu of the Jindal family as her husband is the eldest son. Akshat, Guddan and everyone gets shocked listening to Ganga. Also Read - Kanika Mann Birthday Celebration: Sriti Jha, Siddharth Nigam, Rashami Desai and others party with Khatron Ke Khiladi 12 star [View Pics]

Tonight’s episode begins with a flashback where the Jindal family is enjoying Holi. Akshat takes the water balloon from Saru’s hand and runs behind Guddan to put it on her. Durga and Lakshmi also defend Guddan. After a while Aarav snatches the balloon from Akshat’s hand and runs away. Saru goes to find him. She threatens him to give it to him. Aarav throws it in the air but Saru catches in her pallu. She again targets Guddan and throws the balloon towards Guddan. But the balloon comes back to her as it bumps with a dupatta and then bumps into her face. Saru starts screaming out saying that her face is ruined. Everyone reaches to see her but then they all notice that it is just colour on her face. Saru then realises that she is safe. Durga becomes suspicious that Saru might have spiked the colour but then Saru pretends that she was scared as the balloon came in speed. Saru wonders as the water balloon she had made has been exchanged. Also Read - Khatron Ke Khiladi 12 grand finale written update: Tushar Kalia BEATS Faisal Shaikh and Mohit Malik to be the ultimate winner

On the other hand Ganga is shown blowing off the same water balloon. Ganga makes her entry at the Holi party being Guddan’s biggest fan. Ganga gets mesmerised to see Guddan right in front of her. Guddan also gets impressed to see Ganga’s preparation. Ganga reveals that she had done the entire preparation of Holi party right from food for Guddan. She also shares that she is the biggest fan of Guddan. Guddan asks Ganga about her identity. Everyone gets shocked as Ganga reveals that she is the eldest daughter in law of Jindal family. Kishor and Vardaan get angry with Ganga as they have lost their mother long back. Ganga tells them that their father has married to her later on. Guddan wonders to hear all that Ganga tells them all. Ganga finds that no one is able to believe her. So she calls out her husband and asks him to come in front of all. But her husband hesitates to do so. Ganga holds his hand and brings him to all of them. Also Read - Khatron Ke Khiladi 12 grand finale: From Pratik Sehajpal's 'zero enthusiasm' to Mohit Malik losing his memory — The top highlights of Rohit Shetty's show

Akshat, Dadi, Vardaan and Kishor get emotional to see her husband as he is Akshat’s elder brother. He seeks Dadi’s blessings. But no one reacts on that. Ganga requests Guddan to help her patch up between her husband and the family. But Guddan is still in shock as all that is so new for her. No one accepts Ganga’s husband but she still believes that with time everything will be fine with time. Dadi asks them to leave from there. Akshat announces that the party is over. He asks all the guests to go home. All of them leave from there ignoring Ganga and her husband. Guddan sees that Ganga is asking her husband that she will stay with the family as one or the other day, they all will accept him. Her husband has no hopes but Ganga still asks him to be positive. Guddan keeps looking at them. Will Guddan let them stay in the Jindal house? Stay hooked to find out.