Guddan Tumse Na Ho Payega 24 May 2019 written update of full episode: Guddan and Akshat find out that Durga's killer is one of their family members

Guddan Tumse Na Ho Payega 24 May 2019 written update of full episode: Guddan and Akshat find out that the one who tried to kill Durga is from their family itself 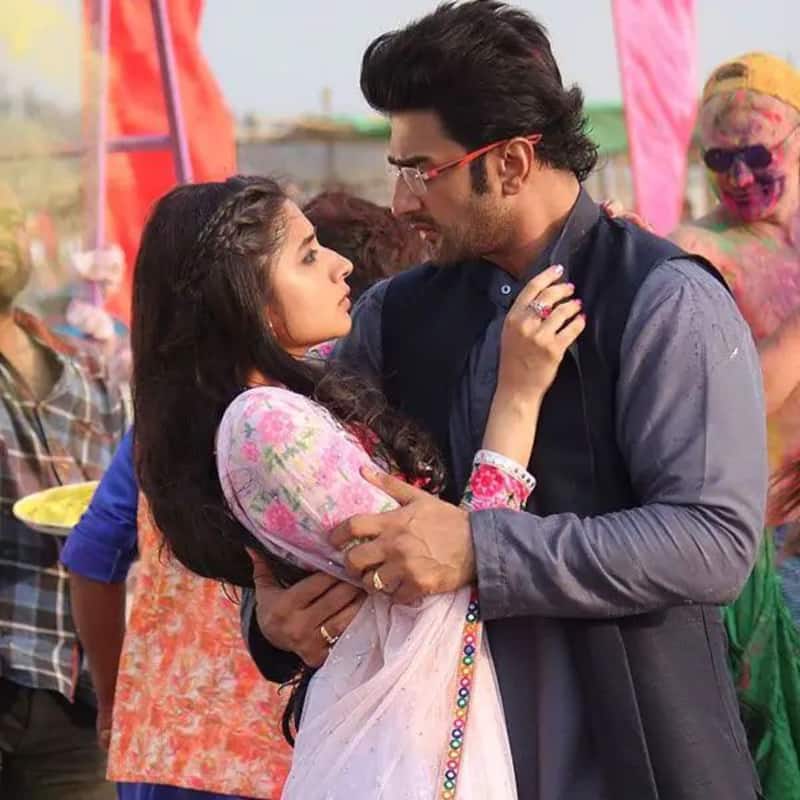 In the last episode of Guddan Tumse Na Ho Payega we saw that Guddan becomes a strict mother-in-law and is successful in her task to bring bua, Durga and Saru together. Akshat on the other hand tries to search for the culprit of Durga and tells Guddan that he cannot stay quiet until he finds who tried to kill Durga. Also Read - Guddan Tumse Na Ho Payega actress Kanika Mann to make her digital debut opposite THIS Khatron Ke Khiladi 11 contestant

Today's episode begins with Guddan's blanket flies and falls outside their house. Guddan and Akshat go behind the blanket to get it. They go out and it is dark while Guddan is afraid of the dark. She is scared as she walks when a mouse touches her legs and she screams. She tells Akshat that they should go back and they don't need the blanket. Akshat and Guddan are about to leave when Guddan sees something fallen on the road. They reach and find the piece of the saree they have seen in the video footage. The saree piece has a tailor's name who had stitched it. Akshat tells Guddan that this means that they are very close to the culprit which is why the culprit tried to finish these proofs. They decide to go to the tailor's shop the next day. Guddan and Akshat go to the tailor's shop to ask him does he know who's has stitched this saree from him. The tailor says that the saree is from his shop and he had only a few pieces of that saree which were all sold. Guddan and Akshat request him to give them the details of the customers who have purchased the saree. The tailor refuses and says that he cannot give any of his customers information.They request the tailor but he doesn't agree. Guddan then joins her hands and requests the tailor to show them the details as this can help them gain their lost respect. The tailor then agrees and shows them a register. They read the names but fail to recognise anyone. They give the tailor the register and are about to leave when he tells then that there is one more lady who had come and asked him to stitch the same saree within a day. He said that she forced him to stitched the saree even when he refused. She offered him double money and asked him to make it. The tailor says that his daughter's wedding is nearing so he agreed and stitched one for her. Guddan and Akshat are shocked to hear this and ask the tailor whether he knows her name or can recognise her. The tailor that she refused to tell her name and had worn a burkha so he could not see her. The tailor tells them that the lady had given her address to get the delivery and he has the address. He shows them the address and they are shocked to know the address is of their house itself. Akshat is angry and is about to leave. Guddan asks him to calm down. Guddan and Akshat return home and Akshat is in anger. Guddan tells him to be calm and solve the matter peacefully when Akshat tells her that the culprit is from their house and he cannot tolerate this. He rushes and goes in the house and Guddan tries to stop Akshat and says she thinks that the culprit must not be from their family. Inside the house everyone is having Mango and are happily chatting. Daadi tells Durga that the mangoes are very nice and sweet. Bua says that they are sweet but not as sweet as those mangoes which they get in their village. She tells everyone that her husband used to bring those mangoes for her and will bring it even today when he comes to take her. Akshat enters in anger and Guddan tells him that we can have a talk calmly also. Bua sees them coming and taunts Guddan that she looks sad and it seems that she has accepted her defeat. She tells Guddan that she is here for some time so Guddan can apologise to her. Akshat stops bua and tells her that there are much more important things than her silly fights. Akshat asks Durga to call other family member immediately. Suddenly Akshat gets a calls and he is shocked. Guddan asks him who is on the phone and what had happened. Akshat informs everyone that phupha ji’s bus met an accident. Shanti bua is shocked and says that this can't happen and faints. Guddan holds her asks her to be calm and says maybe phupha ji is not in that bus. Akshat gets a call again and he tells everyone that he got a call from hospital to take away phupha ji's belongings. Everyone is shattered and sad to know that phupha ji is no more. Also Read - Barrister Babu: Guddan Tumse Na Ho Payega actress Kanika Mann to play grown-up Bondita in the show? Here's what we know

Phupha ji's funeral rituals begin. Angad serves water to everyone and comes near Revati to give her water when Perv watches him in anger. Some ladies come near Shanti bua to take off her sindoor and bangles while she refuses to remove it but the ladies force her and tell her that this is tradition. Bua is not ready to remove her bangles and sindoor but the ladies force her and Guddan stops them. She says that can't they see she is upset and fighting her own battle. A woman says this is ritual and bua has always favoured it. Guddan says she respects them but bua doesn’t want to take them off so no one should not force them. The women tell her that today's generation girls like you won't understand this. Durga gets up and stops Guddan and says that the situation may be sad but need to behave strictly and follow the tradition. Guddan says no but Durga argues and says that bua ji would have done the same if she was in her place. Durga says we have to do the tradition even if bua wants to do it or not. Guddan shouts at her and says that no one will force bua ji. Durga says don’t do this drama. She doesn’t believe in all this either. Guddan holds her hand and says she will be bua's friend and sits down with bua ji and hugs her. Suddenly phupha ji arrives and calls bua. Bua and everyone are delighted to see him and bua runs and takes his blessings. Phupha ji tell bua ji that he missed his bus because he was buying mangoes for her. Guddan then says if phupha ji is alive then they should remove the garland on his photo. Later on Bua ji and phupha ji are about to leave. Guddan touches bua's feet and bua says she won't give her blessings. She tells Guddan that she will make her friend and hugs her. Guddan is happy and smiles. Stay tuned to find what happens next. Also Read - Guddan Tumse Na Ho Payega's Kanika Mann and Nishant Singh Malkhani's fun goofy pictures speak volumes about their bond