Hardik Pandya and Natasa Stankovic's baby boy is named Agastya. The cricketer reveals it as he poses with a mini Mercedes sent for his son

Hardik Pandya and Natasa Stankovic are the most adorable new parents in town. They had their first baby on July 30, 2020. The couple had been dating since more than a year now. Today, Hardik Pandya revealed the name of his infant son. They have christened him Agastya. It is name of Lord Shiva. Those who follow Indian mythology know it is also the name of a saint, who travelled to the South of India. Hardik Pandya posted a picture of himself sitting on a mini Mercedes as he thanked the brand for sending a toy model of the luxury car for his son. The mini model came from Bangalore. As we know, Hardik Pandya loves cars and this toy model is quite a good one. Also Read - Indian cricketer Deepak Chahar to marry former Bigg Boss contestant Sidharth Bhardwaj's sister Jaya? This is what we know 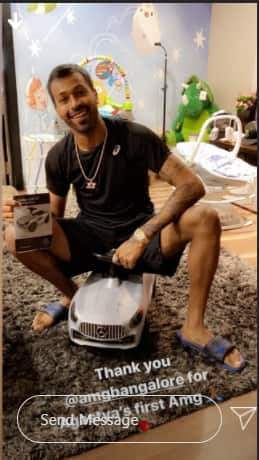 The baby boy has made the couple cuter. In a recent pic shared by Natasa Stankovic, we can see him giving her a peck on the cheek. The news of Hardik Pandya - Natasa Stankovic becoming parents was one of the brighter developments of 2020. The two got engaged at the start of January, 2020. He proposed to her with a ring in Dubai. Hardik Pandya is a part of the Mumbai Indians IPL team. He has joined his teammates in the nets. It seems they will face the Sunrisers Hyderabad in the opening match. Also Read - Kim Sharma-Leander Paes, MS Dhoni-Deepika Padukone and more rumoured Bollywood actress-athlete affairs that SHOCKED everyone