Today morning, we woke to the sad news that the famous Notre Dame Cathedral of Paris had caught fire and its spire was damaged. It seems renovation work was on in the cathedral when this happened. Fifteen hours after the fire broke out, it was extinguished by the firefighters. Parisians had gathered nearby to see the sight, some of them in tears while others prayed quietly. The church is a symbol of France. Indian celebs like Boman Irani, Vicky Kaushal, Arjun Kapoor and Tamannaah mourned the monumental loss to the heritage site. Even Hina Khan took to Insta to share an image from her trip to Paris. We can see her family and she posing against the iconic backdrop. But she was hopeful that the cathedral would rise again. The devastating fire seems to have united all citizens of Paris who have vowed to bring back the glory of the monument.

Hollywood star Salma Hayek tweets to Akshay Kumar, wishing him for the success of Toilet - Ek Prem Katha and this is what he replied 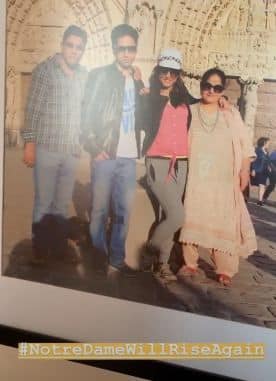 ‪She’s been around for over 800 years not just as a testament of our history but also place for many that found their peace, hope and faith in. This iconic monument is an inspiration to artists across the globe and it’s really sad to know that humanity has lost #NotreDame today. ‬

Devastated on seeing the fire at the Notre Dame Cathedral.. a piece of history turn to ashes.. Our hearts are with the people of France ❤

The Notre Dame tragedy is hard to watch. The people of France must be devastated. We hope and pray that its restoration will serve to heal.#NotreDame #Fire#NotreDameCathedral

France's President Emmanuel Macron has promised that the roof and spire of the Gothic masterpiece would be rebuilt. Help has already started pouring in from many quarters. French billionaire Bernard Arnault who controls the LVMH group said the firm would contribute 200 million euros ($226million) for restoration work. "The Arnault family and LVMH, in solidarity after this national tragedy, will participate in the reconstruction of this extraordinary cathedral, a symbol of France, its heritage and its unity," they said in an official statement. Another French Billionaire, François-Henri Pinault who heads the luxury group, Kering has also promised to donate 100 million euros for the Notre Dame Cathedral. He is the husband of actress Salma Hayek. Stay tuned to BL for more updates!