Kasautii Zindagii Kay 2 actress Hina Khan has finally met her beau Rocky Jaiswal after a long time and she has expressed her happiness with an adorable picture with him.

Hina Khan who was seen as Komolika in Kasautii Zindagii Kay 2 is one of the most loved actresses and she has been at the top of her career. Her film Hacked released recently and she did receive a lot of positive responses from the audience as well her friends from the industry. Hina Khan began her career with Rajan Shahi's Yeh Rishta Kya Kehlata Hai as Akshara and became a household name post that. She left the show and was then seen Khatron Ke Khiladi 8 and emerged as the first runner-up. We saw a totally different look of Hina since then. The actress then went on to do Salman Khan's Bigg Boss 11 and was again declared as the first runner-up in the show. Hina Khan did the unexpected post that we saw her in a negative role as Komolika in Kasautii Zindagii Kay 2. She also made her Cannes debut in 2019. Now, the actress has been impressing us with her performances and also her social media game. Also Read - Shaheer Sheikh, Rahul Vaidya, Aishwarya Sharma-Neil Bhatt and more – meet the TV Instagrammers of the week who made headlines for surprising and shocking reasons

The actress is head over heels in love with Rocky Jaiswal and her Instagram account is proof. The actress used to often hangout with Rocky Jaiswal before lockdown and is very close to him. However, due to the lockdown, every one of us has to be home, and going out with friends and family has become like a dream. Hina Khan is happily enjoying her family and had some grand Eid celebrations. However, she was unable to meet beau Rocky Jaiswal due to the lockdown but now he has come to her and her happiness knows no bounds. She posted a cute lovey-dovey picture with Rocky Jaiswal on her Instagram stories and wrote, "after ages". Also Read - Trending OTT News Today: Hina Khan expresses excitement and concerns about Karan Johar's Bigg Boss 15 OTT, Prithviraj Sukumaran's Kuruthi poster, release date out and more 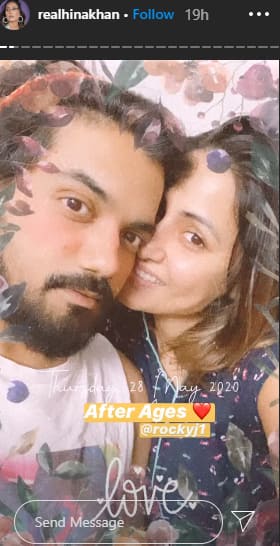 Well, these two never fail to give us #couplegoals and we loved this beautiful selfie of them together.