Neha Kakkar's latest pictures in a bathrobe are going viral on social media like a wild fire. And the pictures have left Rohanpreet Singh gasping for his breath. Have a dekko at the post below:

Neha Kakkar tied the knot with Punjabi singer Rohanpreet Singh last year in October. The two love birds met on the sets of their music video Nehu Da Vyah. The two fell in love with each other on the sets and eventually tied the knot. And ever since, the two have been grabbing headlines for their mushy-mushy posts and comments on each others' posts. And that's what has happened even now. Neha Kakkar shared pictures in a bathrobe on her gram, that left Rohanpreet speechless and out of breath. Even Neha's fans are going crazy over her pictures. Talking about the pictures, the Indian Idol 12 judge is seen flashing her pretty smile in the picture as always. She wished everyone good morning and began her day with positivity. She wrote, "Good Morning! Shower done, Let’s begin the day with some Positivi - Tea." Have a dekko at her post here: Also Read - Indian Idol 12: From girl-next door in the beginning to bonafide DIVA now; Arunita Kanjilal's transformation is one for the ages – view pics

However, it is Rohanpreet Singh's mushy comment on her post that have all the attention of the fans. He wrote, "Ahm Ahm!!
Wow Hiiii!! Oh I Mean How Beautiful!!!!" Have a dekko at his comment below: Also Read - Indian Idol 12: Pawandeep Rajan, Arunita Kanjilal, Shanmukhapriya and others set the internet on fire with their look in music video, Manzilon Ka Junoon – view pics 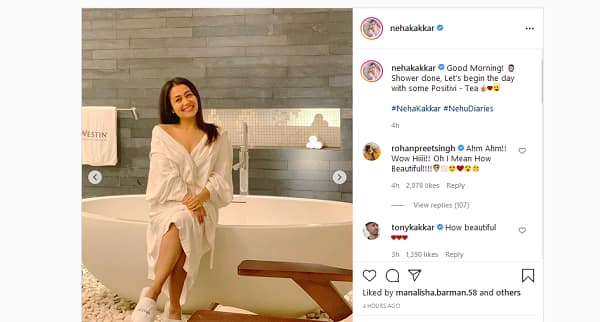 Talking about their first meeting and first impression, Neha had said, "My first impression of him was that he was so good to each and every person on the set. And undeniably, he was the cutest boy I had ever come across. The attraction was strong. I think it was really in those initial moments itself that I knew he was the one for me." Rohanpreet, on the other hand, wrote, "We literally met for the first time on the set of the song we did together - Nehu Ka Vyah and I didn’t even realise what she wrote for that song would come true one day. It literally changed my life for the best." Aren't these two the cutest? Let us know your thoughts by tweeting @bollywood_life.