Indian Idol 12: Thumping majority feels that Pawandeep Rajan is just a puppet in the hands of the makers — view poll result

Indian Idol 12: A number of people feel that Pawandeep Rajan is being treated in a shabby manner by the showrunners view poll result

Indian Idol 12 is doing well when it comes to TRPs. But the show has been called out for fake content, melodrama and unfair eliminations. So far, the star of the show has been Pawandeep Rajan. The young man has a melodious voice and is adept at playing many musical instruments. Pawandeep Rajan and Arunita Kanjilal's duets are being loved by the young and old alike. However, fans feel that Pawandeep Rajan is now being just utilized by the makers. He is now in the bottom. There is no chance he could be there given the kind of votes he has been getting all through the show. Also Read - Indian Idol 12: Pawandeep Rajan-Arunita Kanjilal's bond in latest episode will remind you of Shah Rukh Khan and Rani Mukerji from KKHH

Fans are also upset with the fact that his screen time has kind of reduced. They even planned supportive trends like #OurPridePawandeep. It is only fair given the kind of eyeballs the young man has brought on the show. We conducted a poll to ask if Pawandeep Rajan was just treated like a puppet by the makers. Close to the 90 per cent of the viewers felt the same way. They feel he is being just used by the show runners. Let us see if they take cognizance and increase his air time. Check out the poll results... Also Read - Indian Idol 12 winner revealed: Pawandeep Rajan to beat Arunita Kanjilal, Shanmukhapriya, Mohd Danish and take home the trophy? 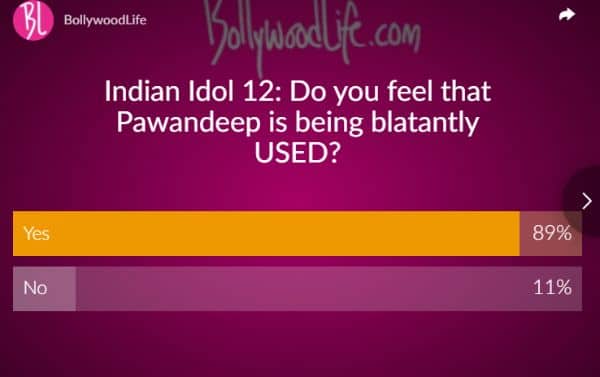 Pawandeep Rajan is from Champawat in Uttarakhand. His father is a musician in a village. He has done his studies from Kumaon University and his sisters are also into singing. We really hope to see more of him on the show. Pawandeep Rajan has denied any real life romance with Arunita Kanjilal.