Pawandeep Rajan and Arunita Kanjilal remained in the news due to their alleged romance on Indian Idol 12.

Indian Idol 12 was one of the longest running seasons of the singing reality show. In the end, it was Pawandeep Rajan who lifted the grand trophy. The contestant did not just remain in the news for his singing but his connection with Arunita Kanjilal also kept him buzzing. The alleged love story of Arunita and Pawandeep managed to get good TRPs of the show. Well, even after the show has come to an end, we see Pawandeep and Arunita enthraling all with their videos. Also Read - Indian Idol 12's Pawandeep Rajan and Arunita Kanjilal BEAT Salman Khan in the list of popular non-fiction personalities on TV – view complete list

Recently, a video of the two dancing on Shershaah's song went viral. In the video, we see Arunita and Pawandeep pulling off some romantic dance moves. While some of the fans are happy to see them together and are calling them a wonderful pair, some want them to just stick to singing. A comment read, "Can u guys just stick to singing ....cut this acting crap ....it's a bit too much." Another comment read, "Kya notanki bna k rkh diya fame paane k liye dono ne." Another one joked, "Dance show jite ye log ???" Also Read - TV News Weekly Rewind: Bigg Boss 15 participants, Shaheer Sheikh-Ruchikaa Kapoor welcome baby girl, Shehnaaz Gill coping up after Sidharth Shukla's demise and more 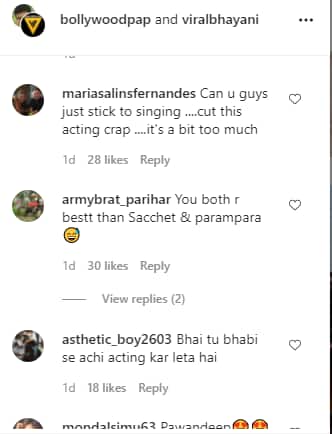 In the past, both Arunita and Pawandeep have spoken about the bond they share and stated that they are nothing more than just good friends. Arunita was quoted saying to Indian Express, "Honestly, we are very close friends. And I share the same equation with my other co-contestants too. It’s a show, and a lot of things are done just for fun. I think people shouldn’t take everything seriously." Pawandeep had also stated that there is nothing between the two. Well, lovers or not, they have become pretty famous, that is for sure. They recently met Hrithik Roshan and family and their pictures have gone viral.