Qubool Hai actor, Karanvir Bohra shared an adorable video a couple of hours ago wherein he is seen holding the little one in his arms. "It's such a good feeling," he says gushing over his three little angels. Check out his post below:

Karanvir Bohra and Teejay Sidhu welcomed two days ago. The now-father of three is on cloud nine and cannot stop gushing about his newborn and cannot stop cradling her in his arms. Karanvir Bohra is already a doting father to twin daughter, Raya Bella and Vienna Bohra and the third angel has put him on cloud nine yet again. The actor is so stoked that he asked fans to call him Charlie and he now has three angels in his life. The actor shared an adorable video a couple of hours ago wherein he is seen holding the little one in his arms. "It's such a good feeling," he says gushing over his three little angels. He then lovingly looks at the little one and calls her super cute. He later kisses her and we couldn't stop ourselves from going AWW. "Tum hi ho pehle,tum hi ho akhir".....That's How I'm going to be with all my daughter's and with the people who are my heart.... There is room for so much love, but this one is so so so special।। #myholytrinity is complete #laxmisaraswatiparvati," Karanvir Bohra captioned the video. Check out the super adorable video below: Also Read - Amidst Munmun Dutta-Raj Anadkat dating reports, here are 7 TV actresses who fell in love with younger men – view pics

A couple of hours ago, Karanvir had shared a picture with the newborn. In the post, we can see the cutie sleeping on her father's belly. Karanvir had revealed that she doesn't like to sleep in her crib or in a cot and hence he lets her sleep on his belly. "She doesn't want to be in a cot or crib - she sleeps best like this! People will say I am spoiling her too much. But I can't help it - that's the kind of Dad I am. She brings out more love in me than I even knew I had. @bombaysunshine Sweety, thanks for this picture," Karanvir Bohra captioned the picture. Check it out below: Also Read - Anita Hassanandani's munchkin Aaravv gives the cutest reactions as Karanvir Bohra tries to befriend him at the airport — watch video

Teejay Sidhu had commented on the post and thanked him for all his efforts. "Welcome sweety! I appreciate all your help!!" she had said. Check it out below: Also Read - Naagin 6: As we eagerly wait for the show, here's a quick NAAGIN QUIZ for all Naaglok fans 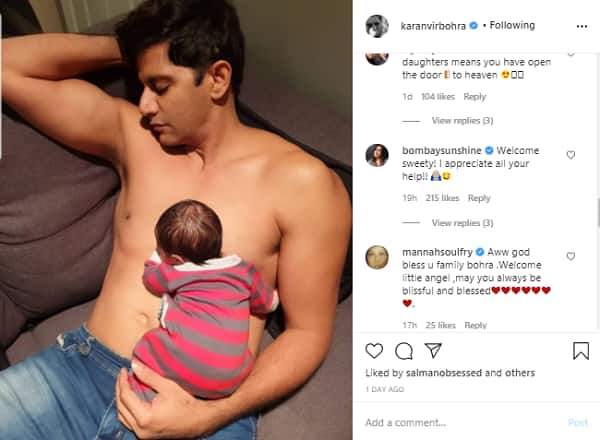 We cannot wait to see the third angel!