As the day comes to an end, here's all the scoop from Telly-land. From Mandar Chandwadkar aka Atmaram Tukaram Bhide of TMKOC showing off his singing talent to Hina Khan talking about Aamir Khan-Kiran Rao divorce, here's all that happened.

We are back with the latest dose of all the trending stories from the Television industry. As the day comes to an end, here' a look at the important events that kept television stars in the news. Mandar Chandwadkar who plays Atmaram Tukaram Bhide in SAB TV's comedy show Taarak Mehta Ka Ooltah Chashmah impressed all with his singing talent while Yeh Rishta Kya Kehlata Hai fame Hina Khan shared her strong take on Aamir Khan-Kiran Rao divorce. Also Read - Trending Entertainment News Today – Saif Ali Khan reveals one thing he would not dare to do with Kareena Kapoor Khan; Kriti Sanon celebrates her birthday with the media

Taking to his Instagram account, Mandar Chandwadkar who essays the role of Atmaram Tukaram Bhide shared a few videos as he crooned SP Balasubramanyam's songs. He shared the videos with the caption, "Missing u sp bala sir... this was on demand of my director @malavrajda..#spbala Subramanium#singers#keepsupporting#behappy#tmkoc." Also Read - Throwback: When Tiger Shroff spoke about the ‘worst’ phase of his life and revealed he had to sleep on the floor

Bigg Boss 14 fame Nikki Tamboli lost her brother two months ago. Remembering the day, Nikki made a social media post that read, "2 months today bhaiya. I know you are happy now and no more in pain. I feel good for you as you are in peace and not facing any trouble. Whereas [I] feel bad for myself for never accepting the fact that you are gone. (sic)."

Why SRK hosted only one season of Kaun Banega Crorepati?

In his recent interview with Etimes, producer Siddharth Basu revealed why Shah Rukh Khan hosted only one season of Kaun Banega Crorepati. "I think SRK did KBC in his own way with charm and wit, and as far as I know, it garnered good ratings. We have done three shows with SRK, and I believe he is one of the most natural TV hosts who can think on his feet.” He did mention thought that comparisons with Amitabh Bachchan were one of the main reasons why SRK was a part of only one season.

As Aamir Khan and Kiran Rao announced their divorce, Hina Khan took to her social media account to talk about the same. On Insta stories, she wrote, "Maturity starts when the drama ends.. Thinkkkk. Period.” Next post read, “An innocent child’s shoulders were not built to bear the weight of their parents wrong decisions and choices.. Let’s be graceful for the sake of our children.. Now or in further.. Plzzzzzz.” 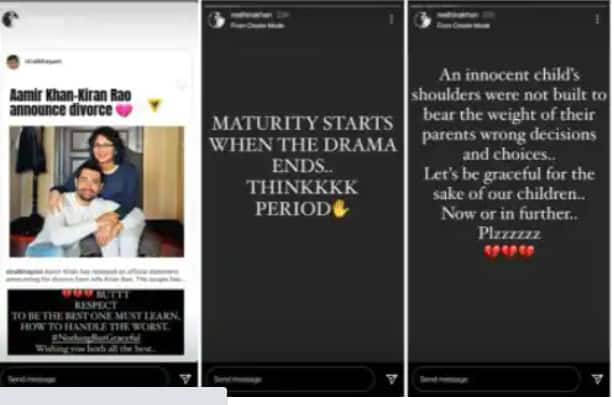 Rakhi Sawant's mother's reaction to her incident with Mika Singh

In her latest interview, Rakhi Sawant revealed how her mother reacted to her controversies. To Bollywood Bubble, she was quoted saying, "People always tell me I'm an attention seeker. Guys, I am not an attention seeker. The media loves me... There was a time when my mother told me, 'What is this, your controversies? I wish you died the moment you were born.' This happened after my family turned on my mother, after my incident with Mika Singh. My father used to beat my mom. I told her, 'Nobody is going to give me a crown the moment I enter Bollywood, let me struggle, give me freedom. I am not Amitabh Bachchan or Anil Kapoor's daughter. I haven't even gone to high school."