Karan Kundrra goes down on his knees for Tejasswi Prakash on their romantic tea date; TejRan fans say 'evil eyes off'

Karan Kundrra and Tejasswi Prakash went on a romantic tea date together. In the video, Karan went down on his knees and gave a bouquet to his ladylove Tejasswi. 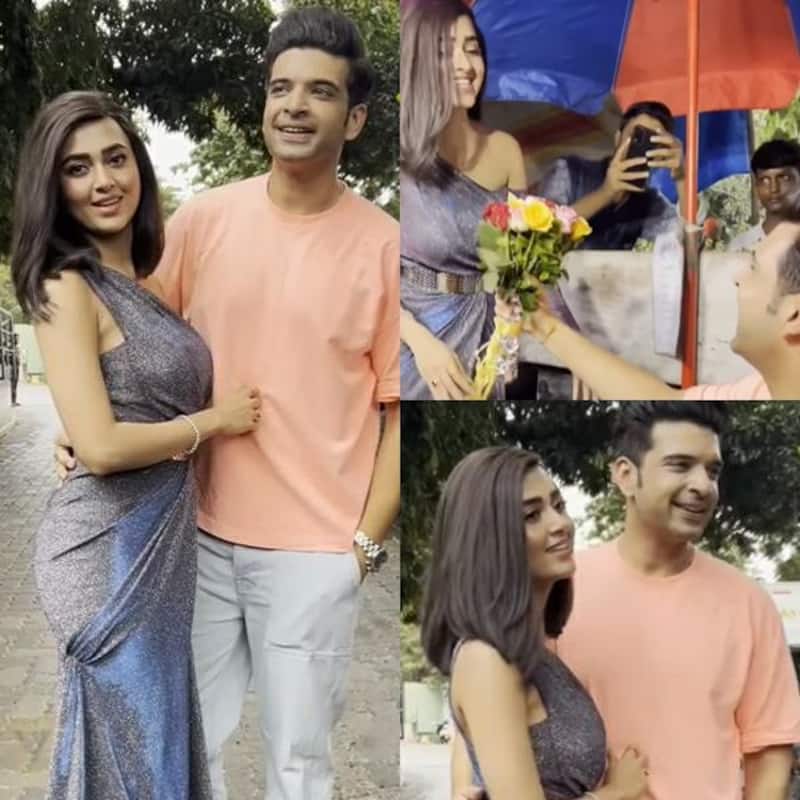 Bigg Boss 15 fame Karan Kundrra and Tejasswi Prakash are one of the most talked-about couples in the television industry. The two fell in love with each other inside Salman Khan's popular reality show Bigg Boss 15. Their connection grew stronger with each other post their exit from the show. Tejasswi and Karan have been quite vocal about their relationship and manage to amaze fans with their amazing chemistry. Also Read - Aishwarya Rai Bachchan refused to join Ponniyin Selvan team on The Kapil Sharma Show because of Salman Khan? Here's the truth

On Saturday, both Tejasswi and Karan enjoyed themselves to the fullest as they went out on a romantic tea date together. The head-over-heels love couple won hearts with their romance. In the video, Karan went down on his knees and gave a bouquet to his ladylove Tejasswi. The two were seen laughing and enjoying their moment. Also Read - Rashmika Mandanna makes Salman Khan groove to Pushpa song Sami; fans want them in a film together [Watch Video]

Naagin 6 actress Tejasswi looks ravishing in a shimmery one-shouldered dress, while Karan looks handsome in a pink tee paired with white pants. The two complement each other and look ultra-stylish. TejRan fans got excited and filled the comments section with love. One user wrote, 'May god bless them with all the happiness in the world ', while other wrote, 'Aaj extra cute n handsome lg rha hai..Evil eyes off'. Tejasswi and Karan will soon be seen in a romantic music video titled 'Baarish Aayi Hain'. Also Read - Bigg Boss 16: Fahmaan Khan wishes Imlie co-star Sumbul Touqeer for Salman Khan show; 'Aag hai tu'

Sharing the first poster from their upcoming music video, Karan captioned, "The Rain Song of all Rain songs of the season. #BaarishAayiHain out on 14th July. On the @vyrloriginals Youtube channel. This one is special".