As Disha Parmar awaits his return from Khatron Ke Khiladi 11, Rahul Vaidya said that he might think of quitting the show just the way he had decided to leave Salman Khan's controversial reality show Bigg Boss 14.

Disha Parmar seems to be missing her boyfriend Rahul Vaidya a lot ever since the singer flew to Cape Town to shoot for Rohit Shetty's stunt-based reality show Khatron Ke Khiladi 11. The two have been expressing their love for each other and filling social media with their loving PDA. As Disha awaits his return, Rahul said that he might think of quitting the show just the way he had decided to leave Salman Khan's controversial reality show Bigg Boss 14. Also Read - Rhea Chakraborty, Alia Bhatt, Disha Parmar and more celebs from Bollywood and Television industry were trolled this week – find out why

Disha took to her Instagram to share an adorable picture of them loving gazing into each other's eyes and blush at the same time. "Counting the Days now.. Can you just come back already? #countdownbegins," Disha captioned the post. To which, Rahul replied, "bas aa gaya (almost reached).... 3 2 1” However, in his another comment, Rahul said, "Soch raha hoon ye show bhi exit kar doon (thinking of exiting this show too).. miss you @dishaparmar.” Aly Goni also joined the couple in the comment section and took a dig at both Rahul and Disha saying, "He just have to say “Abort” and that’s it ?? he will be with u in next two days." Also Read - Khatron Ke Khiladi 11: Abhinav Shukla and Rahul Vaidya do a 'romantic' task; latter exclaims, 'Disha se bhi itna close nahi hua hoon' – Watch 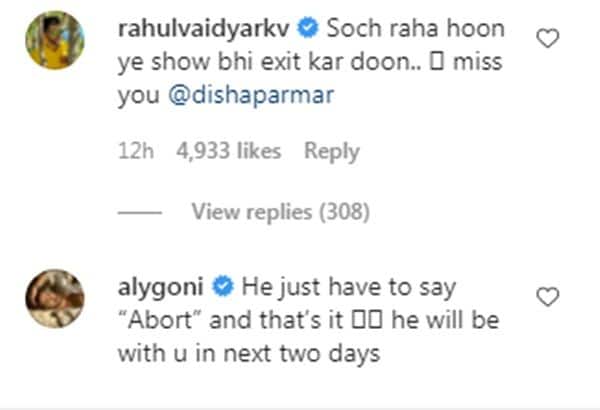 If one may recall, Rahul had taken a voluntary exit from Bigg Boss 14 saying that he was feeling homesick. After walking out of the show, he thanked fans for supporting him during his stint in the reality show where he showcased his singing talent, as well as personality. He was mostly in news for his fights with Jasmin Bhasin and Rubina Dilaik. Rahul had a journey of over 140 days in the house. He was happy that he reached the final two. He lost out to Rubina Dilaik whom he had a love-hate relationship with.

During his journey in Bigg Boss 14, Rahul had proposed Disha on her birthday. Later, when Disha entered the house, she said yes to Rahul when he once again went down on his knees for his lady love on national TV. Talking about the plans of wedding, Rahul said that he doesn't want to waste time. He said that Disha is the most beautiful thing that has happened to him and can't wait to start his life with her.