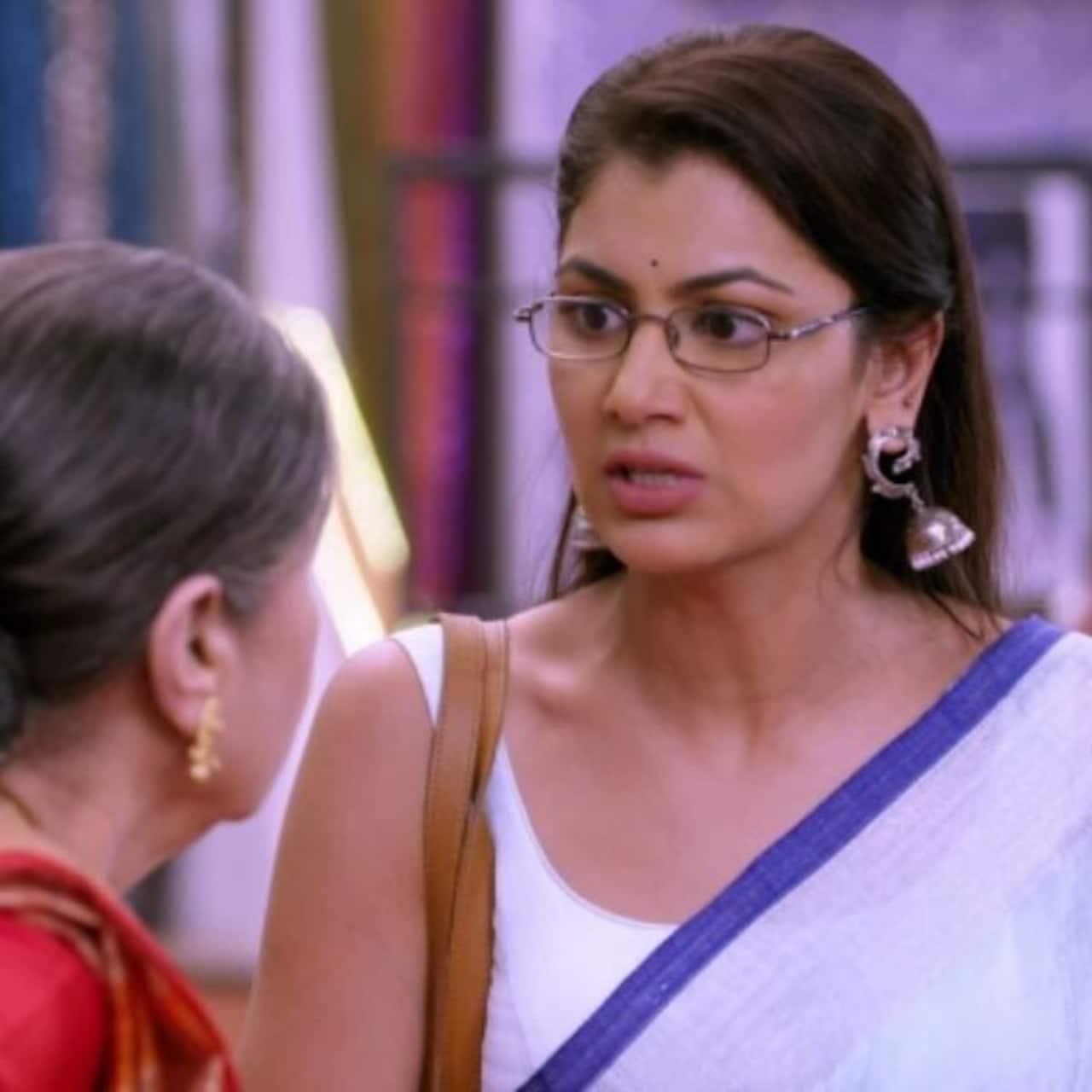 In the last week of Kumkum Bhagya, we saw that Saloni learns about Rhea’s identity. She calls Prachi behind the college to inform her about Rhea. But Rhea notices the same and she manipulates Saloni by emotionally blackmailing her saying that Prachi is trying to take Ranbir away from Rhea. Meanwhile Ranbir and Prachi share a romantic moment as Ranbir pours flower petals on Prachi to please her. On the other hand Abhi reaches to Pragya’s house which he knew. But he finds that Pragya has shifted from there. He gets hurtful but keeps the flowers there which he had brought for Pragya. Just when he leaves from there, Pragya arrives there to pick Sarita’s spice boxes. She finds the roses and learns that it must be Abhi who would have come there to meet her on Valentine’s day. Also Read - Taarak Mehta Ka Ooltah Chashmah continues to rule; Anupamaa regains position; Bigg Boss 16 makes a surprising jump on Most-liked Hindi TV shows list

Tonight’s episode begins with Pragya coming back to the old house. She takes the flowers and keeps brooding about why Abhi is upset with her. She then decides to call Purab to find out. But Purab’s number doesn’t connect. So she calls Vikram to find out if he has another number for Purab. Vikram informs Pragya that Purab is on a business trip to Italy. Pragya gets disappointed. So she leaves the flowers and gets into a cab. But she turns back as she gets emotional so takes the flowers with her. On the other hand Ranbir and Prachi fail to find Saloni in the college. They decide to wait till evening for her call back. Both of them go back to their classes. But while going, Prachi overhears Maya talking to Rhea. So she decides to follow Maya. She takes Ranbir with her. She becomes suspicious that Maya must be talking to the same girl who had gone to Saloni’s house with money. Ranbir also feels that the girl they are talking about is the mastermind. Ranbir tells Prachi that because of her, he has become confident in life. Prachi fears if her confident makes him fail. Maya becomes suspicious that Ranbir and Prachi are following her. Also Read - Bade Achhe Lagte Hain 2: Aalisha Panwar to join Niti Taylor and Ranndeep Rai after leap? To play THIS character

By then a truck comes in between so she cannot see them. But Ranbir fails to keep track of Maya’s car. But then they find her car. Maya turns back but Prachi and Ranbir bend down so that Maya cannot see them. Rhea calls Maya as she reaches to the entrance of the mall. Maya asks her to wait for her. Ranbir and Prachi also reach to the mall following Maya. On the other hand Pallavi confirms with Vikram whether Prachi’s mother. Vikram tells her that Prachi’s mother is dicey about the decision of joining their cafeteria. Vikram asks Abhi to convince Prachi’s mother for the business proposal. On the other hand Pragya reaches home. She looks upset. Sarita finds the roses in her bag. Pragya reveals that Prachi’s father gave her the roses. Shahana arrives there questioning about the same. Sarita pretends that she has got roses from Prachi’s father. Sarita also asks Pragya about her decision. But Pragya is still confused. Sarita then asks her to help her as they have an catering order next day. Then Sarita goes with Shahana for shopping. Also Read - Ghum Hai Kisikey Pyaar Meiin to Anupamaa; Top TV shows where mystery child track kept the TRPs soaring

Meanwhile Maya enters the mall. She waves at Rhea and goes with her. Ranbir and Prachi also enter the mall. But they dont find Maya anywhere around. Both of them get into a cute fight again while Rhea and Maya are shown talking to each other. Maya and Rhea also start some shopping as Maya is going to get engaged. Prachi and Ranbir reach nearby. They keep fighting. Rhea sees them both. She takes Maya away from there. Maya tells Rhea that she should have not got into the issue as she is getting engaged. Rhea asks her to pretend that she was molested. Maya gets upset with her as her marriage might get cancelled. While both of them are discussing, they hear Sarita and Shahana’s voice as they also come there for shopping. But later they leave from there to see more options. Ranbir bumps into Sarita. He tries to hide her seeing Prachi. On the other hand Maya tells Rhea that for her the matter is closed as she doesn’t want to get engaged more.

Rhea requests her to help her. Maya demands for an expensive diamond necklace in return. Rhea gets angry but Maya threatens to reveal the truth if Rhea fails to gift her the necklace. At the same time Ranbir takes Prachi to the trial room next to the one where Rhea and Maya are hiding. Prachi bumps with a cloth stand. She feels pain. Ranbir comforts her. Both of them share some close moments. On the other hand Sarita and Shahana keep fighting as their choices of clothes dont match. Meanwhile Rhea agrees to Maya’s condition for their deal. Later Sarita and Shahana again come to the trial room. They try to open the one where Rhea and Maya are hiding. Maya gets angry. So they try opening next one. They try hard but the door doesn’t open. Prachi by mistake replies asking Shahana not to try as the door might get broken. Ranbir gets panic. Prachi then makes an idea to send Shahana and Sarita to bring a suitable dupatta matching to a dress piece that she gives them from the trial room itself.

So Shahana and Sarita goes for the same. So Prachi and Ranbir come out from the trial room. Rhea and Maya also come there at the same time. Later Maya asks Rhea to wait for her as she needs to talk to her and goes to try out a dress. While Rhea is roaming around, she overhears Prachi and Ranbir talking about the girl with Maya which is actually her. She gets very tensed. Rhea texts Maya asking her not to come there as Ranbir and Prachi are looking for them only. But Maya’s mobile slips down from her hand. She keeps moving towards Rhea. Rhea gets scared. She moves back but bumps into Ranbir. Both of them get shell shocked to see each other like that. Sarita on the other hand informs Shahana that Prachi had called her saying that she need to leave as there was some urgent work. Shahana finds that fishy. In the mean time Maya bumps into Prachi. Prachi confronts her for trapping Ranbir in a fake case. Maya refuses to take the case back but Prachi tells her that she will have to admit the truth. Maya leaves from there in anger.

Ranbir asks Rhea about her being there. Rhea seems to be very scared but manages to pretend that she had come there for shopping. Then she leaves from there and ignores Maya standing right at the exit. Ranbir notices that. Maya also pretends that she is going inside. Ranbir calls Prachi there. He sees Maya going out. Ranbir and Prachi find them together but they feel that Rhea was upset with Maya as she is also angry with Maya for trapping Ranbir. Then Maya also leaves from there. Sarita sees Prachi and Ranbir together. Prachi hides with Ranbir. But Sarita is happy if Prachi and Ranbir are spending some time together. Sarita and Shahana assume that Ranbir and Prachi are hiding from them. Meanwhile the sales girl gives Maya’s dress to Ranbir and Prachi asking them to give it to Maya. Sarita and Shahana challenge each other as Sarita feels that Prachi will admit that she loves Ranbir but Shahana doesn’t agree with her. In the mean time Prachi takes Maya’ dress as they decide to find out what Maya is upto. Prachi then sits on the driving seat saying that she can drive the car on her own. But Ranbir asks her to get out from the driving seat as he learns that she won’t be able to drive. Prachi gets convinced after a while. Stay hooked to find out more.