Kundali Bhagya 9 August 2019 written update: Karan vows to ruin Preeta's life when he is marrying her. Preeta remembers the time Karan told her she would marry a man he chose for her. Karan cries thinking of how much he hates Preeta after falling in love with her.

In the latest episode of Kundali Bhagya, Preeta thanks Rakhi for attending her wedding and not heeding to Karan's blabber. Rakhi and Preeta both feel that Karan's behaviour has changed. Meanwhile, Sammy reaches the wedding to help Karan. He brings along wedding clothes to match Prithvi’s. Karan wears Prithvi’s clothes. He puts on the Sehra and lies to the pandit saying that he has conjunctivitis because of which he can’t look at anyone. He asks the Pandit to make up an excuse but not let anyone see his face at the wedding. Also Read - Kundali Bhagya 15 January 2020 written update of full episode: Sherlyn and Mahira plan to kill Preeta

n tonight’s episode, Srishti and Biji are happy to see Sammy in the house. They ask if Karan is also there. Sammy hesitates and tells them that Karan is not there. Biji doubts Sammy but Sammy goes away with Srishti. Meanwhile, Karan walks out to the wedding wearing the sehra. Also Read - Kundali Bhagya 13 January 2020 written update of full episode: Sherlyn to use Mahira against Preeta

Sarla is taking him to the mandap. He gets shocked when he finds Rakhi walking towards him. Karan begins coughing under stress. They give Karan a glass of water which he drinks while hiding his face. They ask him to show his face but the Pandit announces that nobody can see his face or it will bring them bad luck

Rakhi blesses Karan and Preeta thinking he is Prithvi. Sammy claps and asks the couple to go to the mandap. Srishti wants to know why Sammy is so excited for Preeta marrying Prithvi. When they are at the mandap, Preeta thinks of Karan and the good memories she has of him. 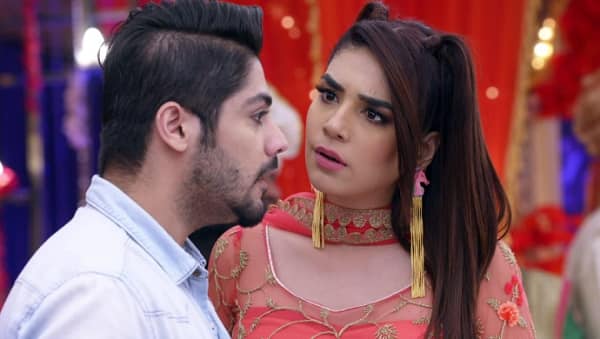 However, for Karan he remembers how much hurt Preeta has caused his family recently. Karan vows to ruin Preeta’s life when he is marrying her. Preeta remembers the time Karan told her she would marry a man he chose for her. Karan cries thinking of how much he hates Preeta after falling in love with her.

The Pandit asks the couple to hold hands. Karan puts out his hand and Preeta places her palm in it. When she touches his hand Preeta feels it is Karan’s hand. Will Preeta realise that the man she is marrying is Karan? Stay tuned to find out.