Mahabharat 13 April 2020 Episode Update: In today's episode the Brahman family is worried because of Monster Bakasur who eats a person every week. Kunti sends Bhim to the cave where Bhim ultimately kills Demon Bakasura giving relief to the villagers of Ek Chakra Nagari 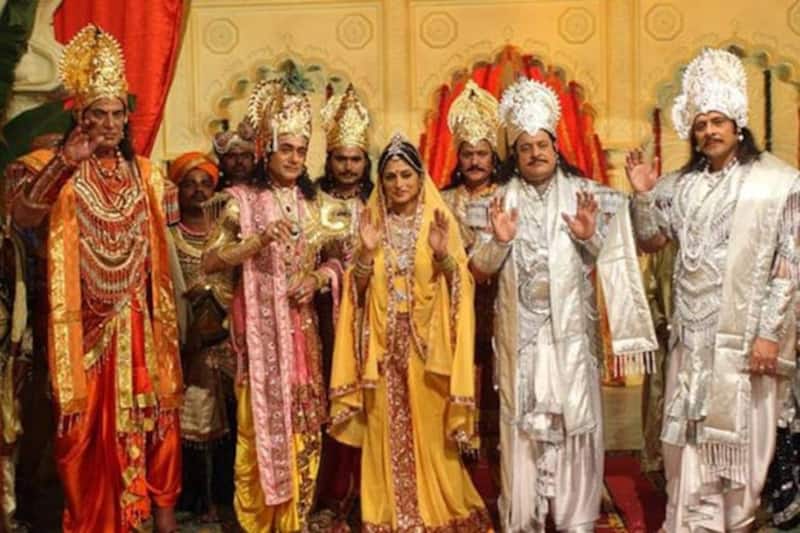 In this time of home quarantine due to Covid-19, we all are very fortunate to relive the era of Mahabharat. In today’s episode Pitamah Bhishm visits Vidur’s house. He gets upset with Vidur as he wants to know about the location of Pandvas. Vidur tries to avoid by diverting the topic but Bhishm insists him for the same. Vidur then reveals that Pandvas are in Ek Chakra Nagari. Bhishm expresses his wish to visit the location but Vidur tells him that his power will not allow Bhishm to go. Bhishm then asks Vidur to keep him updated about the situation Pandvas are going throw. In Ek Chakra Nagari, Pandvas are in a village disguised as Rishis and they seek for Bhiksha at every door even though they are worriers. Kunti is also nicely getting along with a family there. Four brothers Nakul, Sahdev, Yudhishthir and Arjun come back there but they miss Bhim who is not with them from quite a long time. On the other hand Bhim’s wife is sad as Bhim will be leaving her as their baby has taken birth. Also Read - Kim Kardashian body-shames sister Khloe Kardashian on national television; rats on sisters Kendall and Kylie Jenner

Bhim consoles her as he will have to leave from there. He asks his wife to be with their baby as she has more right on the baby being his mother. In the mean time Kunti is serving food to her sons. By then Bhim also arrives there. They all get very delighted to see him. All of them take out some portion of food from their plate for Bhim. Everyone then enjoy meal together. Later on Kunti finds that there is some issue in the family they are living with. She asks the head of the person about the problem. He reveals to Kunti that he will have to become the meal of a Demon. His wife and daughter oppose him as they want to save him. They all are tensed as Demon Bakasur has created havoc in the village and eats a person per week as his meal. The head of that family feels disappointed as there is no one who can fight with the Demon and oppose him as the King of their village also escaped from there. Kunti suggests him to give an opportunity to her sons to fight with the Demon in order to express her gratitude towards the family as they allowed the Pandvas to stay with them. Also Read - Ranveer Singh-Deepika Padukone, Aishwarya Rai Bachchan-Abhishek; when distasteful separation rumours of Bollywood's loved couples grabbed eyeballs

Kunti accordingly discusses about the same with Yudhishthir (Gajendra Chauhan). She tells him that Bhim will be the suitable person for the task which hurts Yudhishthir. Every Pandaav come forward to get ready for the task. But Bhim tells them all of them that he will be definitely able to defeat Demon Bakasur. Rest of the Pandvaas and Kunti are happy to see his confidence. Accordingly Bhim leaves with some food in a Bullock cart and reaches to the area where Demon Bakasur is waiting for him. He then releases the Bullocks to make them rest and starts eating some portion of the food that he has brought for Bakasur. Demon Bakasur is shown sleeping in his cave. He feels presence of someone around his cave as Bhim is right outside his cave. Bakasur gets up and moves towards Bhim as he sees Bhim gobbling up all the food which he is supposed to eat. Demon Bakasur attacks on Bhim but Bhim is also equally powerful. The battle between them begins. Demon Bakasur gets very angry to see someone opposing him. But Bhim beats up Bakasur very badly. Also Read - Ponniyin Selvan: Chiyaan Vikram reveals unknown facts about Cholas and India and it'll make you excited for the film

Bakasur still doesn’t back off. He digs out a big tree and throws it towards Bhim. Bhim also does the same. Demon Bakasur falls down on the floor with Bhim’s attack. Bhim pulls out the horns of the monster and kills the devil Bakasur. Some people are passing by the area. They feel tensed as they all are aware that Demon Bakasur is there. But they get very delighted to see Monster’s dead body lieing on the floor. Villagers of Ek Chakra Nagari discuss among themselves about arranging a veneration as Monster Bakasur get killed which has given great relief to all of them. On the other hand Brahman family is very happy as Bhim came back with a victory. Villagers also thank the Brahman family for sending Bhim for the end of Monster. Kunti tells her sons that it is the time to leave from Chakra Nagari in order to hide their real identity. While the head of the Brahman family is revealing the truth to the villagers, he finds that Pandvaas and their mother are not their in the house. His wife informs him that they all have moved from their house as they need to achieve someone else which is much more than the end of Monster Bakasura. Pandavaas and Kunti move to the forest as they start finding a new halt to stay. Till then they take rest under a tree for some time. Stay tuned for more updates.