Mahabharat 15 April 2020 Afternoon episode written update: In today's episode Pandavaas come back to Hastinapur along with Droupadi and Kunti. 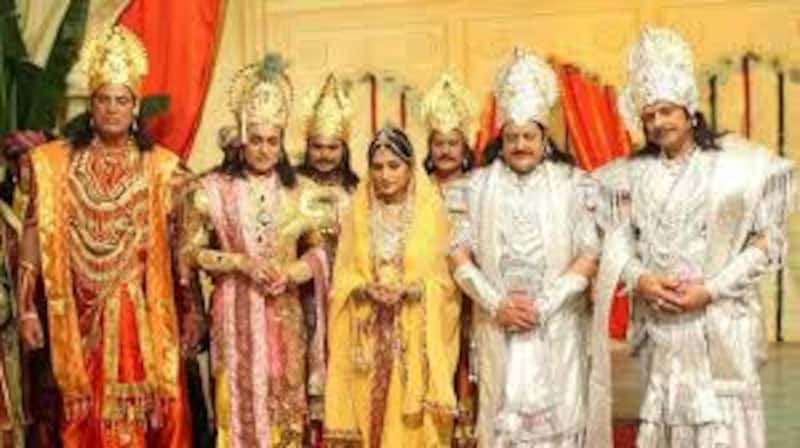 In the last episode we saw that on one side Shakuni provokes Duryodhan and Karna against Pandavaas as he knows that Dhritrashtra is sending Vidur to Kambilya to bring Pandavaas back to Hastinapur along with Droupadi. Accordingly Vidur requests the Pandavaas to come back to Hastinapur with Droupadi. Lord Krishna and Balram also accompany them. Droupadi gets emotional as she leaves from Kambilya. In Hastinapur Dhritrashtra is worried as he doesn’t want to do injustice to Kauravas or Pandavaas. In today’s episode Bhishm is worried as he will have to choose either Yudhishthir or Duryodhan which will lead to injustice to someone. He comes to his mother river to find some solution. His mother asks him to complete his promise he has done to himself. Bhishm then comes back to palace. Shakuni bumps into him. He pretends that he is trying to change Duryodhan’s mindset about Yudhishthir being the Yuvraj of Hastinapur. Bhishm also shares that he is worried for Duryodhan as he is the present of Hastinapur but he doesn’t answer about the future Yuvraj of Hastinapur. Also Read - Bigg Boss 16: Tina Datta reduced to tears as Shalin Bhanot hugs wild card Sreejita De [Watch Promo]

While Duryodhan is discussing with Karna about what Shakuni told him, by then Bhishm enters the room. He asks Duryodhan about what Shakuni told him. But Karna intervenes and asks about his decision about Yuvraj to be selected for future. Duryodhan also gets upset as he fears of Yudhishthir being the Yuvraj. Bhishm assures Duryodhan for not letting his rights stand cancelled. Bhishm seems to be in dilemma. He asks Duryodhan to be patient as currently Yudhishthir and him both are Yuvraj at the moment. Later Dhritrashtra and Pitamah ends up a court session. Bhishm finds that Duryodhan is upset and will not be attending court till the decision is made. In the next moment they all hear that the army men are hailing for Pandavaas as Pandavaas are back to Hastinapur along with Droupadi and Lord Krishna. Everyone welcomes Kunti and Pandavaas with their wife Droupadi. Also Read - Bigg Boss 16: Ankit Gupta fans slam makers for constantly taunting the Udaariyaan actor; say, 'Stop giving fake narrative' [Read Tweets]

Droupadi also seeks blessings from Dronacharya. Everyone seeks blessings from Pitamah Bhishm and Dronacharya & enter the palace. Pandavaas and Droupadi get a grand welcome in the palace. Further all of them meet Gandhari and Dhritrashtra. Droupadi and Pandavaas also seek blessings from Gandhari and Dhritashtra too. Dhritrashtra gets very delighted as he finds his sons safe and alive like earlier. Gandhari also feels that Droupadi must be very beautiful. Lord Krishna and Balram also meet Gandhari and Dhritrashtra. Later Pandavaas take rest. Krishna tells Arjun that he will have to go back home as it is needed. Balram and Krishna have a cute argument over Subhadra. Later on lord Krishna indirectly alerts Arjun about the biggest issue that is going to take place in Hastinapur over power. On the other hand Pitamah Bhishm, Emperor Dhritrastra undertake a meeting with Kunguru Dronacharya, Vidur and Shakuni.

Dhritrashtra reveals the reason for calling the meeting as he is into dilemma as to whether to appoint Yudhishthir as a Yuvraj or Duryodhan. Shakuni pretends that he is supporting Yudhishthir as a Yuvraj. But Vidur and Bhishm think that they need to take the decision very wisely as earlier they had appointed Duryodhan as a Yuvraj when there was a news about the demise of Pandavaas in fire attack. Vidur tells that they should have not taken that impulsive decision. Dhritrashtra takes suggestions from all the great people in the meeting. But Shakuni suggests that Pitamah Bhishm should take the decision. Dhritrashtra agrees with him. But Bhishm is already worried so he puts the way of division of Hastinapur instead which shocks everyone. He requests Dhritrashtra to distribute the property between Duryodhan and Yudhishthir. Later on Dhritrashtra calls up Yudhisthir for discussion of the issue.

Yudhisthir doesn’t understand initially as Dhritrashtra keeps the issue in front of Yudhishthir indirectly. But later on he reveals that Hastinapur will be divided between Pandavaas and Kauravas. But Yudhisthir asks him to give the complete share to Duryodhan. But Dhritrashtra doesn’t want to do any injustice to Yudhisthir. Yudhishthir then respects the decision and agrees to obey the same. Dhritrashtra is relieved from the tension. Will this be acceptable to Duryodhan? Stay tuned for more updates.