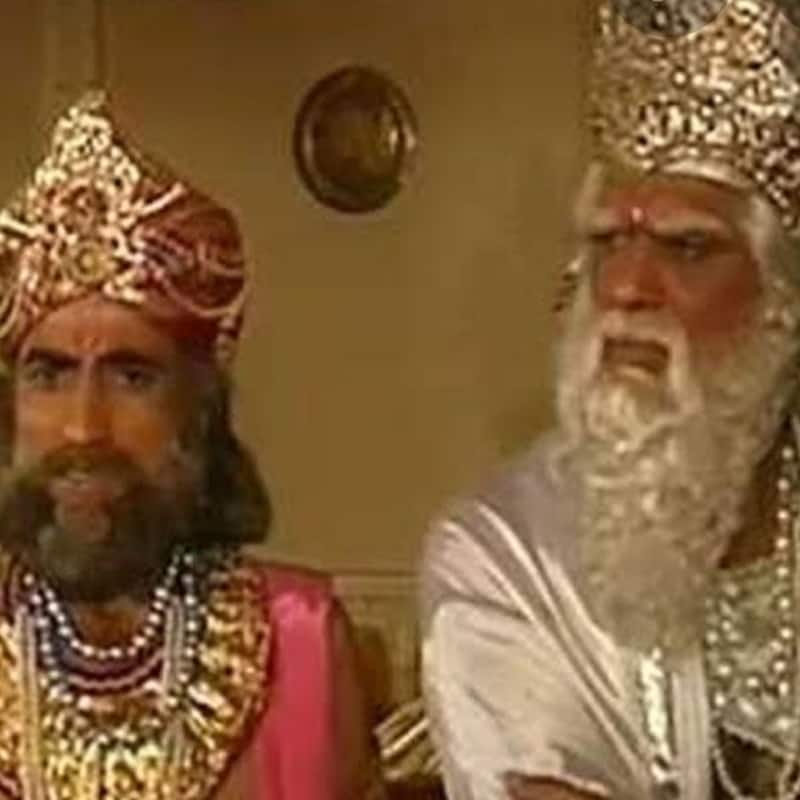 In the last episode we saw that Lord Krishna tells Yudhisthir that Khandarprastha will be the Karma Bhoomi for Pandavaas so coronation of Yudhisthir will be required. So rest of the brothers of Yudhishthir decide to support their elder brother. In today’s episode Kunti asks Droupadi to do the honours of tilak of Yudhisthir. Kunti also asks him to take complete responsibility of Droupadi completely. She also hands over her sons to Droupadi and asks her to take care of them. Droupadi agrees for the same but seeks Kunti’s blessings for the same. Later on all of them except Kunti move for the court. Priest starts the rituals of coronation of Yudhisthir. Everyone witnesses the same in the court. But Karna and Shakuni discuss about Duryodhan as he is not present there. Shakuni tries to provoke Karna saying that Duryodhan is upset as he didnt get half of the property. But Karan tells him that Duryodhan should be happy with what he has got. By then Pandavaas enter the court with Droupadi. He seeks blessings from Dhritrashtra. Vidur makes Yudhisthir and Droupadi sit right beside Gandhari. Also Read - Brahmastra to Mahabharat; upcoming trilogies in Bollywood that promise to shatter box office records [Watch Video]

Dhritrashtra declares that the property will be divided between Duryodhan and Yudhisthir with permission of maximum members of the court. In the next moment Maharshi Ved Vyas enters the court. He blesses Pandavaas and Kauravaas. Shakuni introduces Karna to Maharshi Vyaas. He blesses Karna too. Lord Krishna also meets Maharshi Vyas. Gandhari, Dhritrashtra along with Ydhishthir seek blessings from Maharshi Vyas. Maharshi Vyas asks him to acquire his rights. But he doesn’t give any blessings to Droupadi but asks her to take care of her hair. Everyone wonders about it. The process of Yudhishthir’s coronation event begins. He is given the honour of Emperor. Everyone hails for Yudhisthir. Yudhisthir seeks blessings from his elders. Pitamah Bhishm blesses Yudhisthir and asks him to take care of Hastinapur with humanity. Yudhisthir also gets blessings from his Guru Dronacharya, Vidur. Later Yudhisthir and Droupadi join hands to all those present in the court. Also Read - Ajay Devgn, Akshay Kumar, Ranveer Singh in Mahabharat; multi-starrer film to be made in 5D at this whopping budget?

They all leave for Khandarprastha. Lord Krishna and Pitamah also accompany them all. Lord Krishna asks Pandavaas about whether they liked their Karma Bhoomi Khandarprastha. Arjun is confident that they all will convert it into heaven with Lord Krishna’s blessings. They all then start land worship. Afterwards they all start walking ahead and observe the land so that they can plan accordingly. Lord Krishna and Balram help them in providing the land instruments to plough on the land. Pandavaas succeed eventually in cultivate the land into a green land. Many beautiful flowers, green leaves arose in the land making it look like heaven. Arjun and rest of the Pandavaas express gratitude for Lord Krishna’s guidance. They all succeed in building a big palace for them. Kunti is happy with the success of her sons. Yudhisthir then sits in the court along with his brothers. Lord Krishna also tells Arjun that Indraprastha is not the ultimate goal for Pandavaas as Duryodhana is yet to wage war against them because his ego is hurt. Stay tuned to find out more updates.