Mohit Abrol claims his Instagram account was hacked: Someone wanted to defame Mansi and made a bad story

Mohit Abrol and Mansi Srivastava were supposed to get engaged, after being in a relationship for eight long years. However, things went awry between the couple and the TV actors parted ways.

Mohit Abrol is hitting headlines about his break-up with Mansi Srivastava, several months after the two parted ways. The couple was supposed to get engaged, after being in a relationship for eight long years but parted ways this year. However, yesterday in a shocking Instagram post the Porus actor revealed that the Divya Drishti actress cheated on him and how he tried to kill himself with sleeping pills. Also Read - Mohit Abrol opens up on his breakup with Mansi Srivastava, says she cheated on him with Arhaan Behl

Living Memories The things that make us or break us . Good or bad . Happy or sad . Memories are what you have and will will always have . They don’t leave you . They come back to you every time . Your memories haven’t left me . They cajole me every moment of my life . I’m inspired by them . They are the only one which keep me going . First time we met , the way we looked at each other can’t forget that . First time we made love , our first fight . Even when I was having the worst of my days just looking into your eyes made me feel better about myself . You gave me happiness in my saddest moments . I have been living with them and I will always do . You are the best thing that happened to me . They provide me with strength and happiness . They are all I have left of you . They will never ever part with me , yours are here to stay . They are what makes me , me . Even you can’t take them away from me . Mohitvijayabrol

However, the actor later stated that his account had been hacked and the post, which gave private details of Mohit and Mansi’s relationship, was posted by someone with malicious intentions. Mohit wrote on Instagram, “Guys someone hacked into my Instagram profile and posted this picture from @dearmansi facebook profile. When I got to know about it in the morning I deleted the post at 7.30. I secured my account. All the sites jumped onto it, nothing that was mentioned in that post is true. Someone wanted to defame Mansi and made a bad story. I'm really saddened and disgusted by the person who did it. I'm launching a police complaint about the same. This news has deeply impacted our families and us. I request all the websites and newspapers to retract the story ASAP. We both will be great full for it.” However, this post also was deleted in a short while. Here’s a screenshot of his note: Also Read - Mansi Srivastav to bid adieu to Divya Drishti? Here’s what we know The previous post, which Mohit alleged was done to defame Mansi read, “Wanted to see her again, to say goodbye the way I wanted. Then I realised if I got my way, I would never say goodbye How hard is it to say goodbye to people you really love and care. It's like cutting away a part of your body and throwing it away. I'm content that you moved on. I have loved you truly, for me it was forever Then I realised that nothing lasts forever. Forever is a lie You moved on while still engaged to me but what hurts the most is it's not the first time you did it. I know it WONT BE THE LAST. Don't use your new lover like you used me or don't use him for eight long Years. You lived in with me for all this time like a wife. I took all your responsibility and what I got in return From Delhi to Mumbai, I took care of everything from your finances to driving you to auditions I did everything for you what a husband does. Living in for eight years with you made me responsible. I gave you my eight long years, eight years of mine.I didn't care about my career, my health all I cared about was you Even when you had an affair with Arhaan and I tried to kill my self with sleeping pills, I got up after 3 days in ICU and you weren't even there. You were never there when I needed you. I had let you go that time but when Arhaan left you you tried coming back and made my life hell made my life hell. I finally took you back thinking you have changed was mistaken, I regret that moment when I took you back. It should have been over then only." In the end, the note also also revealed that Mansi is currently dating a photographer named Kapil Tejwani. "Anyway I'm proud that I survived whatever you did to me but karma isn't so kind you will get what you deserve not now but you will till then have a ball with your new lover Best of luck Mansi Srivastava @dearmansi and Kapil tejvani @kapiltejwani Please don't use him and boy don't get used." 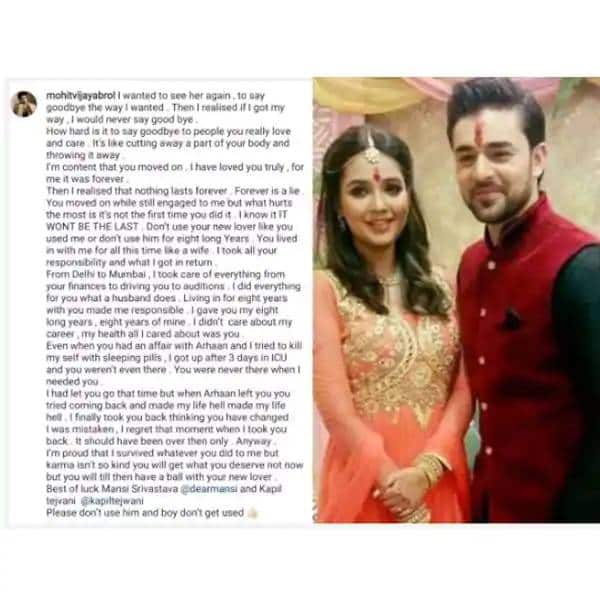