The petition on the website reads- "David Benioff and D.B. Weiss have proven themselves to be woefully incompetent writers when they have no source material (i.e. the books) to fall back on. The series deserves a final season that makes sense. Subvert my expectations and make it happen, HBO!

The last two episodes of D. B. Weiss and David Benioff's Game Of Thrones season 8 have been receiving a lot of flak and criticism on social media. Fans who have followed the show since it's inception found the beheading of Nathalie Emmanuel's Missandei, one of the few non-white characters, anti-climatic and unsatisfying. The followers were enraged more after episode 5 of GOT season 8. They were of opinion that Emilia Clarke's Daenerys Targaryen's violent turn into the Mad Queen Daenerys, who torched the innocents of King's Landing, wasn't necessary. In a bid to have a better end to their fav show, more than 1,70,000 fans have signed a petition on Change.org to get the entire season remade with competent writers. Also Read - Scam 1992 achieves new feat by becoming the top Indian series in IMDb list of highest-rated TV shows worldwide

The Mad Queen. What do you guys think about this?!

The petition on the website reads- "David Benioff and D.B. Weiss have proven themselves to be woefully incompetent writers when they have no source material (i.e. the books) to fall back on. The series deserves a final season that makes sense. Subvert my expectations and make it happen, HBO! However, it looks like the makers won't be able to remake the season considering that the last one is the most expensive one. Also Read - Jagame Thandhiram Trailer: Dhanush looks set to hit it out of the park once again as the witty gangster 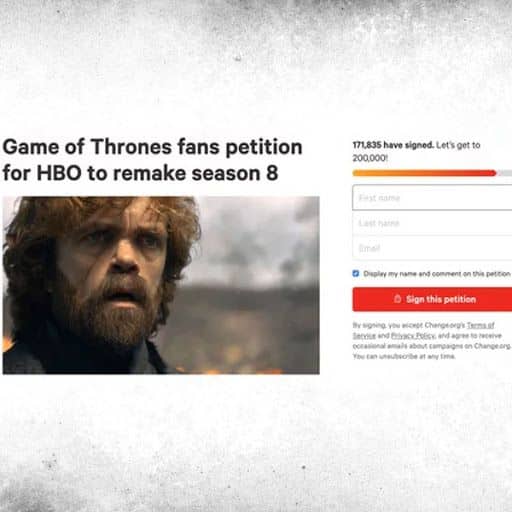 Meanwhile, in a bid to avoid the harsh and nasty comments from fans after the final episode of GoT season 8, the makers have a foolproof plan. In an interview with Entertainment Weekly, they said, "We'll be in an undisclosed location, turning off our phones and opening various bottles. At some point, if and when it's safe to come out again, somebody like [HBOs 'Thrones' publicist Mara Mikialian] will give us a breakdown of what was out there without us having to actually experience it."

CONTAINS SPOILERS.❗️ DISCUSSION FOR SEASON 8, EPISODE 5 ❗️ - What did you guys think of the newest episode?!

David Benioff added that he will be very drunk and far away from the internet after the finale. However, he further said, "We want people to love it. It matters a lot to us. We've spent 11 years doing this. We also know no matter what we do, even if it's the optimal version, that a certain number of people will hate the best of all possible versions. There is no version where everybody says, 'I have to admit, I agree with every other person on the planet that this is the perfect way to do this' — that's an impossible reality that doesn't exist. You hope you're doing the best job you can, the version that works better than any other version, but you know somebody is not going to like it."

Now, it remains to be seen how the makers react to the demand of their viewers. Stay tuned to BL for more updates!