Alia Bhatt took to Instagram to write a sweet note for Mouni Roy and Suraj Nambiar. She shared a picture from their wedding mandap.

Mouni Roy and Suraj Nambiar are now wife and husband. They got married on January 27 in Goa. They first got married according to Malyali traditions and in the evening according to Bengali customs. The pics of the couple are out on the internet and many celebs are wishing the newlyweds. Alia Bhatt took to Instagram to write a sweet note for the couple. Sharing a picture from their mandap, Alia wrote, “Congratulations Moun! You look so beautiful and happyyyyy!!!! Wishing you both all the love in the world!” Her wish also had hear emojis. Have a look at her post below: Also Read - From Ranbir Kapoor-Evelyn Sharma to Sidharth Malhotra-Jacqueline Fernandez: 5 times actors lost control while doing intimate scenes 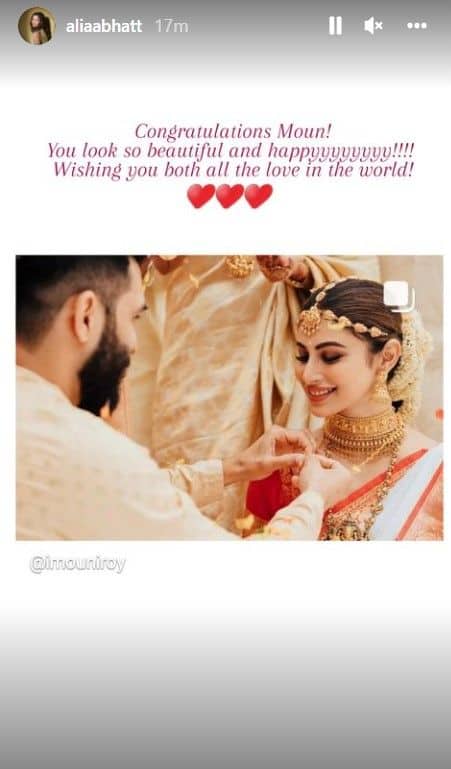 Also Read - From Aryan Khan to Alia Bhatt: A look at the most SHOCKING controversies of 20 star kids

Earlier, Sharing the pictures from her Malyali ceremony, Mouni Roy wrote, "I found him at last ..Hand in hand, blessed by family & friends, We re married!!!!!!!!!!! Need your love and blessings…27.01.22 Love, Suraj & Mouni." Also Read - Cannes 2022: Aishwarya Rai Bachchan steps out for lunch with Abhishek Bachchan and Aaradhya; netizens troll them, 'The entire family needs a better stylist'

In a video that went viral yesterday, we could see Mouni and Suraj dancing on ‘Mehendi Hai Rachne Wali, Haathon Mein gehri laali’. They looked cute together.

Mouni and Suraj got into a relationship two years ago. Suraj is a Dubai-based businessman. While the functions are happened in Goa, a wedding reception was reportedly scheduled in Mumbai. But owing to the spike in the number of Covid cases, it has reportedly been called off.

On the professional front, the actress will next be seen in Ayan Mukerji's Brahmastra. The film also stars Alia Bhatt, Ranbir Kapoor, Amitabh Bachchan, and others.