Naagin 4's Nia Sharma wishes to get back on set; shares this BTS throwback pic

Naagin 4 actress Nia Sharma wishes to get back to shooting soon. She shares a BTS throwback picture from the set and calls it the purest moment. Check out the whole story to find out more.

Nia Sharma is one of the most talented actresses and has been the most loved as well. She was loved for her role as Manvi in Ek Hazaaron Mein Meir Behna Hai. Her performance in that show made her popular and she proved that she is no less than anyone. Later we saw her in Jamai Raja opposite Ravi Dubey and they both became the most popular Jodi on television. Nia Sharma's brilliant performance got her many awards and was the most favourite of the fans. Jamai 2.0 released on OTT which surely is one of the best performances of Nia Sharma and Ravi Dubey. She has nailed every performance of her and not to forget she also is the fashionista of television. Her pictures on Instagram will make you fall for her beauty. Nia Sharma was recently a part of Naagin 4 and we got to see her as Naagin on-screen as well. Naagin has been the most loved franchise and one could have never thought that Nia Sharma would turn Naagin. Also Read - Sun, sand and romance: Nia Sharma's dreamy beach video in a white bikini is TOO HOT to handle

She played the role of Brinda and her sizzling chemistry with Vijayendra Kumeria created magic on-screen. However, the show could not do well and the lockdown imposed due to the coronavirus outbreak in the country made it even worse for Naagin 4. Ekta Kapoor recently announced that the show will be going off-air soon. However, Nia Sharma will be shooting for the finale of Naagin 4 and after that Naagin 5 will go on-air. Nia Sharma has been missing shooting and wants to get back to shoot life soon. Her latest post on her Instagram stories suggests so. She shared the purest moment from sets which included the picture of Lord Ganesha with a thaali of art. Along with picture she wrote, "The purest moment on a set any given day! I wish it all comes back soon." Also Read - Bigg Boss 15: From Disha Vakani to Rhea Chakraborty – these celebs might lock horns in Salman Khan's controversial reality show 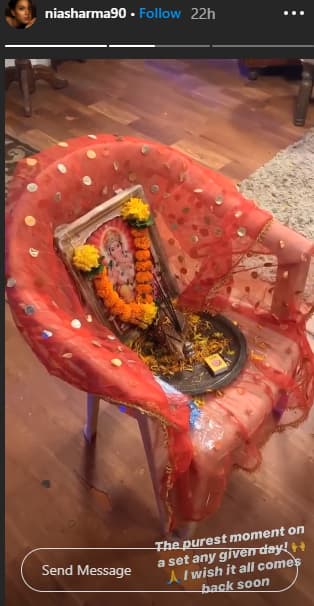 Well, even fans are waiting to see Brinda back on Naagin 4.