We had earlier asked fans who they want to see as the male lead in the new season of Naagin and fans have given their verdict. They want Shivin Narang to be a part of the supernatural show.

Ekta Kapoor's Naagin franchise is the most loved one on television. Since the first season, all the episodes have been the favourite of the audience. Recently, Ekta Kapoor announced about the fourth season going off-air. Naagin 4 had begun in December last year. It was stopped midway when the shoots of TV and films were stopped due to lockdown as a result of the COVID-19 pandemic. The TRPs of the show fell in the few episodes. The makers then got Rashami Desai to play another lead in the show alongside Nia Sharma and Vijayendra Kumeria. This did work for the show for a few days but later the TRPs dropped again. The season 4 could do well as the previous seasons had done. Just a few days ago, Ekta Kapoor announced about the end of Naagin 4 and gave fans a surprise as she revealed that she will be back with Naagin 5. This news has been a gift for all Naagin fans and they have started talking about who will be the new Naagin of this season and the male lead. Also Read - Naagin 5's Surbhi Chandna's glamourous pictures prove why she is called the fashionista

Many names of actresses have come forward who can be a part of the show. It was reported that Mahek Chahal was approached to play the new Naagin in the show. Then reports of Yeh Rishta Kya Kehlata Hai fame Hina Khan and Ishqbaaaz fame Surbhi Chandna being approached were also doing rounds. Dipika Kakar Ibrahim's name was also taken and we also saw reports of the male leads. Shivin Narang, Asim Riaz and Paras Chhabra's names flashed in various news pieces. We have always seen that Naagin has two female serpents and one male lead have the center stage. Well, Naagin 5 won't be different it seems. We had earlier asked fans who they want to see as the male lead amongst Shivin Narang, Paras Chhabra and Bigg Boss 13's Asim Riaz. Fans have chosen their favourite, and they want Shivin Narang to play the male lead in the show. Shivin Narang received 48% of votes while Bigg Boss 13's runner-up Asim Riaz got 35 %. Paras Chhabra received 17%. Check out the results here: Also Read - Ishqbaaaz actress Surbhi Chandna's alluring pictures will set your hearts on fire 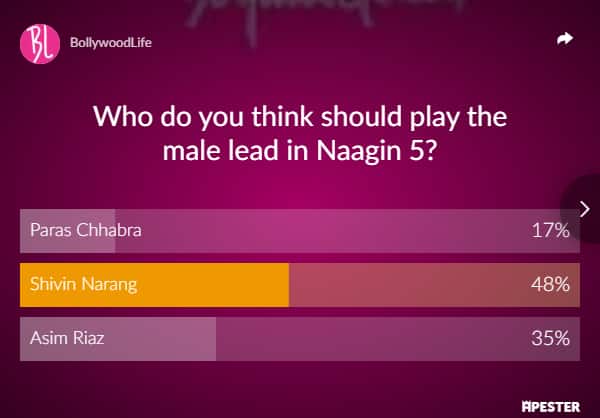 It surely would be interesting to see Shivin Narang in a supernatural show.